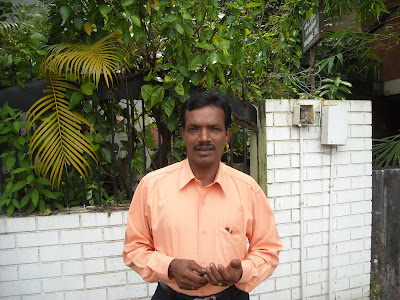 Babu Kalayil has foretold many events including the 2004 tsunami, as well as the recent earthquake and tsunami in Japan. He talks about this gift of extra-sensory perception

On some nights, moments before he goes to sleep, Babu Kalayil feels his head become hot. Soon, he hears a buzzing sound in his ears. These are all precursors to a vision that he sees through his 'inner eye' or imagination. It lasts for a couple of minutes and then vanishes. “Thereafter, I can recall the image, and try to understand its meaning,” he says.

In September, 2004, Babu saw this visual of water receding from a shore and then coming back and hitting the banks with great force. “I could see people being swept away,” he says. “When I told the press about this, the Malayalam media did not pay any attention, but the Tamil newspapers did so." On December 26, the tsunami hit Japan and parts of south India also, including Kerala. "I was vindicated,” he says.

All India Radio journalist, Biju Mathew, who featured Babu in his documentary on predicting natural disasters for the United Nations Economic and Social Commission for Asia and the Pacific, says: “Babu told me of the recent Japanese tsunami and earthquake one month before the event. He also predicted the earthquake, which measured 3.6 on the Richter scale that took place recently in the Kottayam and Idukki districts.” Babu also spoke about the 2002 earthquake in Gujarat, long before it happened.

Babu saw his first vision when he was 24 years old. “I felt that that I had lost my mind," he says. Puzzled and worried, Babu did research and discovered that he has extra-sensory perception. "When your sixth sense comes awake, you will be able to see visions, like I do," he says.

Babu is now predicting that the Mullaperiyar Dam is in trouble. “By 2015, there will be a strong earthquake where the dam is located,” he says. “A part of the structure will get damaged.”

Recently, Babu, who is based in Thiruvananthapuram, met Chief Minister Oommen Chandy and apprised him about his fears regarding the dam. He says that the government has set up a committee and Rs 3 crore has been allotted to find out about the likelihood of an earthquake.

Not surprisingly, many people call him a fraud. “But I have been vindicated many times,” he says. “Initially, my own friends spoke against me. But now things have changed and they have accepted my gift.”

One who was a skeptic before was Dr. Arul Prakash, a sociologist with the Tamil Nadu Open University at Nagercoil. “I got interested in Babu when Tamil newspapers published his predictions,” he says. “But what surprised me was that each time he turned out to be right.” Dr. Arul says that the government should take what Babu says seriously.

“Babu has the gift of Extra-Sensory Perception (ESP),” he says. “Very few people possess this. In countries like Japan, Australia, and America, universities have set up special ESP departments, where they can study this phenomenon.”

The unusual thing about Babu's gift is that he can only predict natural disasters and what takes place in outer space. And although this will sound fantastic, he has brought out a book on a new planet that he has discovered.

It is called Demigo and is located 270 million kilometres from earth. “The trees and mountains are red or pink,” he says. “There are birds, but unlike on earth, they have four wings.” The animals are two-legged, while there are also beings, 4.5 ft. in height, who walk very fast, with their arms are held firmly by their sides. “When they talk, their lips move, but no sound comes out,” says Babu. “They wear gowns that cover their body from head to foot.” He also describes in details their habitat and mode of travel.

Is this far-fetched? Consider this news: Astronomers have discovered 50 new distant planets, including one that could be habitable. An extrasolar planet is outside the solar system. So far, 605 extrasolar planets in 508 systems had been identified.

Meanwhile, in order to prove that Demigo exists, Babu got in touch with the Washington-based National Aeronautics and Space Administration. Robert F. Rotella, senior patent attorney, wrote a letter asking Babu to “send a proposal to seek a grant for further development of your ideas.”

The most unusual aspect of Babu is his eyes. Black in colour, the eyes look strange and ethereal. They give the impression that Babu does not live on Planet earth; instead, he is travelling vast distances through his inner eye.

Only time, and a rigorous scientific examination, which Babu says he is willing to undergo, will confirm whether his gift of seeing the future is genuine or not.