A rose that keeps blooming 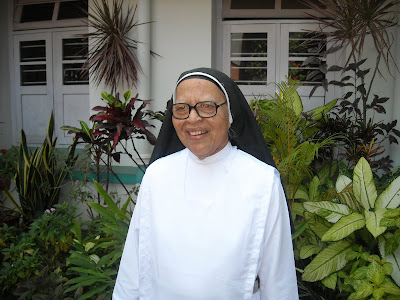 The former and present faculty of St. Teresa's College will be celebrating Sr. Mary Rose's 90th birthday on December 2. The nun was head of the English department for many years

A couple of days ago, Seema Mohan came to see Sr. Mary Rose, the former head of the English department at St. Teresa's College. Sr. Mary Rose remembered her former student, because of one unforgettable incident, which happened 25 years ago.

As a student Seema was a good singer, and was about to go for a programme. Since she had a stomach pain, she took several Crocin tablets. Unfortunately, she suffered from a perforated intestine and had to be rushed to the hospital. “We talked about this and all the happy memories of those days,” says Sr. Mary Rose, who turns 90 on December 2.

On another occasion, she met another former student, Joanne Mathew (name changed). And the nun remembered how in college, Joanne was so bad in English that she could not write a single word properly. But Joanne persisted, with encouragement from Sr. Mary Rose. “Eventually she got a doctorate in English,” says the nun. “It was a proud moment for me.”

So what is the best part of teaching? “It is the heart-to-heart relationship between a student and a teacher which lasts for a lifetime.”

But there are times when Sr. Mary Rose feels bad. A few years ago, she read in the newspaper about a suicide by one of her students. “She stayed in the hostel when I was the warden,” says the nun. “I felt sad that she could not withstand the trials and tribulations of life. It seemed as if my own child had died.”

Sr. Mary Rose has a ramrod back and a sharp mind and can recall names and dates easily. And she remembers the day when she wanted to become a nun. She was in Class eight at the St. Joseph's Girls Higher Secondary School at Alleppey. It was during the Catechism class that Mother Linda casually said, “Jesus Christ has a special love for virgins.” Sr. Mary Rose felt something hit her heart. “I thought to myself, 'Why can't I have that special love?'” she says. “That was the day I developed my vocation to be a nun.”

But it would take years, including opposition from her family, before she became a Carmelite nun. She began her teaching career with stints at St. Joseph's, Alleppey, the Assumption College in Changanacherry, the Holy Cross College in Trichy, before she joined the English department of St. Teresa's College in 1955. She retired as Head of the Department (HOD) in 1982, and continued for another ten years in an unofficial capacity, because her successor had fallen ill. “I taught till I was 70,” she says.

And she has a circle of admirers. “Sr. Mary Rose was a strict disciplinarian,” says Betty Kuriyan, a former HOD. “To create fellowship among the teachers, she would hold monthly gatherings.” Adds Annie Jacob, another HOD, who retired in 2008: “We would be sure that Sr. Mary Rose would not take sides and would be impartial always.”

On December 2, the former and present faculty will be celebrating the ‘Navadi’ (Ninth decade) of Sr. Mary Rose at a function at St. Teresa’s. “There will be a Mass, the cutting of the cake, several felicitations, followed by lunch,” says Betty. “We want to show our appreciation to her.”