Helping others in times of trouble 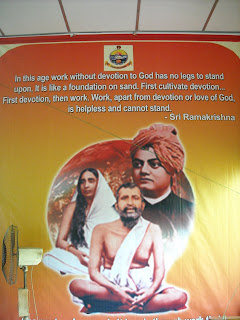 The Ramakrishna Math runs free dispensaries, tuition classes and personality development programmes for students, as well as courses in spirituality. Serving God through human beings is the math's motto

One evening, Swami Atmaswarupananda, 61, the president of the Ramakrishna Math at Vytilla was going for a walk. Some children came rushing towards him. "Please come to our house," they said. So he accompanied them. It was in a remote area, near Thykoodam; there was no road, just a mud path.

He entered one house: a woman lived there with two children. "I enquired about the husband and she replied that he had committed suicide," says the Swamiji. Apparently, he had a small shop near the Town Hall, had taken too many loans, and was unable to pay it back.

The Swamiji asked her to send the children to the Math for free meals, tuitions, uniforms and books. "The problem with most Malayalis is that they will never ask for help," he says. "They keep everything bottled up, and one day when the burden becomes too much, they commit suicide."

The Ramakrishna Math runs free tuition classes, from 4.30 to 6 p.m., for students of Classes five to ten every day. Most of the children come from financially disadvantaged families.

The Math also runs a free dispensary, on alternative days, in homeopathy and allopathy. There is an ayurvedic consultation, by Swami Nirmalananda Giri, but that happens once a month. "There were 334 patients on his last visit," he says.

Allopathic doctor T.K. Karunakaran says that most of the patients are elderly women who have been abandoned by their husbands or have been divorced. "All have financial hardships," he says.

Swami Sutapananda, who is responsible for the smooth functioning of the dispensary, bemoans the culture of selfishness in Indian society. "Even sons have abandoned their mothers," he says. "There is a need to develop one's spirituality."

With this aim in mind, the Math conducts personality development classes for high school students. The speakers include Swami Atmaswarupananda and Jayashree Sukumaran, former Deputy Director of Collegiate Education.

"The students are made to realise that what they learn at school is not the ultimate truth," says Jayashree. "Science is only concerned with the objective world and does not answer the fundamental questions of life: Who am I? Where do I come from? Where am I going?"

In feedback essays by students, Gowri Gopakumar says, "The course has helped me to find the answer to the question, 'Who am I?'" Says Minju Mary Raj: "I understood that there is no difference between a Hindu, a Muslim and a Christian."

On Sundays, there are classes on the Upanishads. Among the regulars is Dr. Sarala Somasundaram. "I am looking for spiritual fulfillment," she says. "It is only through the Upanishads you can get an idea of the essence of existence. And the way the Swamiji speaks, he makes it so interesting and impressive."

What is also impressive are the new buildings which have come up in the past two years. There is a conference hall, an administrative office, and a building which constitutes the living quarters for monks, as well as for visitors.

"We were able to construct all this, thanks to the donation of Rs 12 lakh from the Life Insurance Corporation of India, Rs 10 lakh from the Cochin Refineries Ltd., as well as numerous individual donors," says Swami Atmaswarupananda.

In one of the new buildings, there is a splendid exhibition on the life and times of Sri Ramakrishna. Opposite the entrance, there is a store which sells books on Sri Ramakrishna, as well as the numerous books written by his most famous disciple, Swami Vivekananda.

Monks in saffron clothes move around with serene faces and easy smiles. All of them opted to the spiritual life at a young age. When Swami Atmaswarupananda was 20 years old he read an article in Sree Ayyappan magazine about a speech given in New York in 1896 by Swami Vivekananda called 'My Master'. In the magazine, there was an advertisement of the Ramakrishna Math. He ordered a book by Swami Vivekananda.

"When I read that Sri Ramakrishna had seen God there arose in me a desire to see the Supreme Being myself," he says. He told his parents about his intention to join the Math but they were against the idea. But within six months he had joined the Math. Later, his parents reconciled with him.

Swami Sutapananda, who is from Tamil Nadu, says, "Nobody can compel you to become a monk. It has to come from within. I joined the Math because it was my destiny."

And the monks are dedicated in their desire to serve society. "The joy I get in helping people cannot be quantified," says Swami Sutapananda. "Most people see only the physical form of human beings. But inside every person there is a God. So, when you help a person you are showing your love for God."