The news at your doorstep 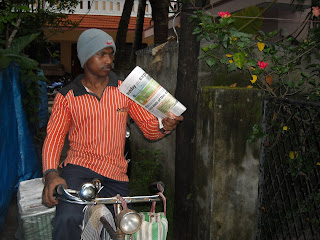 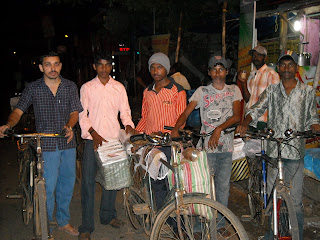 Every morning, youngsters all over Kochi race through streets and bylanes delivering newspapers. But it is during the monsoon that they go through a trying time

At 5.45 a.m. on a Sunday, A.R. Rajesh, 19, heads out from Palarivattom Junction on a cycle with a batch of newspapers folded neatly in a side box and hanging from a cloth bag from the handle.

His first stop is ‘Canopy – The Canara Bank Officers Apartments’, near the St. Martin De Porres church. As he steps into the entrance of the first block, he sees a red light blinking on a panel near the entrance of the elevator. He presses the button a few times, but the door to the lift does not open.

With a snort of impatience he rushes up the stairs to the second floor where he drops newspapers on the mat in front of a couple of doors. Then it is off to the third floor. Thereafter, he runs down, two steps at a time, and goes out to the next block. In all, 22 newspapers have been delivered.

Rajesh crosses the road and enters North Janatha Road. As he pedals at a fast clip, he leans back, picks up a newspaper and sends it soaring over the black gate of Joby P. George’s bungalow. Then he turns left to Citizen Lane.

Behind the gate of a house, an Alsatian dog barks loudly, and runs from side to side, but Rajesh, unflinchingly, goes about his job. Then he goes into Eroor Vasudev Road, on to Sabarmathy Road, on the other side of the main road, and soon Rajesh has reached the Jawaharlal Nehru stadium.

At the nearby Regal Apartments, as he places the cycle on the stand, in comes another newspaper agent, Prakashan, riding a Scooty. They exchange greetings, as Rajesh rushes inside the building.

Prakashan takes his time to pull out the copies of the Malayala Manorama, Mathrubhumi, The Hindu, and, after an agonisingly long wait of several seconds, a thick bunch of The New Indian Express newspaper.

Rajesh returns and goes towards South Janatha Road. He throws newspapers with an easy flick of his fingers. Sometimes, it is towards the first floor, but mostly it is in courtyards and porches. The newspaper falls near the wheels of cars, or on chairs placed in the verandah, and once it landed like a bookend between two leather slippers placed in front of a door.

Following Rajesh is like being in a maze. Going in and out of lanes, down narrow paths, into places where the road becomes a dead-end, turning around, heading back, suddenly turning left or right. Eventually, Rajesh reaches Thammanam Road, and delivers the last of his 110 newspapers with speed and gusto.

Rajesh has been doing this job for the past four years. For him the most difficult time is the rainy season. “I have to cover the newspapers with a plastic sheet before I set out,” he says.

Rajesh wears a raincoat, and takes an umbrella along. “When you are putting the newspaper inside the elongated tube, on the gate, if you don’t hold up an umbrella, it will get wet,” he says.

But for those customers who don’t have tubes he throws it on the porch and because of strong winds and slanting rain, the newspaper gets wet.

“Sometimes they will call the agent, Dhanesh Rao, to complain,” he says. If Dhanesh has an extra copy he will deliver it. Otherwise, he will ask them to install a tube.

During the monsoons Rajesh takes an hour and a half while in summer he is finished within an hour. Then he goes home, has his breakfast and heads off for his job as a helper in a godown of a medical shop on Thammanam Road.

But not all youngsters and especially their parents have this attitude. “Because families are small these days parents, even those who work as labourers, want their children to study, instead of going out for work,” says Dhanesh.

Another drawback is that there is a habit of sleeping late in most families. They see TV, have a late dinner and go to sleep at midnight. “Hence it is difficult for these boys to get up at 4.30 a.m.,” says Dhanesh. “But I am managing to get a few. They enjoy the job.”

When he says this, Rajesh and Manu, who sit nearby, nod and smile.