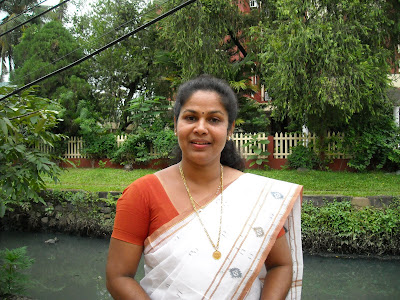 Gracy Joseph, the UDF candidate for the Kaloor South division, promises to clean up the Perandoor Canal, if she is elected

One day, Gracy Joseph entered the home of a 75-year old woman on Manattiparamabil Road. When the old lady saw Gracy, who is the UDF candidate for the Kaloor South division, she began shouting, “I will not give my vote to either the UDF or the LDF.” Soon, a crowd gathered outside. “I felt scared that the people would think we were having a quarrel,” says Gracy. But a patient Gracy was finally able to calm the woman down.

Eventually, the reason for her anger became evident. She had tenants who were not moving out or paying the rent. The case was going on in the High Court. The woman had called the political party offices to ask for help, but nobody had responded.

“There is a lot of anger among the voters,” says Grace. “Issues like choked drains and poor waste removal are upsetting them.” She says that in the many houses she visited, at one corner near the kitchen there were several plastic packets containing non-biodegradable waste.

But, of course, the big issue in the division is the waterlogging that occurs during every rainy season along the houses that line the Perandoor Canal. “Last month, water entered the homes till it reached the height of the dining table,” says Gracy. “Scorpions and cockroaches floated about.”

In her own house, Gracy has raised the level of the ground floor to such a height that she can no longer use a ceiling fan. “Instead, our family has to use a table fan,” says this mother of two sons. Her husband is working in Saudi Arabia.

Gracy says that if she wins, her priority will be to clean the canal. “It has not been cleaned for years,” she says. “The canal is filled with plastic waste and garbage.” The PVS culvert on the main road also has to be widened, so that there is a good flow of water from the canal to the other side of the road.

Gracy has been on a relentless campaign for the past two weeks: she has visited all the 1600 houses in the division. All this is new to her. Gracy has been a member of the Congress Party for only two years. “I am thankful the party seniors have given me the opportunity to stand for the councillor’s post,” she says.

Since Kaloor South is a woman’s seat, Gracy is having a contest with Neethi Raghunath of the LDF and Sharika Ajith of the BJP.

In person, Gracy comes across as intense and committed. Now the voters will have to decide whether they want to repose their faith in her.