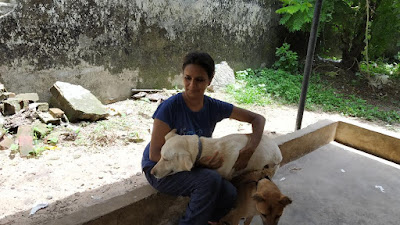 Sachithra Soman runs a shelter for dogs and cats, at Kochi, many of whom have paralytic injuries

At 11 p.m. Sachithra Soman lies down on a mattress which is placed on the floor next to a wall. Within moments, 25 cats and kittens will find different places on the bed, curl up and sleep. But there are exceptions. Honey, a one-year-old cat, always lies on Sachithra’s stomach and nibbles at her nightie. Sreekutty and Aishwarya nibble at her ears. All three cats lost their mother a few days after they were born. “They miss nibbling milk from their mother,” says Sachithra. “Honey thinks I am the mother.”

Because of the three, Sachithra sleeps straight on her back, with her hands at the side, and avoids turning to the left and right. “It’s tough,” she says, with a smile. “But I have got used to it.”

Her rented house, near Marottichuvadu Junction at Edapally, Kochi, has an area of 15 cents. It is set away from the main road, down a narrow private lane. There is a sizeable area in front of the house and at the side, there is a muddy section where Sachithra grows vegetables. Apart from cats, there are nine dogs. A few of the dogs are injured.

Muthu used to stay in front of the Tellicherry Kitchen at Kathrikadavu. At night, the employees would throw scraps of food at Muthu. One day, a car hit the dog. It became paralysed. A few local volunteers were informed. They took the dog to the hospital. The doctor suggested euthanasia. But they were reluctant. The dog received treatment for one month. A dog wheelchair was bought for Rs 7500, and a waterbed for Rs 1800. The total bill came to Rs 25,000. All of them, including Sachithra, are part of a Facebook group of animal lovers. Well-wishers paid the bill. Then Muthu was given to Sachithra. She looked after it. Today, Muthu can walk, but with a limp.

Muthu is the only male. The females have names like Bhavana, Menaka, Reshma and Bhagyani. Sachithra has a sense of humour. She calls two cats by the name of Ambani and Adani.

Sachithra came in the news recently when she began feeding dogs during the coronavirus lockdown. “I realised that many of them were starving,” she says. So, every evening, Sachithra and other volunteers fed about 150 strays in different parts of Kochi.

On the first day, the dogs stayed away and watched Sachithra place the packet. They approached it only when she moved away. “They are afraid of human beings,” she says. “But on the third day, they started jumping on me and expressed their love.”

Once again, well-wishers sponsored the cost.

At her home, Sachithra wakes up early. And she ensures she cleans up all the ablutions. Then she sweeps the house and makes the meals. Just before 10 a.m., she feeds them rice, chicken and dog food like Pedigree, Chappie, and Drools. Then she places bowls of water at different places and leaves. She works as a salesperson in a private company. This was the routine before the lockdown. When she returns at 6.30 p.m., she gives them another meal.

If she is late, all the cats will stand near the gate looking anxious and worried.

“Many people say that cats have no love or attachment,” says Sachithra. “But my experience has been different. They are very loving. But they like to be loved, too.”

As for the dogs, Sachithra shows her love by bathing them once every ten days. She uses a scrub, dog shampoo and water. But most of the dogs don’t enjoy it. “That’s because they have never had a bath like this before,” she says. “They are strays and feel scared. Muthu refuses all the time.”

Asked how she developed a love for animals, Sachithra says that her father housed many cats in their home at Kilimanoor. “When my father came across an abandoned cat, he would bring it to the house,” she says. “I felt empathy for them.”

This empathy remained dormant. Then, one day, Sachithra and her friends went to the Ernakulam Town station. They were waiting to board a train to attend the Thrissur Pooram festival. As she looked around the platform, Sachithra saw a kitten at one corner. “Nobody cared for it,” says Sachithra. “It seemed to me as if it was about to die.” So, she picked the kitten up, put it in a basket and took it to Thrissur. She was wondering how she would take care of it. But in Thrissur, her friend, the nurse Papa Henry offered to look after it.” [Papa was in the news when she offered to work in any hospital in Kerala for COVID patients.]

When she returned to Kochi Sachithra got an idea of starting an animal shelter. And she set up one. But there have been hurdles. The house at Edappally is the sixth one she has rented. Because everywhere, the locals have objected.

This is in stark contrast to Mumbai where she lived for several years and had dogs in her ground-floor apartment. All her neighbours supported her and fed the animals themselves. When she relocated to Kochi, they promised to look after the dogs.

But in this area, too, the local people have raised a protest. The residents of a five-storey building, in the next plot, have given a complaint to the Thrikkakara municipality.

At 6.30 a.m., on a Sunday, Ajitha Thankappan, the councillor of the municipality came to Sachithra’s house and told her that as a tenant, she could not run an animal shelter. Sachithra replied that according to the Indian Constitution, owners and tenants have equal rights to run an animal shelter. “I am not doing anything illegal,” she says. “The municipality has failed to look after these strays. And now, they are trying to prevent someone from taking up this responsibility.”

Ajitha says she had received several complaints from Sachithra’s neighbours. They say the barking of the dogs is constant, especially at night. “There are old people who live nearby,” says Ajitha. “They find it difficult to handle the noise. They also told me this is a residential area, and it is not the right place to have an animal shelter.”

Sachithra admits the barking of dogs does happen but not often.

Meanwhile, the municipality has sent a notice asking Sachithra to make proper arrangements to house the dogs, a possible shed, and for the removal of faeces in a scientific way.

Following Ajitha’s visit, Sachithra has also filed a police complaint. One dog named Arun died suddenly. She suspects that he had been poisoned. The wall of the neighbouring building is broken. So dogs can jump into the parking area. Maybe somebody did some mischief.

Natural deaths have also taken place. This month, a 12-year-old dog stopped eating. Sachithra took her to the hospital. The vet said that the liver and kidney had stopped functioning. So, she brought the dog back. It died four days later. A few months ago, ten kittens died when they were afflicted with panleukopenia (this is a contagious viral disease of cats).

And she has to carry them to the yard, take a spade, make a hole and bury them.

Incidentally, all the dogs and cats are up for free adoption. All you have to do is to go to the shelter, select the animal, prove that you are sincere and take the pet you want.

You have to hand it to her. This is a one-woman show. Sachithra does not have any helpers. Most maids don’t want to work with animals. “The love of my dogs and cats sustains me,” she says, with a smile.