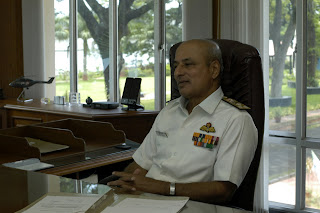 “I had a classmate, Vijay Ramteki, who belonged to a poor family,” says Vice Admiral Sunil Damle, Flag Officer Commanding-in-Chief, Southern Command. “Once I had gone to his house to play and felt thirsty.” Damle asked for a glass of water. Ramteki told his mother. But, despite waiting for a while, no water was given to him. Damle saw the pitcher in the kitchen and, pointing at it, said, “Please give me water.” Ramteki’s father said, “Can you drink our water?”

The father replied, “Our caste is different. You are a Brahmin, you cannot drink our water.” Eventually, he was given water to drink. Later, Damle was told the reason for the delay: Ramteki’s brother had gone to the house of a higher caste neighbour to get the water. When Damle returned home, he told his mother about what had happened. “She said the next time I went, I should insist on drinking water from their house,” says Damle. “I have never forgotten the incident.”
Damle grew up near a pottery factory in Nagpur, where his father was the Works Manager. In the colony, near the factory, the officers’ and the workers’ families lived together. “From an early age, I learned to mix with all types of people,” he says.

Once, there was a strike by the potters and it was led by A.B. Bardhan, now the general secretary of the Communist Party of India. “I remember his face very well,” he says. The management decided the factory would be run without the potters, and to express solidarity, the families of the employees lent a helping hand. “We children were told to carry coal,” he says. This was deposited near the railway trolley line and the children would carry the coal, on flat trays, to the kiln, a distance of 50m.

“In the evenings, my body would start aching,” says Damle. Earlier, at school, when Damle would look out through the window and see the labourers, he would think they were having a good time, while he was burdened with examinations and homework. “I realised their job was not as simple as it looked,” he says.
Damle was a good student, except in chemistry. “At that time, chemistry was taught in Marathi,” he says. “So, nitric acid was called nathramla, while oxygen was pranavayu.”

This is where the confusion began for Damle. “We were calling oxygen, pranavayu, but writing it as O2,” he says. “This seemed illogical to me.”

Despite his problems with chemistry, Damle says life had its moments of joy. His father was an English movie buff, and would take Damle for shows at the Central Talkies theatre. “I remember seeing ‘The Adventures of Robin Hood’, in which Errol Flynn played the hero, while Olivia de Havilland played Maid Miriam,” says Damle.

In the film, there was a long kissing scene between Flynn and De Havilland. “When we were returning home, I asked my father about it and he warded off the question,” he says. “At home, when I asked my mother, she said, ‘You should not talk about it.’ Then she shooed me away. This increased my curiosity.”

Later, he overheard his mother telling his father that their son should no longer be taken for English films. “My father replied, ‘Robin Hood is a story meant for children. How could I know that there would be such a passionate scene?’”

Damle laughs at this recollection. “Times have changed so much,” he says. “Children see so much on television these days.” Incidentally, the couple’s own children have grown up and live abroad: Shishir, 33, is in Australia, while Varsha, 30, stays in the US.

In the well-maintained Navy House, on Willingdon Island, Damle, 59, wearing a red T-shirt, and his wife, Alka, look relaxed, on a Saturday morning, as breakfast is served in the dining room: Uppamavu is followed by the Marathi delicacy, appe, dipped in sambhar, followed by date and walnut pancakes.

Later, he journeys into the past yet again. At the factory, visitors would come from Mumbai and Delhi. Damle would accompany his father when they had to be dropped off at Nagpur airport. ““I used to get excited by the noise of the propellers, the pilots sitting in the cockpit and the lights blinking in the night,” he says. “I would think, ‘If I could be in their shoes, how nice it would be!’ I felt that only special people could become pilots.”

Well, Damle is a special person because, years later, he did become an outstanding pilot of the Indian Navy and flew many types of aircraft, including the Sea Harrier jet fighter.