Add some spice to your life 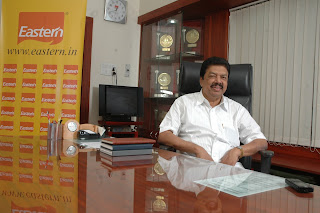 M.E. Meeran, the chairman of the Rs 400 crore Eastern Group has led the company to a position of strength. Their curry powder has been a best-seller for years

For several years M.E. Meeran had run a wholesale provisions shop in his native town of Nellimattom, near Kothamangalam. Then he wanted to expand his business.

A suggestion by an Adimali-based brother-in-law made him go to the town. He liked the place, and rented a room. Wondering what to call his shop, he realised that he had traveled from the west to the east. So he decided to call it the Eastern Trading Company.

Among the many things Meeran sold, the one in regular demand was chilly powder. As the demand grew, he decided to start a factory in Adimali in 1984. It began to do well from the very beginning. A few years later, Meeran took on the distributorship of well-known companies like Kerala Soaps, Mysore Lamps, and Brittannia Industries Limited.

One day he attended a workshop conducted by Brittannia at Ooty. One of the instructors said that in order to be successful, companies should avoid the whims and fancies of wholesalers and deliver the products directly to the retailers.

“I took the message deep to my heart,” says Meeran. Thereafter, he began to hire vehicles for transportation. “Today, the Eastern Group sells goods directly to 40,000 retailers all over Kerala,” says Meeran, the chairman of the Rs 400 crore company.

They also export products to Europe, and several countries in the Middle East. “Our biggest market is in the United Arab Emirates,” says Meeran, in his tastefully-decorated corporate office in Edapally, near the Oberon Mall. Each month the firm sends 20 containers there.

“Ninety percent of our customers in the UAE are Malayalis, but Arabs also like chicken and turmeric powder,” says Meeran. The other popular products include chilly powder, coriander, turmeric, and Kashmiri chilli.

Recently, the firm bought a state-of-the-art chilly grinding mill from Germany. “Earlier, we would produce 100 kgs an hour,” says Meeran. “Now it is 1100 kgs an hour. A friend told me recently, ‘Thanks to the new machines curry powder is gushing out like a waterfall at the factories.’”

The company has factories in Adimali and Theni in Tamil Nadu. Two more are coming up in Guntur (Andhra Pradesh) and Kothamangalam (Kerala).

The Eastern Group has a staff strength of 2500. But among its factory workers, there are many from West Bengal and Orissa. “We had to hire from outside, because there are a lot of opportunities for the local people now,” says Meeran. There are 300 autorickshaw drivers in Adimali town itself. People work in textile shops, hotels, and in tourism. “Nowadays, you can step out of one job and get another one easily,” says Meeran.

The lack of local people is not a hindrance. The company’s daily production is 110 tons, but the group is now targeting places like New Delhi, Mumbai, and other cities for growth. “There is an untapped market for our products all over India,” says Meeran. “We are aiming for a daily production of 300 tons.”

Today, the group is far ahead of the competitors. And Meeran analyses the reasons for this. “We have always produced high-quality products,” he says. “Thereafter, one should never overcharge. The products should be easily available to customers. If I say, ‘I have made a good curry powder in Adimali, the people of Ernakulam will not come there to buy it.’”

The products should be packed attractively and there should be continuous advertisements in the print and visual media. “If a customer wants to buy curry powder, the name ‘Eastern’ should come to his mind immediately,” says Meeran.

Apart from all this, the most important aspect is planning. “Without planning, all the other attributes are useless,” says Meeran.

He says that the company buys the raw materials during the months of January to March. “We are always looking to get the best price,” says Meeran. So, well in advance, company officials will scour the world for the best deals. “We have bought curry powder from Russia, Indonesia, and Vietnam.” This year, since the international prices were high, they have purchased locally.

But the group insists on buying the very best. So the R&D department, with its fully-automated lab, will check all purchases for traces of salmonella, pathogens, bacteria, and toxins. “If I want to export to Europe, I have to produce curry powder of the best quality,” says Meeran.

Thanks to this insistence on quality, the Eastern Group has won the ‘Best Export Award’ by the Spices Board for 12 years in a row. And even though Meeran is 69, and his son Nawaz is helping him, the fire continues to burn brightly within him.