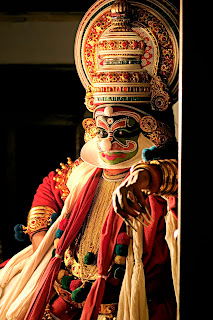 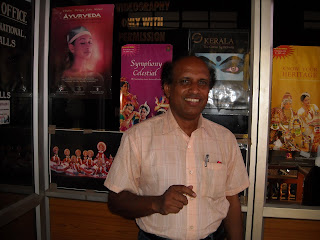 Kalamandalam John is the first Christian to become a master Kathakali dancer. But he had to overcome entrenched discrimination to achieve excellence in his art

In 1971, after finishing his Class Ten exams, Kalamandalam John was pondering over what to do with his life. In school he had acted in many plays and participated in sports activities. Around this time, he attended a Kathakali concert at Ettumanoor for the first time. “I became very excited by the performance,” he says. Soon, a desire arose in him to learn Kathakali.

When he hesitantly told his father, a farmer, John received words of encouragement. So he applied to the Kerala Kalamandalam, at Cheruthuruthy in Thrissur district, and was selected.

But the regimen came as a shock to John. Every day he had to get up at 4 a.m. “My body was covered with oil and I had to jump up and down 100 times,” he says. “If we did not jump properly the teacher would hit us with a cane on the soles.”

This went on for three weeks: the massages, classes, and practical lessons. “It was overwhelming,” he says. “I could not handle it.” So John asked for a fortnight’s break, went back home, to Edayar village in Kootthatukulam, to tell his parents that he did not want to learn Kathakali. “My relatives made fun of me for giving up,” he says. “They said, ‘We told you not to go, but you were so obstinate.’”

John felt humiliated and angry. With renewed determination he returned once again to the Kalamandalam.

This time he remained. On February 14, 1973, he had his arengattam (debut performance) at Kalamandalam. And following that, for the first time, John’s religion began to hamper him. As a Christian he could not perform in temples.

So John would remain alone in the hostel, while his fellow students and elders went to take part in temple performances. When they returned, they would talk excitedly about their experiences.

“I would feel so bad,” he says. “There were many nights when I have cried myself to sleep. This happened right through my years of training.”

On rare occasions when the performance was held at a club or outside the temple he was allowed to take part. But there was further humiliation in store.

During dinner, while the others went inside the temple to eat, John would be served outside. “I was deeply upset,” he says.

But John was a brilliant dancer. He got the first rank through all the six years of training. In 1997, John received the A.D. Bolland Gold Medal for being the best Kathakali student at the Kalamandalam. But the award was usually given at a public meeting where prominent personalities are invited.

But John did not receive the same privilege. Instead, he was told to collect the certificate from the Kalamandalam office. “I don’t know why this was done,” he says. “I am, probably, the only person to receive my medal like this. It was an act of discrimination, although I don’t know whether it was done deliberately or accidentally.”

The next year John was awarded a Government of India scholarship, which was worth Rs 2000 a month. However, to get the scholarship, a consent letter had to be sent to Delhi from Kalamandalam. But for one month, despite several efforts, John could not get the permission. He was running out of time.

In desperation, through an uncle, John got in touch with the late Kochi-based M.K.K. Nair, a former chairman of the Kalamandalam.

Nair spoke to the superintendent, Vasudevan Namboodiripad. Three decades later, sitting in the lobby of the Cochin Cultural Centre, John still remembers the words of Nair verbatim: “This is MKK Nair speaking. John has got a scholarship. I am sending him to you. Please issue him the consent letter.”

When John went to the Kalamandalam the next day, he received the letter. The scholarship was for two years, but because he performed so well, it was extended by one more year.

Following the conclusion of the course, John was appointed as a part-time teacher at the Kalamandalam, for a monthly salary of Rs 350. During this time there were posts for teachers available, and John would dutifully go for the interviews. And each time he would be told that he would get his chance at the next opportunity.

“It reached a stage where one of my own students appeared for the interview at the same time as me,” says John. And when the student got the job, John was devastated.

He says that some of his colleagues at the Kalamandalam were against him, solely because he is a Christian. “I am the first Christian to learn Kathakali,” he says. Later, other Christians joined, but they were very few in number, and did not advance.

Then there was Haider Ali, the first Muslim to learn Kathakali, who was very talented and made a mark (see box). “But none of the Muslim and Christian students have become full-fledged teachers,” says John.

Meanwhile, among the many teachers he had, John is deeply grateful to Kalamandalam Padmanabhan Nair. “He was a big supporter, but most of the time he seemed unable to fight the bias,” says John.

This antipathy extended to his personal life. When John got married to Mary on January 6, 1985, at Edayar, not a single invitee from the Kalamandalam came for the function. “My relatives asked me why nobody had come,” says John. “I did not know what to reply.”

In 1988, John finally quit the Kalamandalam, and started his own Kathakali school, ‘Kalatharangini’, a few hundred metres away from his alma mater. Initially, he bought a small building on a small patch of land. Slowly, John began getting students from Europe and America. He also traveled abroad extensively and staged performances. His favourite characters include Duryodhanan, Keechikan, Ravana and Bhima.

Now the dance centre at Cheruthuruthy has expanded to half an acre. Apart from Kathakali, classes in Bharat Natyam, Mohiniyattom and Kuchipudi are also taught.

Mary is conducting these classes. John taught her to dance, years ago, and now she is an accomplished Kuchipudi and Mohiniyattom dancer. Their two daughters, Ruby and Riya, have followed in their parents’ footsteps. And John is a happy man, at the age of 55.

“I have no regrets about becoming a dancer,” he says. “In fact, I became a good dancer, because of the many struggles I faced. Thanks to Kathakali, I have my own school, am financially comfortable, have traveled all over the world and have a beautiful family. What more can anybody ask?”

Haider Ali was only 11 when he joined the Kerala Kalamandalam. Since he came from a poor family, he needed the help of benefactors to pay the fees. At the institution, Kalamandalam Neelakantan Nambisan, Sivaraman Nair, and Kalamandalam Gangadharan gave him training in the vocal music of Kathakali.

His turning point came when M.K.K Nair, the then chairman of The Fertilisers and Chemicals, Travancore Limited, gave him a job in the company’s Kathakali school in Ambalamedu, near Kochi.

Because Hyder Ali was familiar with Carnatic music thanks to his training under N.K. Vasudeva Panickar at the Kalamandalam, this enabled him to develop a unique style of his own in Kathakali music. Hyder Ali effectively used the ragas to the Kathakali padams which enamoured the listeners.

Because of this innovation, there are people who only listen to songs, without the accompaniment of the dance. This was Haider Ali’s lasting innovation.

Since he was a Muslim he was unable to perform in temples, especially in north Kerala. But there was a famous incident when the administrators of a temple in Chengannur broke down a wall, so that Haider Ali could sing for the performers inside the compound.

Like Kalamandalam John, Haider Ali mentioned in his autobiography that he suffered from discrimination because of his religion.