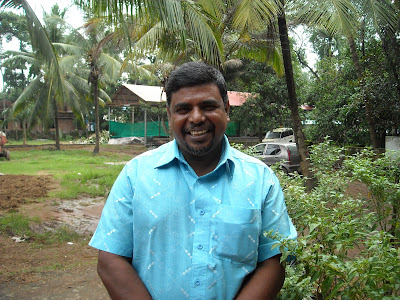 E.V. Jose started drinking when he was 14 years old. His style was simple: he would drink till he became unconscious. The years went past. He graduated from toddy to brandy, to whisky, to rum. His wife took him to numerous hospitals and nursing homes in a bid to get him cured. But to no avail. They fought often. Heated words were exchanged.

One day, her patience snapped. She walked out of the house with their son. Later, she filed for divorce. The boy stayed with the mother. Soon, she re-married. Through it all, Jose continued drinking.

“I would drink two bottles a day,” says Jose. He usually began in the morning itself. When Jose got drunk, he would get violent and get into brawls with people, usually at bars.

During this time Jose tried his hand at some businesses, but they all failed. His mother died, and his despairing father went to live with his brothers. Jose's two sisters were married off. So, Jose remained alone in his house at Kalamaserry and kept drinking.

“I would wear the same shirt for days together,” he says. “I rarely had a bath. There was no electricity in the house because I had not paid the bills. So, I could not switch on the water pump. There was nobody to wash my clothes. I began to let off a bad smell. Neighbours and relatives stayed away from me.”

To get money for drinking, he sold the furniture, bed, fuses, bulbs, tiles and window frames. It was at this low point that a neighbour, Devassey, told him to attend a one-week retreat at the Thampallakadu ashram. This is run by the Emmanuel Love Community, which belonged to the Catholic archdiocese of Kanjirapally.

“I agreed to go because I would be guaranteed meals for a week,” he says. Jose went to meet the state coordinator at Vazhakala. It turned out to be Varghese Kandathil, a former classmate of his, and a recovering alcoholic.

Later, Jose went for the seven-day retreat. It was a programme of lectures, testimonials and prayers. And it changed his life. When Jose told the director, Fr. Sebastian Vechookarottu, that since he would be going back to the old environment, how could he become a new person? “Believe in God, and He will be there for you,” said the priest. So, every morning, Jose lights a candle, and kneels in front of an image of Jesus Christ, and prays, “God, please keep me away from alcohol for 24 hours.”

Five and a half years have gone past. Throughout this period, Jose has abstained from alcohol. He has a flourishing business and owns property. But he has no plans to get married again. Instead, he is trying to reconnect with his 14-year-old son. “But this is what I have learned from my life,” he says. “Once an alcoholic, always an alcoholic. You have to fight your urge to drink every single day, to prevent a relapse.”

K.V. Ashokan, 54, began drinking from the age of 20. But he was always in control. “I never lost my temper or behaved badly in public,” he says. But at home there were frequent quarrels with his wife. The three sons were silent observers. A few years ago, he took voluntary retirement from a private company. Feeling bored, his drinking increased. Desperate, his wife took him to the Emmanuel Love Community. Ashokan's cousin, an alcoholic, had been cured by going there. So, Ashokan attended the retreat in December, 2008.

Interestingly, he did not find it irksome that it was a Christian set-up. “I am a believer in Shree Narayana Guru, who said that we should respect all religions and creeds,” he says. Two and a half years have passed and he also has also kept away from alcohol. “But it has been a struggle,” says Ashokan.

In June, 2009, he had gone with the dead body of his uncle to the crematorium. As they waited, some relatives started drinking in a car. Ashokan begged for a peg, but his friend, Parameshswaran, said, “No, no more. You have stopped.” At that moment Ashokan became very angry with Parameshwaran, but now he is grateful to his friend for showing firmness.

There are many stories like this. “Out of 100 people who attend, 35 will go back to drinking,” says Varghese. “Drinking alcohol has become a fashion at all social events. Those who don’t serve drinks are treated like outcastes. However, very few people realize how addictive drinking can be. Today, unfortunately, too many families have been destroyed, because of alcoholism.”