Dealing with a dreaded disease 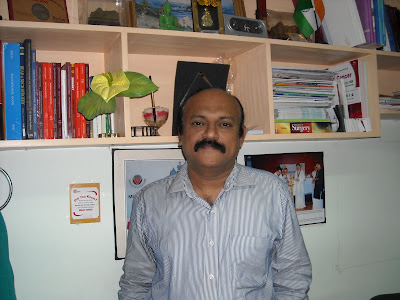 Dr. Thomas Varughese of Lakeshore hospital deals with cancer victims every day. He talks about the impact of the disease and the precautions that need to be taken

One morning, seven years ago, Rahul George (name changed), 48, was brought to the Lakeshore hospital at Kochi by relatives. Bizarrely, he was carrying a letter from a hospital in Thiruvananthapuram stating that he was suffering from lung cancer and had a week to live. Hence, he was being released.

“Rahul's chest was full of blood,” says Dr. Thomas Varughese, the senior consultant oncologist surgeon. Immediately, a surgery, lasting several hours, was done. One half of the lung was removed. After rest and recuperation Rahul returned to Alleppey where he has just retired as a physiotherapist in a government college. “This is one of my most memorable cases,” says Thomas. “I saved a man from the brink of death.”

Unfortunately, the incidence of cancer is rising alarmingly these days. “Earlier, those who had cancer would be in their fifties or sixties,” says Thomas. “Now, people in their twenties and thirties are afflicted.” For women, the most common is breast, followed by lung cancer. For men, it is lung and head and neck cancer.

One of the major causes is the type of food we are eating. “Milk products are very risky,” he says. “It contains an insulin like growth factor, which is a stimulant of cancer. Milk is a carcinogenic product” (Carcinogenic means anything which can initiate a cancer process within the body).

As for meat, the red content is called haem. “Haem is a carcinogenic,” says Thomas. “When haem is within the meat, it is fine. That is why meat-eating animals don't get cancer. But when meat is cooked, haem gets out. It enters the intestine and causes damage. Cooked meat also contains plenty of nitrous amines. These are also carcinogens, with easy access to the intestine and the bloodstream.”

A meat-heavy diet is one reason why in Europe and the USA, the incidence of colon cancer is very high. Too much oily food is also unhealthy, because it contains saturated fats, which are carcinogenic. Thomas suggests a rich vegetable diet, with a lot of bran. “Bran contains omega 3 fatty acid, which protects against heart attacks and cancer,” he says. “Bran is a soluble fibre. We need fibre in our food, because it acts as a scavenger. It takes away all the waste material from the body.”

Apart from faulty diets, the environment can have an impact. A constant exposure to sunlight can produce skin cancer. In a particular village near Haripad, at least one member of the family has got cancer. “This is because of the radiation from the sand,” says Thomas.

Other reasons for the increased rate of cancer are the widespread habits of drinking alcohol and smoking.

Thomas suggests two precautions: the right diet, and regular exercise. “Exercise burns calories,” says Thomas. “Along with that, protective hormones get activated. These are anabolic hormones, which protect the body.”

During an operating day, Thomas ends up doing all kinds of surgeries: head and neck, throat, breast and abdominal surgeries. In a video that he shows on his computer, he cuts with practiced ease.

“The most difficult part is to inform the patients that they have cancer,” says Thomas. “Whatever way you say it, with a smile, or in a light-hearted manner, the word has the impact of a bombshell.”

The surgeon tries to talk in a calm manner. “I will never get angry with my patients even if they are upset or angry with me,” says Thomas, who is forceful by nature. “The important thing is to inculcate a fighting spirit within them.”

Thanks to recent advances, if a cancer is detected early, there is a strong possibility of a cure. “The PET (Positron Emission Tomography) scan is a wonderful new addition,” says Thomas. A PET scan will show whether the disease is localised or spread all over the body and is far more effective than a CT scan.

Thomas, who has done advanced training in Memorial Sloan Kettering Centre in New York, MD Anderson Cancer Hospital in Texas, John Hopkins University in Baltimore, apart from hospitals in Japan and Australia, has done about 3000 surgeries in the past 24 years. Today, he is optimistic about a cure for cancer. “As the technology improves, especially in diagnosis, radiation and surgery, I am sure there will come a day when people will no longer feel terrified when they are told they have cancer,” he says.