The School of Hard Knocks 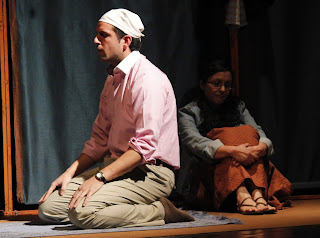 The play, 'Hard Places', focuses on the border that divides communities and the conflicts within families

The first sight of the stage at the JT Pac, Kochi, brings a surprise. At one side, the floor is littered with garbage: paint buckets, wires, plastic packets, cardboard boxes, a white plastic lunch tray, and wires hanging from the ceiling. On the other other side there is a wooden partition that seems to indicate a hotel room with a door and window.


Actor Rajit Kapur, in the introduction, says, “Though the play [Hard Places] is not political in nature, or specifically located anywhere, the genesis lies in an extraordinary place called the Shouting Valley in the occupied Golan Heights. Cutting across the Valley is a border imposed by Israel, which abruptly cut apart families and separated them forever” (see box).
In walks Aziz (played by Nabil Stuart), pulling a suitcase, and Saira (Shernaz Patel) with a satchel. They have come to rescue their mother (Jasmina Daniel).

There are a lot of conversations between brother and sister about their early life with their parents, the problems and conflicts. Sometimes, when things get heated up, and what is more inflammatory than a bruised childhood feeling, expletives are used. Occasionally, an unforgettable line comes up, like this one by Saira: “In wars everybody gets screwed except the ones doing the screwing up.”

Later, there are exchanges with the mother, shouting across the border, through megaphones, about relatives, boyfriends, careers and life. And at the climax, mother and daughter walk towards each other, in no-man's land, and, not unexpectedly, they are shot dead by the guards. At this point, a part of the garbage is lifted up on a wire. And Saira, near the end of the play, places her face in a bucket of water for an inordinately long time. This, clearly, was a play for cerebral minds. But for most people, they, probably, could not understand the symbolism of Saira's act.

'Hard Places' is a hard play. It is not easy to figure out the meaning. The dialogues are intense and serious, with very few laughs in between. This is a collaboration between Rage Foundation (India), Tinderbox and Mercury Theatre Company (UK). But the Kochi audience had a mixed reaction to it. Says businessman Sooraj Menon, “I did not understand most of it, since it was quite intellectual. But I am sure there was a section that enjoyed it.”

Says Dr. K. Anand: “Unlike the usual plays seen at the JT Pac, which is mostly comedy, this play was a bit dark, with unnecessary profanities. Some of the dialogues were over the top, and high-brow. The ending was abrupt, and, given the hype, the play was a bit of a let down.”

The Six Day War in 1967 pitted Israel against Egypt, Jordan, and Syria. During the conflict, Israel annexed a part of the Golan Heights in Syria. In this area is the Shouting Hill. It is situated near the Druze village of Majdal Shams. As a result, the Druze community members have been separated. Visits are allowed rarely between the families on both sides of the ceasefire line. Since there is no telecommunications or mail, families come to the border and speak to their relatives by shouting through megaphones.