When art and youth intersect 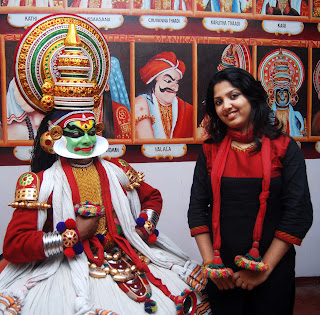 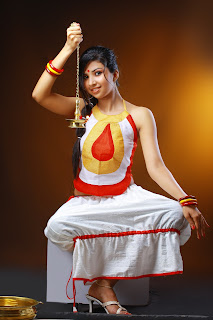 For her final-year presentation, during the Bachelor of Fashion Technology course at St. Teresa’s College, Kochi, Chanchal Sethu Parvathy was thinking of what to present. She knew what she did not want. “In Kerala when we say fashion it means Western-style dresses,” says Chanchal. “But when a foreigner thinks of Kerala, he talks about how great the art and culture is.”

Chanchal wanted to do something in the Indian tradition. Luckily for her, she did not have to look far, for inspiration. Her father, P.K. Sunil Nath, a film-maker, had done a 25-minute documentary called ‘Paccha’ on the life and career of Kathakali dancer Kalamandalam Balasubramaniam. As she viewed the documentary, she decided to do something based on the classical dance of Kerala. “In Kathakali the costumes are elaborate,” she says. “So, there are a lot of opportunities to adopt different aspects.”

In her collection, she has taken the five clothes or veshams – Kari, Minnuku, Thadi, Kathi and Pachha.

Noble male protagonists like Lord Rama and divine beings have Paccha (green) faces, but wear red and white costumes, except for Lord Krishna, who has a dress of navy blue, yellow and golden combination. “In four veshams, except kari, what is common are the colours of red and white,” says Chanchal. Her Paccha vesham style is inspired by the curtain which is held up during the drama called the thiraseela. The colours, which are used like a patch on the blouse, are, indeed, of blue, gold and yellow.  To replicate layering, which is there in most Kathakali costumes, Chanchal has attached two frill-like patterns over a knee length paavada (long skirt). “Although Paccha is worn by male characters, I have transposed it to a female,” says Chanchal.

Incidentally, in Kathakali white is regarded as a sign of purity. This colour is present in all costumes, except for the kari (black) version. In the minukku (prettying up) version, there is a long white skirt, reaching below the knees, and it is crunched up at the bottom, in a red lining, and held together with a tassel. “The skirt is long, because I wanted to avoid making sexy costumes,” says Chanchal. “The top which has gold, red and white cloth patches looks like the back of a kireedam (crown) which is used in Kathakali. This dress was worn by Sita and Draupadi, and many others, and resembles purity.”

From there, it is a straight black formation: Kari vesham. “This is worn by negative women characters like Poothana (a demoness who tried to kill Lord Krishna when he was a baby, by feeding him with a poisoned breast). Not surprisingly, in Chanchal’s version, the single-piece strapless dress is in all-black, with red linings at the bottom. But she has added a red scarf to create a sense of stylishness. “In fact, in Kathakali also, they have this red scarf as a prop,” she says.

Meanwhile, the veshams continue. Kathi (knife) vesham signifies villainous characters like Ravana. Again, a male costume has been designed for women. So Chanchal has made a white frock with red lining, while the top has sleeves falling a little short of the wrists. “In Kathakali all the costumes have full sleeves,” says Chanchal. “I put three bands of red lining to indicate the anger of Ravana.” In the dance, it is only in the make-up that Ravana looks threatening.

Noted film actress and designer Urmila Unni says that this is probably the first time in Kerala that somebody has come up with a collection based on an ancient dance form like that of Kathakali. “Chanchal's collection is innovative and creative,” she says. “She has a beautiful colour sense. I am much impressed by it.”

Meanwhile, designer and stylist Dhanya Balakrishnan, who was Chanchal's teacher at St. Teresa's, says, “When Chanchal first approached me and said that she wanted to do a collection based on Kathakali costumes I was apprehensive because it is not an easy thing to do. But I admired the way she met and interacted with several artistes, and did a lot of research. And step by step, she built up the collection. In the end, it is a remarkable work. Chanchal is blessed with talent. She has a bright future in front of her.”