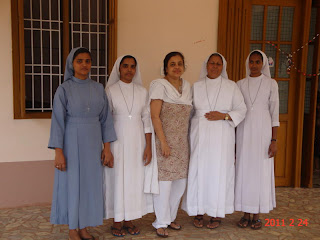 The Mehac Foundation has tied up with institutions like Sneha Bhavan in Kalavoor, and panchayats to help those suffering from severe mental illness

Photo:  Dr Chitra Venkateswaran (centre), the clinical director of the Mehac Foundation with the nuns of Sneha Bhavan


At the Sneha Bhavan in Kalavoor, in Alleppey district, the only sound is of sparrows chirping interrupted now and then by the occasional cawing of a crow. The world seems at peace but inside, in a room, an inmate is banging her head against a door. “She is suffering from schizophrenia,” says Sr. Mary Caroline, the Mother in Charge. The Bhavan is a house for mentally ill women. “There are 29 inmates,” says Sr. Mary. They range in age from 20 to 85.


Asked why the home was established in 2010, Sr. Caroline says, “We wanted to do something for people who are rejected by society because of their mental illness.”


The majority of the inmates come from poor families. “They suffer from schizophrenia and bi-polar mood disorders,” says Dr Chitra Venkateswaran, the clinical director of Mehac (Mental Health Care and Research) Foundation, which has a tie-up with Sneha Bhavan.


One effect of a severe mental illness is that the patients lose their zest for life. “Many of them just don't want to do anything,” says Sr. Caroline. “They eat and sleep all the time. Some live in the past and suffer from hallucinations. Sometimes, they become violent and throw things at us.”


It is then that the sisters place the woman in a room and lock the door. “When an inmate becomes uncontrollable, we will call Dr Chitra on the phone and she will suggest the appropriate medication. That brings relief to the patient.”


Asked for the reasons for their mental illness, Sr. Caroline says, “Sometimes, it is the family environment. Or it could be because of hereditary reasons. Some women have had fits in their childhood which has damaged their brains. There are some who are the victims of sexual abuse. There was one girl who went to work in a house as a servant and the master exploited her. And she became mentally disturbed.”


But there have been some good incidents. When Dr. Chitra saw Rajan Varghese (name changed) at a home in Mararikulam, he was chained. There was a metal bucket in the room which was used for morning ablutions. Rajan was suffering from a severe psychosis and was being looked after by his brother and wife, who was herself suffering from a bi-polar disorder. Rajan’s family had abandoned him.

“One reason he was chained was because he would run outside and throw himself into a nearby pond,” says Dr. Chitra. Rajan’s brother, Peter, was a fisherman, who left for work early in the morning and came back late. “When I met him for the first time, he was talking nonsense,” says Dr. Chitra. “With the help of some volunteers, I decided to do away with the chain.” Then the medications began. Soon, the symptoms began to lessen. Later, Rajan was shifted to Maria Sadan, in Alleppey, which is a home for the mentally disturbed.

“He stayed there for five months and his symptoms went down to a great extent,” says Dr. Chitra. In April, 2012, he returned to live with his brother once again. They don’t chain him any more. “He has not yet returned to a normal thought process but has learnt to have a shave and a bath on his own,” says Dr. Chitra. “Nowadays, when I meet him, he offers me tea. So, this is an example of medicines helping to improve a person’s mind.”


Like Rajan, to enable a similar assimilation back to society, the inmates at Sneha Bhavan are taught skills like making coir ropes. “Some of them also make the host, which is used in the Holy Communion at mass in the churches,” says Sr. Caroline.

In order to help the vulnerable sections of society, the Mehac Foundation was set up in December, 2008 (see box). Unfortunately, the stigma of mental illness runs deep in Indian society. “In one village, there were a couple of members in one family who were suffering from mental illness,” says Dr. Chitra. “Unfortunately, the other families ostracised them and the family was left to fend on its own.”

Even among the affluent classes, there is a trauma of being isolated.  “I know of families who refuse to treat their relatives who are ill because of the fear that society will come to know,” says Dr. Chitra. “As a result, the illness becomes even more severe.”


In Kerala, about 25 per cent of the population suffers from diseases like anxiety, depression, schizophrenia and bi-polar disorders. “It is important that the people understand that mental illness is like any other disease,” says Dr. Chitra. “A person can be cured if the right medication and advice can be given at the right time.”

The primary motivation of setting up Mehac (Mental Health Care and Research) was because of the pitiable state of mental health care in the country. The World Heath Organisation has pointed out that 7 per cent of Indians suffer from mental diseases.


Mehac has projects in Ernakulam, Alleppey, Kannur and Palakkad. “We have a clinic running in Muhamma panchayat where the panchayat takes an active role,” says Dr. Chitra Venkateswaran, the clinical director. “It is like a government-run programme where the panchayat gives the money for medications and we do home care visits using their vehicle.”


Mehac has also associated itself with organizations like Sir Dhorabji Desai Tata Trust, the Sree Vivekananda Foundation and the Sanjeevani Pain and Palliative Care Society.


Some of the eminent people associated with Mehac include author MT Vasudevan Nair, cartoonist EP Unny, MK Das, Former Resident Editor of the New Indian Express and Ashok Kumar (a pioneer of the palliative care movement in Kerala).

My Mother and I 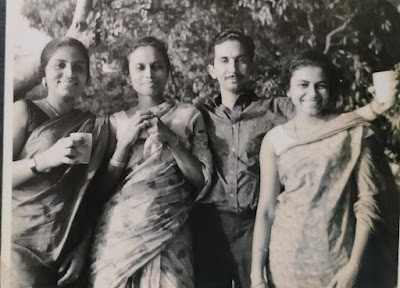