The Many Hues Of Motherhood 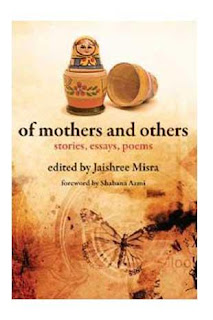 'Of Mothers and Others' is a collection of stories, essays, and poems


On December 7, 1992, one day after the Babri Masjid was demolished, New-Delhi based journalist Humra Quraishi told her children Sarah and Mustafa that they would have to stay at home, for their safety. After a while, the bell rang. When Humra opened the door, it was her children's school friend, Radhika Subberwal, who had come to spend the day.

“Her mother had made it a point to drop her at our place on this crucial and tense day,” writes Humra. “Although she was well aware that it was a Muslim home and so could have been attacked in the aftermath of the demolition and the rioting.”

And this act by a Hindu mother left a big impact on Humra. “I can't describe what great hope her gesture held out,” says Humra. “It is because of people like the Subberwals that the fabric of our country is still intact. Yes, there is hope that human beings will not be further divided and they will see through divisive political games and the havoc they unleash.”

In her moving essay, 'The State Can't Snatch Away Our Children', Humra also talks about the plight of Kashmiri mothers whose sons have been missing for years. In 1990, Parveena Ahangar's son, Javed, was snatched by the security forces. Many mothers went through similar appearances. In response, Parveena set up The Association of Parents of Disappeared Persons, one of the longest, ongoing non-violent movement in the state. Incidentally, Parveena is still searching for her son.

This write-up is part of the collection. 'Of Mothers and others', which is ably edited by best-selling novelist Jaishree Misra, and consists of essays, stories and poems, about the good, happy, and traumatic experiences of motherhood.

In Smriti Lamech's work, 'Determination', she talks about her intense desire to have a girl, because her mother and grandmother were such strong women. And when it turned out to be a son, Smriti writes, “I wish I could say I put him to my breast and fell in love but I didn't.”

Days went past with this indifference on the part of Smriti. And then one day, when she awoke, she reached out for her son instinctively. “I held him with the early rays of the sun streaming in, and the emotion hit me with the force of a ten-tonne truck,” she says. “My son. My precious, precious baby.”

Unfortunately, award-winning author Manju Kapur lost her precious daughter, Amba, when she was only 21 years old. “I remember a frantic burning itch unfurling beneath my skin,” says Manju. “For weeks, no salve, no ointment, no ice, no heat made any difference.” And she writes of how she tried to cope with the tragedy, by going for a ten-day retreat to do Vipassana meditation, at Dehradun, and searching for peace and inner healing at the Aurobindo Ashram in Pondicherry.

Noted publisher Urvashi Butalia's essay, 'Childless Naturally', is about how she deliberately stayed single and childless in a society where being barren is worse than being a widow. Writer Jahnavi Barua, on the other hand, writes about her experience of being pregnant for the first time in 'On The Other Side'.

“Motherhood changes all of us,” says Jahnavi. “Timid, tentative girls are transformed into assertive fierce women when they assume this new role.”

There are poems by Meena Alexander and Tishani Doshi, fiction by Mridula Koshy, Kishwar Desai, Shinie Antony, and Sarita Mandanna, whose striking tale, 'The Gardener's Daughter', reveals how a woman, of a prominent family, who, through intermediaries, kills off a servant's daughter, made pregnant by her son, so that he could have a political career.

An unusual essay is of mothers in Bollywood films by Jai Arjun Singh as well as one about surrogate motherhood by Sarojini N and Vrindah Marwah. And who can forget Shalini Sinha's touching 'Amma and her Beta', a story about living with a son who has Down's Syndrome.

'Of mothers and Others' is an engaging and perceptive collection. For men, it gives an insight about the women's psyche and, for females, many of the experiences will ring true.