Capturing Kathakali in all its Glory 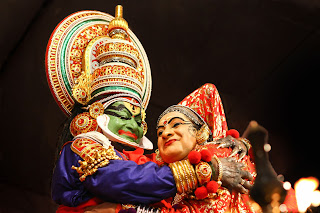 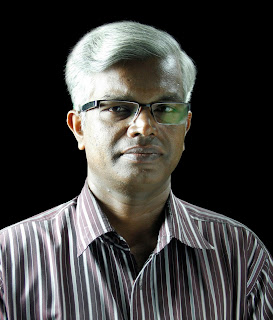 A. Somakumaran, a policeman in Fort Kochi, has spent the past four years photographing Kathakali artists

Photos: Kalamandalam Gopi playing Nala and Margi Vijaykumar (Damayanti) in the drama, ‘Nalacharitham’ (‘The Story of Nala’); A Somakumaram

Rajeev Soman, 40, an advertising professional, is going past the Durbar Hall grounds when he decides to check out the Lalithakala Akademi art gallery. On the first floor, there is a photography exhibition called, ‘The Kathakali and The Unknown Scenes’ by A. Somakumaran. Apart from scenes like a sunset on a river, a man who is body-painted in the form of a tiger, and dewdrops on a purple flower, the dominant and eye-catching photographs are those of Kathakali artists.

So, there is a fearsome photo of Kottakkal Devadas playing Bhadrakali in the play, ‘Dakshayaagam’. His jutting-out eyes are bloodshot, there are two fangs sticking out, the face is green, and he emanates menace. Then there is a beautifully taken portrait of a smiling Kalamandalam Sreekumar with all the head gear and the colourful costume of a Kathakali artist performing a move. Another striking portrait is a loving scene between Padma Shri Kalamandalam Gopi playing Nala and Margi Vijaykumar (Damayanti) in the drama, ‘Nalacharitham’ (‘The Story of Nala’), written by playwright Unnayi Warrier.

As Rajeev wanders about, relishing the various images, he asks a gallery staff member about the identity of the photographer and is told that he is a policeman.

“A policeman,” says Rajeev, looking incredulous. “How could that be?” Rajeev’s reaction is an indication of the poor image of the police in society. “They are least respected, socially ostracised, and side with the rich, powerful, and criminal elements of society,” he says.

But when he sees Somakumaran, a mild mannered, silver-haired man in his fifties, he is disarmed. “I am happy to know that there are policemen who are pursuing the finer things of life,” says Rajeev. Says former Kochi City Police Commissioner and the present Inspector General of Police (Homicide), MR Ajith Kumar, “There are many policemen like Somakumaran who have an interest in the arts. But due to work pressures, they are unable to develop their talents.”

Somakumaran has been a policeman for the past 28 years and is now posted at  the Coastal Police Station of Fort Kochi. He had been interested in Kathakali from his childhood in Idukki. “I would go to various temples to watch the programmes,” he says. During this time Somakumaran got interested in photography. The first camera he used was the Agfa Click 3 camera. Thereafter, it was the Minolta, Olympus and a Yashica SLR. But today, Somakumaran is using a Canon EOS 7D.

Around four years ago, Somakumaran began taking photographs of Kathakali artists. Usually, a programme starts at 10 p.m., so he was able to go after his duty hours to attend it. “Kathakali is one of Kerala’s greatest art forms,” he says. “When you attend a show, you experience joy, pleasure and satisfaction.”

“On and off stage, there is a marked difference,” says Somakumaran. “On stage, these artistes look magnificent and are capable of so many expressions. But off stage, when the make-up is removed, they are down-to-earth people. Vasudevan Namboodiri, in the role of Veerubhadran, looks terrifying with his various facial expressions. In fact, I shook with fear at the ferocity of his moods that I was unable to take photographs. But when I met him after the programme, he came across as a simple, genuine and humble person.”

And, of course, all of the artistes are amazed when Somakumaran introduces himself as a policeman. “Most of them say they have never met a policeman who is interested in the arts,” he says. In fact, Vasudevan Namboodiri said, “Oh, a policeman at a Kathakali play. That is unusual.”

At the exhibition, Somakumaran received a lot of kudos. Renjini Suresh, a Kathakali artist herself and the former chairperson of the Tripunithura municipal corporation immediately called Kottakkal Devadas from the gallery and told him the photo of him was good. “Many lovers of Kathakali came and expressed their appreciation,” says Somakumaran.

Meanwhile, Somakumaran is honest enough to say that Kathakali is declining in popularity. “In Ernakulam, and the surrounding areas, there will be about 100 people when a concert begins,” says Somakumaran. “However, at the end, there will be 25 people present. I guess, nowadays, people are rushed for time.”
However, the good news is that in places like Malappuram and Palakkad, Kathakali continues to remain popular.