The Bell That Sprouts Water 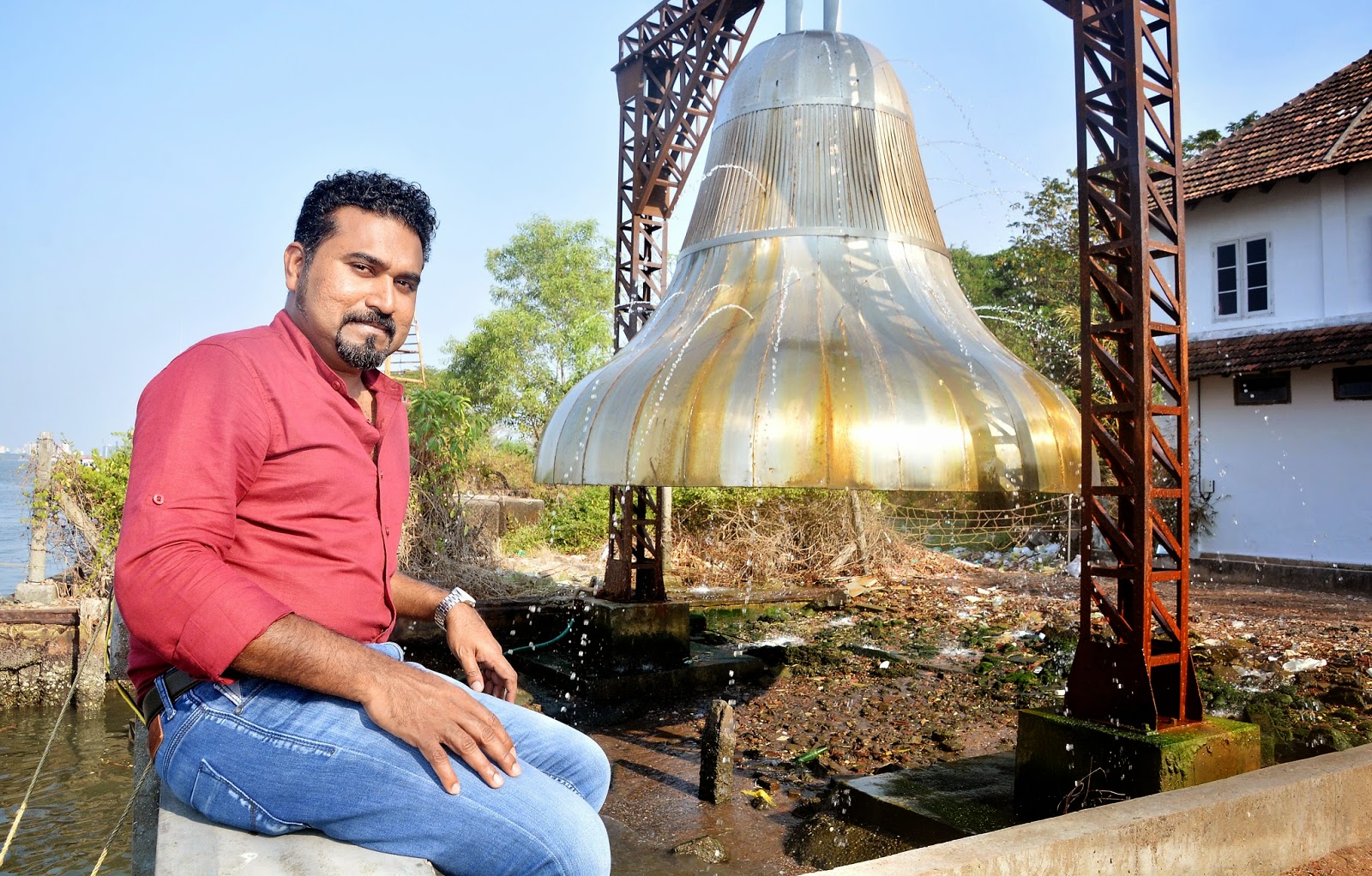 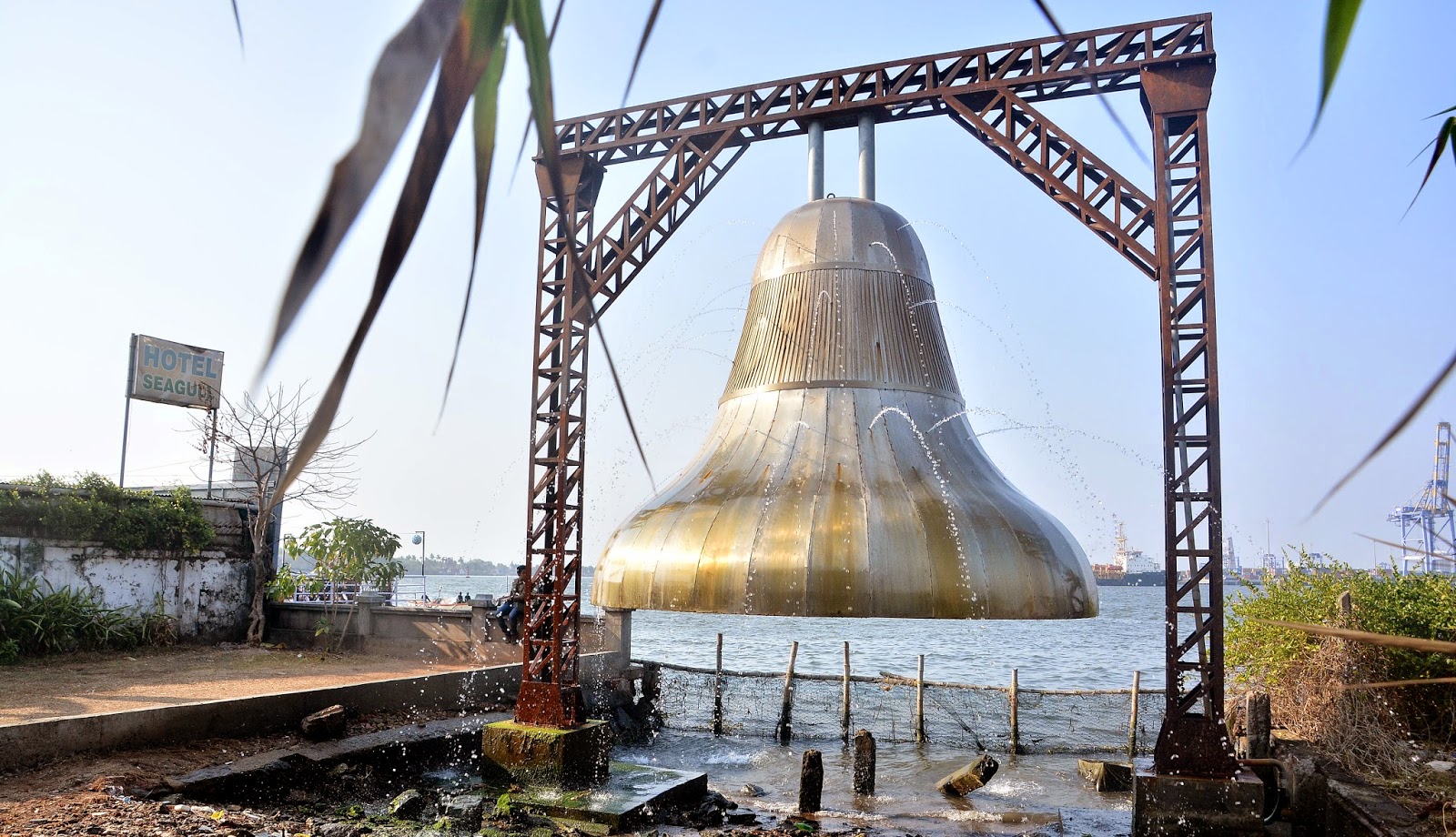 Gigi Scaria's bell installation, at the Kochi Muziris Biennale, highlights the relentless movement of time and the erosion of the works of man

When Gigi Scaria was a child, growing up at Kothanalloor village, in Kottayam district, the elders in the family would tell him stories about a bell. In the early 19th century, a huge bell was being transported from Belgium to the nearby St. Mary's church by sea. But along the way the ship sank and so did the bell. “Whenever the annual church festival takes place, there is a myth that the bell rises up from the sea, and rings by itself,” says Gigi.

As a child, Gigi was also impressed by the three huge bells, that had been brought from Germany, which belonged to the same church. “The image of the bell has been embedded deep in my subconscious mind,” he says.

So when he was invited to make an installation, in the sea-facing backyard of the Pepper House, for the Kochi Muziris Biennale, it did not take him long to come up with the concept of the bell.

This work, 'Chronicle of the Shores Foretold', is a striking installation. The bell, which is made of stainless steel, is at a height of 16 feet. It hangs from a square iron structure. The bell has 64 perforated holes from which water sprouts constantly. “The water represents time, which is boundless, and ever-flowing,” says Gigi. “I also wanted to say that whatever structures man constructs, it gets eroded because of the movement of time.”

When you stare at the bell, at the background, you can notice boats and ships moving serenely past in the Arabian Sea. And the visitors are very happy with this backdrop. “Because the bell has been placed on the edge of the sea, it blends perfectly with the environment,” says visitor Roshni George, a homemaker. She is curious to know how the water keeps sprouting out, so a helpful Gigi switches off the water pump and leads Roshni carefully, over the wet ground, under the bell and points upwards toward a network of plastic pipes that lead to the perforations.

Interestingly, when Gigi had to install the bell, he took the help of the Mappilla Khalasis. In earlier times, these people, who live in north Kerala, would push boats and ships out to sea, by using pulleys. “I purposely invited them, so that we could we reminded of the labour that could be seen on the sea coast,” says Gigi. “They had such a strong presence earlier. But nowadays, they are unwilling to do this hard labour. So times have changed.”

Times are also changing for the Delhi-based Gigi. One of the rising stars of Indian art, he is adept at many art forms: photographs, sculptures, installations, videos and paintings.

Gigi's paintings have been exhibited at Miami, Budapest, Stockholm, London, New York, Barcelona, Berlin, and Dubai. In 2008, his work was shown at the Tel Aviv Museum of Art. It was the first time that the Israeli public had a chance to see contemporary Indian art.

Gigi was also a 2012 University of Melbourne MacGeorge Fellow, and presented an exhibition of video works at the Ian Potter Museum of Art. He has also participated in the Venice and Singapore Biennales.

Gigi's future plans include making a site-specific installation at a sculpture park in St. Louis, USA, as well as a solo exhibition in Mumbai at the end of this year.

Asked why so many Malayali artistes, like Bose Krishnamachari, Riyas Komu, Jyoti Basu and Gigi himself had to leave the state to make a mark, he says, “In Kerala, people have a feel for art, but they don't like to own it. Malayalis are more keen in having palatial houses and expensive cars like BMWs and Porsches.”

The only way out, Gigi says, is for schools to foster a culture of going to art exhibitions and museums. Like it is done in the West. “There are classes which are taken in front of paintings,” says Gigi. “Students are given assignments on art. The West has an immense history of art, but so do we. But we don't regard it that way. Only when we do that, will the common man develop a love for art.”