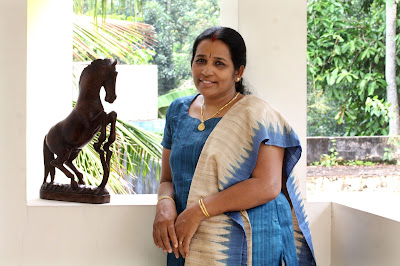 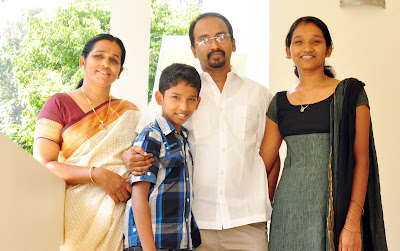 At her home in Vallamkulam, near Thiruvala, Sindhu would sometimes catch a glimpse of her neighbour, S. Suresh Babu. At that time, he was studying at the NSS College in Changanacherry, while Sindhu was doing her pre-degree in Mar Thoma College, Tiruvalla. Soon, her friends, who studied at NSS College, spoke about the artistic talent of Suresh, who was the editor of the college magazine.

“For some reason, I developed a strong affection for Suresh, because he was an artist,” says Sindhu. After a while, whenever they saw each other, they would smile. Since there were no mobile phones, they could not speak to each other.

After a year or so, Sindhu stopped seeing Suresh. When she enquired from her friends, they told her that Suresh was now studying at the Fine Arts College at Thiruvananthapuram. After a long interval of not seeing him, a desperate Sindhu wrote a letter to him saying that she liked him. Thereafter, Suresh came back home the following weekend, but they could not meet. Soon, he began returning every weekend.

Finally, one morning, when Sindhu was going to the bus stop on her way to college, Suresh met her and asked whether what she wrote in the letter was true. “I said that I meant what I had written,” says Sindhu. They discussed the matter in detail. And both agreed that they wanted to get married to each other.

But since Sindhu's father, Gopalakrishnan Nair was very strict, there was no way he would agree to a love marriage. So they decided to wait three years, till Sindhu finished her degree.
In the meantime, on every Wednesday, a letter would come from Suresh to the college for Sindhu. And she would reply also.

On the morning of March 9, 1992, Sindhu told her parents she was going to college and walked out of the house with just a notebook. She took a bus and got down at Tiruvalla. Suresh was waiting in a car with his friends, Dileep, film director, Shiva Prasad and his wife Sudakshana.

They immediately went to the registry office in Kottayam, where Suresh and Sindhu got married. From there, the group went to Dileep’s house in Mallapuram.

On the same evening, an elderly person of their locality, called Prasannan, after being briefed earlier by Suresh, went and informed both sets of parents about the marriage. Predictably, an incensed Gopalakrishnan Nair went to Suresh’s house and told his elder brother Ramesh that his daughter should be brought home within 24 hours.

But later, Sindhu’s mother, Lalitha, persuaded her husband to accept the marriage. However, for five years, the parents had no contact with Sindhu, because her father was angry and upset. “It was a painful time for me,” says Sindhu.

Meanwhile, soon after the marriage, Suresh got a job in a newspaper, as an illustrator, and the couple settled in Kottayam. Today, they live in Kumaranelloor and Suresh is enjoying a successful screenwriting career in Mollywood. His latest film is ‘Kanal’, which was released a few days ago, with Mohanlal in the lead. Some of the other films he has written include ‘Naadan’, ‘Shikaar’, ‘Thandavan’ and ‘Dada Sahib’.

Asked about her husband’s plus points, Sindhu says, “Suresh is a loving person. He has always cared for me. He does not have any vices like drinking or smoking. We are more like friends rather than husband and wife.”

His only negative is that he is short-tempered. “But that is momentary and he never keeps any resentment in his heart,” says Sindhu. “So I don’t get upset when he loses his cool.”

Like most artistic people, the work comes first. “I always tell Suresh that, instead of blood, he has cinema in his veins,” says Sindhu, with a smile. “It is his passion. And I don't have a problem with that.”

In fact, Sindhu is an active collaborator. After Suresh writes his scripts by long-hand, it is Sindhu who keys it into the laptop. “Whatever he writes, he will show it to me and I will give my opinion,” says Sindhu. “I try to react like an ordinary person. If I am working in the kitchen, he will suddenly come and ask me to read something. Unlike most wives, I will not say that I will complete my work and come. Instead, I will stop whatever I am doing and read what he has written.”

But Suresh’s soul mate is his daughter, Aparna, 23, who is a writer like him. “Sometimes, he asks Aparna for her opinion,” says Sindhu. The couple also has a son named Apoo, 14.

As a father, Suresh is very lenient. “He never scolds them and gives them whatever they want,” says Sindhu. “I tell him that there is no need to fulfill all their wishes. They might get spoiled. They should learn to accept a no.”

Finally, Sindhu has tips for those who want to enter Mollywood. “I always tell young people to get a job and follow their passion for cinema on the side,” says Sindhu. “Or, at least, get a spouse who has a job. The problem is that if you don't have talent you will not be able to survive. After a few years, there will be a painful realization that you are going nowhere. By then you may find it difficult to find another career.”

(The New Indian Express, Kochi and Thiruvananthapuram)
at October 30, 2015