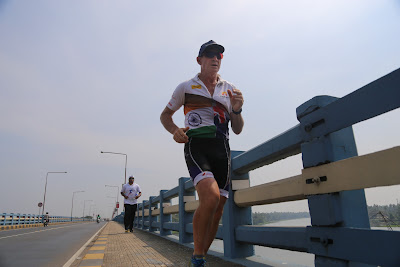 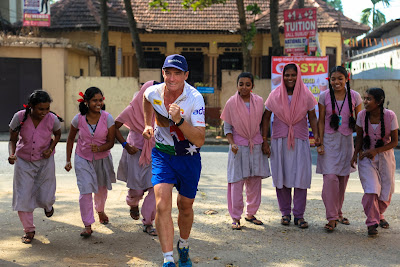 The first sight of Australian long-distance runner Pat Farmer, 53, at a hotel in Kochi, comes as a shock. There is not an ounce of fat in his body. He is sinewy and lithe. The second impression is how red his skin has become.

On January 26, Pat set out from Kanyakumari, on a 4600 km journey, called ‘The Spirit of India run’, all the way to Srinagar. He plans to do it in 65 days. Pat is being accompanied by a television crew which is making a documentary that will be shown in film festivals all over the world.

And Pat has a reason to do this. “I want to inspire people,” he says. “When they look at me, they see the pain in my eyes, the blisters and bruises on my feet, they see I am struggling with the heat, but they also see something else. They see an ordinary man doing something extraordinary.”

But Pat is no ordinary man. For eight years he had been a Member of Parliament. And during a 20-year running career, he has run from the North to the South Pole, across Australia, New Zealand, Vietnam North America and Wet Asia. In the process, Pat has raised millions of dollars for charity. In 2000, the then Australian Prime Minister John Howard presented him with the ‘Achiever of The Year’ Award.

But Pat says anyone can do what he has done. “I want to tell people that they are capable of great things themselves,” he says. “We all have setbacks and difficulties. But it does not matter how many times you get knocked down, as long as you can get up one more time. And that is what this journey is all about.”

Pat has a couple of other goals. “I want to show Australians what a beautiful country India is,” he says. “I am also collecting donations to further girls’ education in India” (online contributions can be made at patfarmer.com).

For this journey Pat is being supported by the Indian Ministry of External Affairs – Public Diplomacy Division, Indian Association of Tour Operators, and the Federation of Hotels and Restaurants Association of India.

But the run is taking a physical toll on Pat, because of the intense heat and humidity. “Pat is exposing his body to extreme conditions,” says Dr. Joseph Grace, the medical and safety director of the team. “He has not experienced this level of humidity before. I have advised Pat to drink plenty of water plus salts.”

And Pat has discovered a quick-to-take food: chicken soup. “It has the necessary salts, calcium, potassium, magnesium, zinc, and iron,” says Dr. Joseph. “And it tastes delicious.”

Earlier, during the reception, Kochi Mayor Saumini Jain said, “Nowadays, within nations and even localities, there are differences on the basis of religions and other issues. That is why these efforts are very important. It brings people closer to each other.”

Says Pat: “This run is not about recognising the trouble, but the hope in the world.”

Nevertheless, it was in West Asia that Pat experienced first-hand, what Saumini had mentioned. “When I was in Lebanon, the people said, ‘Don’t go to Israel, they are all murderers there,’” he says. “And in Israel, they said, ‘You have been to Lebanon. And you have survived?!’ All I want to say is that, at the end of the day, whichever country we belong to, we are all human beings.”

And Kerala is a shining example. “When I set out on my runs in the early mornings, I saw people praying in the mosque,” he says. “After a while, I saw groups of men and women enter a church. Thereafter, I saw devotees in a temple. There are people of so many religions in India but they are worshipping in different, but peaceful ways.”

(The New Indian Express, Kochi and Thiruvananthapuram)
at February 02, 2016