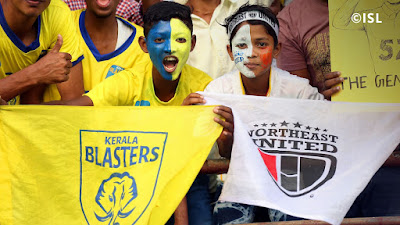 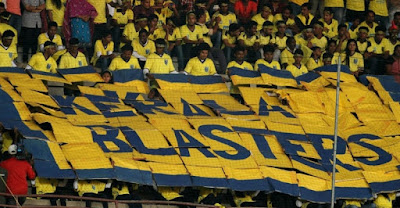 Ashwini Nadar, 22, is standing on the steps of Level 1, at the Gate 17 entrance of the Jawaharlal Nehru Stadium at Kochi on a Sunday evening. But she has a crestfallen look as she watched the Kerala Blasters football players go through their practice drills just before the group match against Northeast United in the Hero Indian Super League.

She is a fan of Josu Currias, the Spanish midfielder. But Ashwini had just come to know that Josu is injured and is not playing. “I have come all the way from Chennai by bus with my sister Abhinaya to watch him play,” she says. “Now, I feel so disappointed.”

But Jijesh S, 28, has no such disappointments. The Cherthala native loves football and is a regular at all the matches. “I buy my tickets online,” he says.

As he talks, there is a cacophony of sounds – bugles blowing, shouts, screams, and a thumping drum beat through the public address system. It is a sea of yellow, but one youngster springs a surprise. He wears a blue and red jersey of the Barcelona football team, with Lionel Messi, written in white letters, at the back.

Another youngster, the 13-year-old Ramesh George turns to his sister, Beena, 15, and says, “Looks like you are the only girl.” But Beena spots an eight-year-old sitting a few rows ahead. “Not the only one,” she says, as she points at the girl. “But I think girls are one in a thousand.”

Yes, indeed, the vast majority of the spectators present are men. After all, football is a celebration of machismo and aggression, apart from skill and talent.

So, when a muscular John Abraham, actor, and owner of North-East United, takes a walk around the stadium, greeting the fans, he gets a huge cheer: Bollywood charm reigns supreme.

Even as he is doing so, on the field, the referee, along with the two linesmen are also doing warm-up jogs across the pitch. Not many of us realise that the referee does as much running as the players during the course of the match.

Here’s a quiz question: what is the way to make 60,000 people become pin-drop silent and not make a movement? It’s very simple. You just have to play the national anthem. It was remarkable how quiet the stadium became. And the roar that erupted when the anthem was concluded must have knocked the decibel record away.

The match begins, on the dot, at 7 p.m. Expectedly, as soon as the Kerala players reach the penalty circle, everybody stands up and crane their necks. And then when the attack peters out, as if on cue, everybody sits down, even as they let out sighs and groans. It is almost like a choreographic dance.

During a break in play, one linesman points at an area in front of a hoarding just near the sideline. Blasters Defender Sandesh Jhingam jogs over and picks up a water bottle. Quickly, he takes a swig and then passes it on to the linesman who also has a sip. It is a rare on-field camaraderie between a player and an official.

The match is boring for long stretches, with poor attacks, passes going a-begging, and a lack of creativity. But it all changes when Blasters Vineeth scores a goal in the 66th minute. Thereafter, the game comes alive.

In the end, watching a match at the stadium is exactly as the song that is played constantly through the public address system: ‘We will rock you’ by Queen.

All of us, at the stadium, are, indeed, rocked by the experience.

(The New Indian Express, Kochi and Thiruvananthapuram)
at December 07, 2016