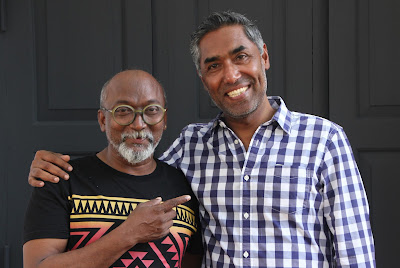 Artistes, guides, assistants and organisers talk about their work as the Biennale gets going

On a recent afternoon, Bose Krishnamachari, the president of the Kochi Biennale Foundation, as well as Trustee V Sunil are having a chat under a large tree at Aspinwall House, Fort Kochi. And one of their worries is that they are unable to pay their daily labourers, by cash, because of the shortage of currency following the national demonitisation drive on November 8.

“It is a huge problem,” says Bose. “One labourer asked me for money, to have lunch, and I was unable to give him. I felt bad. For the others, we are paying by cheque, so there is no problem.”

Meanwhile, Sunil is in a nostalgic mood. “When we started out, people had to figure out the meaning of the word, ‘biennale’,” he says. “Suddenly, everyone understood that there is something known as installation art. And the biggest impact was made by Subodh Gupta’s work of a large country boat. In 2015, you came to the Biennale and got in touch with the world. This year, there are a lot of performances. If a poet or a performance artist tried to create contemporary art, what would that be?”

Sunil says there is one difference between Kochi and the other Biennales. “Art is usually a rich person's hobby,” says Sunil. “But, in Kochi, the royalty of the art world, like the head of MOMA (Metropolitan Museum of Modern Art, New York), as well as the Tate Modern, London, moved along with the local people. That cannot be seen in other biennales. It is a people’s Biennale at Kochi.”

Standing nearby is Latvian artist Voldemars Johansons. “I am organising a sound performance which will include an autorickshaw and their drivers who go on their everyday routes. There will be special horns.”

As to whether the heat is getting to him, Voldemars says, “Yes, it is very humid. Back in Latvia, the temperature is close to zero. I am missing the snow. There is a longing in my heart when I saw the pristine winter pictures sent by my wife. But I like both Kochi and Riga [capital of Latvia].”

Taking a breather, in the shade, is award-winning Lebanese artiste Khalid Sabsabi, who lives in Sydney. He is doing a 100 channel video work, but he is waiting for the equipment to arrive. “It was supposed to come to Kochi directly from Sydney, but, for some reason, the Customs have sent it to Bangalore,” he says. “These include projectors, media players, and stands. With the help of volunteers it will take me two days to set it up.”

And to help him, there are several production assistants, like Vipin Dhanurdharan, Jayesh L R, and Manu VR. “We have been working with the Biennale from 2012,” says Vipin. As for Pinky Sujatha, who has just joined, she says, “I love art and wanted to be associated with the Biennale in some way.”

At the entrance to a building, Guido Wolfram is marking out measurements, using a ruler, on a wooden frame. He is helping the Goa-based artist Orijit Sen to install his installation work. At one side there is a sign which says, 'Mapusa Market'. It is one of Goa's most famous old-style markets, set in the town of Mapusa in Northern Goa. “In one room, we will be re-creating the market,” says Guido. “And in the other, we will be putting up the Charminar monument of Hyderabad.”

The New York artiste Tom Burckhardt is also working hard to get his work ready before the opening. His installation work is made entirely of cardboard. Called 'Studio Flood', the image is that of an artist's studio. “I have decided to turn the room upside down,” he says. “So everything will be upside down. There will be a couple of paintings that will seem to be floating in water.”

Tom's inspiration is Hurricane Sandy which hit New York in 2012. “Many works of my artist friends got destroyed,” he says. “I felt a sense of empathy. When Sudarshan [Shetty, the curator] asked me to take part in the Biennale, I thought this would be a bridge to Kerala, which will face the danger of rising seas, because of global warming.”

Standing outside are interpretation guides Nidhi Tambe, from Kollam, and Dona Johnny from Idukki. They are part of an eight-member team. Their job is to explain the various art works for visitors. “For the past two months, we have undergone a rigorous training,” says Nidhi. Adds Dona: “We have been talking to the artistes, have been involved in production work, and helped in the editing of the guide.”

Both have a huge sense of anticipation. “We are waiting to see how it will turn out,” says Nidhi.

Noted architect Tony Joseph is also keen that his 3500 sq. ft. hall, at the Cabral Yard, turns out well. The walls are made of mud and debris. “Somebody has donated the stones, as well as the lighting,” says Tony. “It will be taken back after the conclusion of the Biennale.”

The ceiling is made of reusable insulation panels. Above it, there is recycled flex sheets, which has been bought at Rs 3 per sq. At the back, there are traditional galleries made of arecanut. “These are similar to the galleries in Malabar where I grew up with,” says Tony. “So, I feel a sense of nostalgia.”

(The New Indian Express, Kochi and Thiruvananthapuram)
at December 13, 2016