A Touch Of Paradise 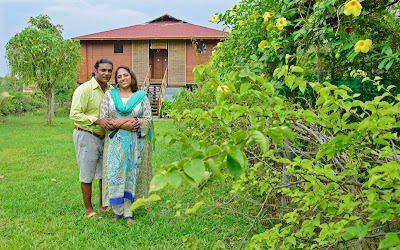 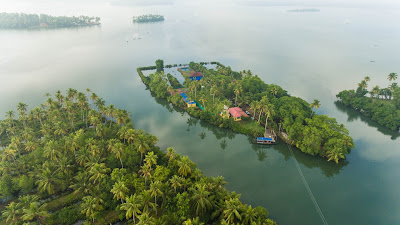 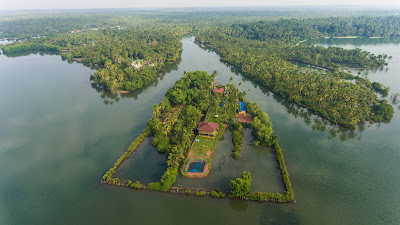 Vini's Farm, near Munroe Island, in Kollam, Kerala is a place where you can get in touch with nature and recharge your batterie


Photos of Aram Paul Chittilappilly and wife Vinita by BP Deepu
By Shevlin Sebastian
At 4 a.m., manager Binu Babu received a call. The Swedish guest Vincent Borg had an unusual request. He wanted to go kayaking. “Sure Sir, we can arrange it,” said Babu. Thus, in pitch-black darkness, lit up by a torch, Vincent went to the bank and got on to a kayak. He went rowing for more than an hour and watched the dawn break on the eastern horizon.
Owner Aram Paul Chittilappilly smiles as he recalls the incident. “That's the type of service we would like to give,” he says. “I have told the staff the word 'no' does not exist for us.”
Aram is the owner of Vini's Farm, a four-acre island, near Munroe Island, which is at the confluence of the Kallada River and the Ashtamudi Lake, 140 kms from Kochi. There are only two luxury rooms, set in a wooden cottage, with a grand view of the water and the small hills in the distance. “Either a couple, two couples or a family can stay,” says Aram. “The USP is that they will have the entire island to themselves.” To maintain privacy, there is a natural perimeter of bushes and mangrove shrubs, with a door at one side. Staff can only be summoned through a walkie-talkie.
Interestingly, there are no televisions or the Internet, and there is a cute message posted on the wall: 'Sorry no Wifi. Talk to each other and enjoy nature'. Aram also makes a pitch for water conservation, with a message in the washroom: 'Save Water. Shower with your girlfriend'.
The food is the local Kerala cuisine, made from organic vegetables like tomatoes, beans, and brinjals. The other activities include kayaking, a boat ride at sunset, and a village tour. “You can also go fishing and catch the freshest pearl spot, and get it cooked, according to your preference,” says Aram.
In fact, it was the taste of the pearl spot that drew Aram to the island in the first place. A few years ago, while visiting his in-laws, at nearby Kollam, he went for a boat ride and stopped at the island. The owner, Sebastian, offered him a rice meal with pearl spot. “It was so tasty,” he says. After an interval, the Dubai-based Aram again visited Sebastian, and the latter said that he was planning to sell the island. And that was how Aram bought it.
Thereafter, on March 19, 2016, Aram held a surprise birthday party for his wife, Vinita, on the island where he invited friends, and relatives. “It was on that day that I gifted the island to Vinita as a present,” says Aram. “So, we decided to name it as Vini's Farm.”
An overwhelmed Vinita says, “It was one of the most unforgettable experiences in my life. And the island is such a nice place to stay.”
Others agree. Says Crystal, the American wife of a Chennai-based airline pilot, Vivek Zachariah: “Not only were the rooms absolutely stunning, the food was awesome! A must-try is their home-grown passion fruit juice. Yummy!”