When Words Have Power 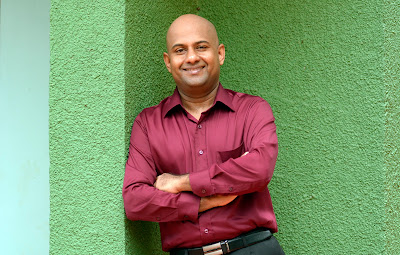 Manoj Vasudevan, the first Malayali to become the World Champion of Public Speaking talks about his experiences

The Singapore-based Manoj Vasudevan walked with a confident stride towards the stage at a hall in Vancouver, Canada. Then he said, “When I was 24 years old, I was living in India. I was waiting for Cupid to shoot his arrow and find me the perfect partner. Guess what? It seems Cupid does not live in India. Soon, I went to another angel who had all the answers: my mama. 'Mama I can’t find good girls? How will I ever marry?' She said, ‘No problem. We can fix it.’ My Mama offered to introduce me to some good girls.”

And Manoj described how he met, fell in love with Sindu and got married. And then he described the ensuing relationship troubles that affect all couples.

This speech, titled 'Pull Less and Bend More' resonated with the 2500-strong audience, as well as the judges. Manoj was adjudged the Toastmasters International World Champion of Public Speaking, which is regarded as the Olympics of Public Speaking. More than 35,000 participants from 142 countries took part, over six months of eliminations, before ten people made it to the final, held on August 26. Incidentally, Manoj is the first Malayali to win it.

Asked the reasons behind his victory, Manoj says, “My message was universal. Everybody has faced problems in their relationships, so they could relate to it.”

He felt overwhelmed when a 40-year-old black American woman, Miss Cooper came up to him, and said, “Your speech pulled at my heart strings. I am divorced now but will be getting married again. But I will remember all that you said for the rest of my life.”

Another reason for his win was because he approached the event with a different attitude. “I realised that I should give a speech, not to win the trophy, but to go beyond that, and say something meaningful. I looked at it as an opportunity to speak to the world for seven minutes. So what is the one thing I wanted to say​? I realised that everybody is fighting and arguing with each other. In the US, the Republicans are fighting with the Democrats, and [US President] Donald Trump with the North Korean leader Kim Jong-un. So I wanted to say that if we try, we can all get along with each other.”

Manoj grew up in Thiruvananthapuram, the son of a senior administrative officer at the directorate of health services. After graduating from the College of Engineering, he worked in Mumbai and the Technopark at Thiruvananthapuram before he left for Singapore in 1998, where he worked for numerous companies. But, today, he runs his own consultancy firm, 'Thought Expressions', which teaches aspirants on how to be effective leaders. Manoj is also a stand-up comedian, and has written a best-selling self-help book called, ‘Mastering Leadership The Mousetrap Way’.

Meanwhile, when asked about the most difficult aspect of public speaking, Manoj says, “It is the pause within a speech. For example, when you are talking about your friend, the audience is seeing their friend. If I say something about a classroom, they are thinking about their classroom. They are listening to you, and forming images in their mind. Sometimes, you need to give time to the audience to visualise and assimilate those images. If you talk so fast, you are erasing the scene and so they cannot enjoy the speech.”

The pause is important when you ask questions. “Also, when you say something profound,” says Manoj. “The audience needs the time to think. [Former US President] Barack Obama pauses a lot in his speeches. And that is why his speeches are so powerful. The pause expands Obama’s presence and that is why the audience thinks, ‘This guy is awesome’.”

(The New Indian Express, Kochi, Thiruvananthapuram and Kozhikode)
at September 13, 2017