A Continental Link For Homesick Tourists 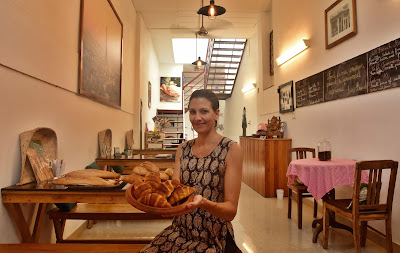 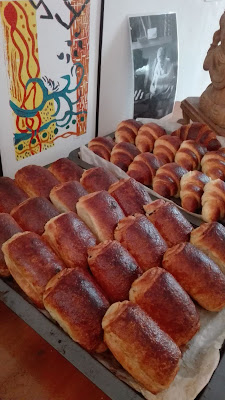 On a recent Sunday, at 'Alice Delices' boulangerie (bakery) at Fort Kochi, Fanch and Viviane Le Guellec dropped in. They are friends of Alice Floch from France. “We came to know Alice had started a bakery in India,” says Viviane. “So we were keen to taste the items.”

And they liked what they ate. “It was as good as it was in France,” says Viviane In fact, the Guellecs are customers of Alice at the 'Paroles de Pain', an organic bakery in Pont-l'Abbé on the west coast of France. “We buy bread and cakes,” she says. “Sometimes, my husband, who is retired from government service, helps in bread deliveries.”

Another fan is the Paris-based Clarisse Alx. “The best French bakery in India is in Fort Kochi,” she says.

A recent customer was Frenchwoman and Mollywood star Paris Laxmi. She woke up one morning at her home in Vaikom (37 kms from Kochi), longing for some home food. So she headed to the bakery at Fort Kochi.

“By the time I arrived, at 12 noon, my favourite Pain Au Chocolat (chocolate croissants) was sold out,” says Laxmi. “So I had a cinnamon cake as well as a fresh lime juice. It was as good as any bakery in France.”

Alice first came to Kochi five years ago and fell in love with the place. “Fort Kochi is a special place, so different from other parts of Kerala and India,” she says. “It is very quiet, and green. In Pont-l'Abbé, like in Fort Kochi, we also see a lot of fishermen. So, there are a lot of similarities.”

Alice decided to open the bakery in late 2016, during the Kochi Biennale, because she felt there would be takers since it is the only French bakery in Fort Kochi. “In fact, from the very beginning, we had a lot of French and European people visit our bakery,” says Alice. “But we also get Indians, too.”

To suit the Indian palate, she has made a special bread which has cashew nuts, almonds, pistachios and grapes. For certain breads, Alice has added cinnamon. Apart from this, Alice makes cashew and brownie cakes as well as lemon pies. She also offers a French-style thali breakfast. It is priced at Rs 300 and is popular.

“This breakfast consisted of different types of bread, served with butter and pineapple jam, as well as a bowl of mixed fruit,” says tourist R. Ron from Europe. “And, according to my partner, she had the best coffee on the trip at the Delices.”

The locals also love her items. During Easter, Alice had bumper sales of her plum cakes. “Many Malayalis were my customers and said they liked it,” she says.

To ensure that all is fresh and crisp, by 7.45 a.m., the time the bakery opens for its clientele, Alice has to get up at 4 a.m., to start work. For most of the bread items, she uses a mix of flour, yeast, salt and water.

But to make croissants, she has to do it in an air-conditioned kitchen. “If I try to make it outside, the butter will melt,” she says. There is a lot of kneading of the dough and the rolling pin is used several times before the items are put in the large oven which is located in the garden at the back of the bakery.

“I love baking,” she says. “But what I enjoy equally is to watch the reaction of the people when they eat the food that I make. Many a time, after they eat a croissant a smile breaks out on their faces.”
at May 16, 2018