Falling Against A Rod 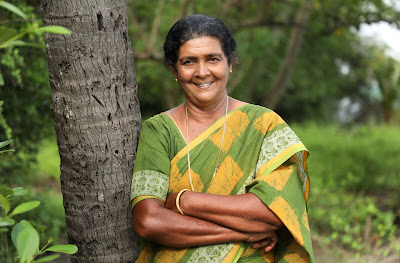 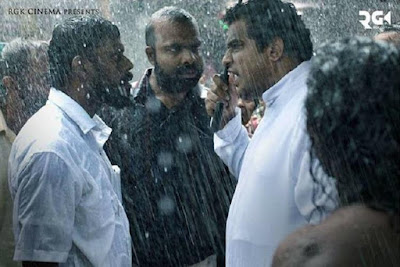 In Ee.Ma.Yau. (2018), in the climax scene, Eeshi (Chemban Vinod) realises that he cannot bury his father Vavachan Mesthri in the cemetery because of the local priest's suspicion that Vavachan’s death is a murder. So, Eeshi decides to take matters into his own hands. At his house in Chellanam, on a day when it is raining heavily, with the villagers gathered around, wondering about the impasse, Chemban decides to bury his father in the courtyard.

As the people realise this, they are shocked and dismayed. So also is his mother Pennamma, played by Pauly Valsan. She rushes out of the house, towards Chemban, screaming, “No son, no, what are you doing?”

But Chemban is in such a rage, that he pushes Pauly away.

“I lost my balance and the back of my head hit an iron rod which was protruding from a pandal which had been put up,” says Pauly. “I shouted, 'Amma' very loudly, but since it was a scene where there was so much of noise, nobody heard me. And I fainted.”

But director Lijo Jose Pelisserry noticed the mishap through the camera lens. He came running up and said, “Are you okay?” By this time, Pauly had regained consciousness. So Pauly said she was okay and there was nothing to worry about. “It was such an important scene that shooting needed to go on,” says Pauly. “Taking part in this climax was one of the most unforgettable moments of my career.”

Incidentally, Pauly won the Kerala State Award for Best Actress in a character role for this film.

There was also intense drama during the shoot of 'Beautiful' (2011), in which Pauly played a maidservant. At that time, she was also a lead character in a play. One day, at 7 a.m., she went to the set at Kalamaserry. She had one scene to shoot. That night, at 9.30 p.m., there would be a drama performance at Adoor. Pauly thought that she would have enough time to shoot her scene and proceed to Adoor, 125 kms away. But the whole day, director VK Prakash did not call her.

Pauly began to feel panicky. “If I did not reach the hall at Adoor, on time, the audience would start throwing stones,” she says. “So, I decided to slip away.”

She went to the gate. There was a watchman. However, he belonged to the film crew.

The watchman asked Pauly what had happened. So, she told him her dilemma. “He asked whether I had acted in an earlier scene,” says Pauly. “I said yes. Then he said, 'I cannot allow you to leave because the continuity of the scenes will be spoiled'.”

So Pauly returned to the set and began giving worried looks to Prakash. Then her eyes filled up. The production controller recognised her predicament. He told the director, “Prakash Sir please shoot the scene. Pauly Chechi is going through a lot of tension.”

So, the scene was shot. But by this time, it was 6.30 p.m. So, she immediately set out in a taxi. But on the highway, there were several traffic jams. “I knew there was little chance I could make it on time,” she says. “When I reached Kottayam it was already 9.30 pm. Till this time, the troupe members kept calling me. But after that, the calls stopped.”

Anyway, Pauly carried on. By the time, she reached the venue, it was 11 pm. And what she saw astonished her. The entire ground was under water. Apparently a severe storm had hit the area. It rained so hard that the organisers had no option but to cancel the show. “God saved me,” she says, with a beaming smile at her home in the Vypeen islands. “It was a miracle. Anyway, then and there I decided I cannot have two careers: films as well as theatre. So I stopped theatre. Now I only do films.” Till date, Pauly has acted in 45 films.

For Iyobinthe Pushtakam (2014), the shooting was in Vagamon. Since there was no vehicle that the production team could send to collect Pauly from Ernakulam, they asked her to come to Errattupetta. And they said they would arrange for Pauly to be picked up. “But when I reached Erattupetta, it was 8 pm. And I just missed the last bus to Vagamon,” says Pauly. “She called the production controller who asked her to take an auto-rickshaw. If he sent a car, it would take too much time.”

So she hired one. They began travelling. After 45 minutes, they were still travelling. It was dark all around. Pauly began to get nervous.

She rang up the production controller and scolded him for making her come all alone. “But since the driver was a good man, he took me safely,” says Pauly. “It is not easy to be a woman actress. Because of the nature of the job, I have to travel alone to many locations. But God has always protected me.”