When Gandhi Said Do Or Die (Karo Ya Maro) 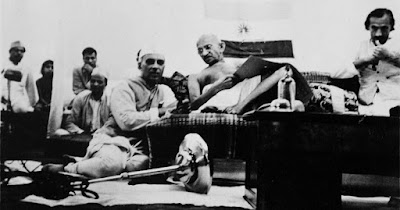 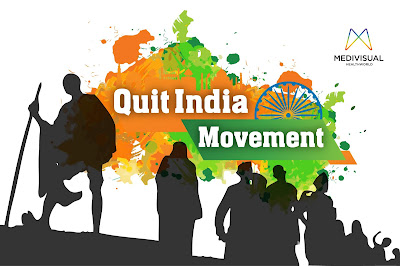 Photos: Jawaharlal Nehru with Mahatma Gandhi in Mumbai; the poster of the movement

The crowds began to gather at Gowalia Maidan in Mumbai on August 8, 1942. In a panoramic view, it was a sea of white: the uniform of the Congress Party in those times. In a YouTube video, you can see the leaders making their way to the podium. Sardar Vallabhbhai Patel was seen chatting to a colleague. The future Prime Minister Jawaharlal Nehru, who was clad in a white kurta and holding files in his arm walked through the crowds, followed by Dr Zakir Husain as they made their way to the podium.

Nehru waved to the crowd. The people shouted their appreciation. This was the start of the Bombay session of the All India Congress Committee.

Gandhi was sitting on a low charpoy, bare-bodied, his legs turned to one side, while noted leaders of the time spoke softly in his ears. Gandhi listened attentively. Nehru sat on the floor, in front of Gandhi and had a far-away look in his eyes.

Time passed. Many people spoke. Soon, it was Gandhi's turn.

He stood in front of the microphone. The crowd fell silent. Then Gandhi started speaking:

'Ours is not a drive for power, but purely a non-violent fight for India’s independence. In a violent struggle, a successful general has been often known to effect a military coup and to set up a dictatorship. But under the Congress scheme of things, essentially non-violent as it is, there can be no room for dictatorship.

'A non-violent soldier of freedom will covet nothing for himself, he fights only for the freedom of his country. The Congress is unconcerned as to who will rule when freedom is attained. The power, when it comes, will belong to the people of India, and it will be for them to decide to whom it placed in the entrusted.

'We shall either free India or die in the attempt; we shall not live to see the perpetuation of our slavery. Every true Congressman or woman will join the struggle with an inflexible determination not to remain alive to see the country in bondage and slavery. Let that be your pledge.

'Let every man and woman live every moment of his or her life hereafter in the consciousness that he or she eats or lives for achieving freedom and will die, if need be, to attain that goal. Take a pledge, with God and your own conscience as witness, that you will no longer rest till freedom is achieved and will be prepared to lay down your lives in the attempt to achieve it. He who loses his life will gain it; he who will seek to save it shall lose it. Freedom is not for the coward or the faint-hearted.'

Gandhi exhorted the people to 'Do or Die' (Karo Ya Maro). This, along with the words, 'Quit India', provided the galvanising force that swept through the land. The speech was frequently interrupted by cries of 'Mahatma Gandhi Ki Jai'.

It was also at the Maidan that freedom fighter Aruna Asaf Ali proudly raised the Indian tricolour for the first time in the country. (Today, the Maidan has been renamed as August Kranti Maidan).

However, all these actions had its repercussions. The next day, August 9, Gandhi and many Congress leaders and members of the party were arrested. This led to mass demonstrations throughout India. In Mumbai, people demonstrated on the streets holding banners which said, 'Boycott British goods'. The British responded by using their batons along with the indiscriminate use of tear gas. Thousands were arrested.

Part of the reason for the Quit India movement was the failure of the Cripps Mission in March, 1942. Sir Stafford Cripps, the leader of the House of Commons had been asked by Prime Minister Winston Churchill to get the understanding and cooperation of Indian leaders as World War 11 raged on.

But when Cripps arrived he said the British were unwilling to allow the formation of a national government. And according to the preamble of the Draft Declaration, the aim was the creation of a new Indian Union. It would be associated with the United Kingdom but equal in every respect, and in no way subordinate in any aspects of its domestic and external affairs. But regarding the subject of defence, it would remain under the control of the British.

Cripps also said that if any province was not willing to accept this they would be given the same status as the Indian Union. All this was unacceptable to the Congress. Without much ado, the Congress Working Committee rejected the Declaration on April 7, 1942.

(This was published in the Gandhi special supplement, The New Indian Express, Kerala editions)
at October 04, 2018