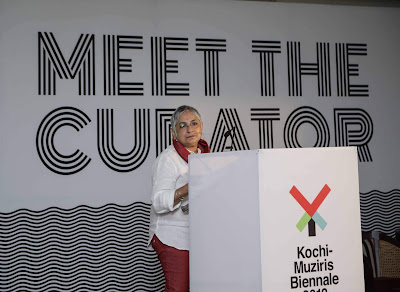 Anita Dube, the curator of the Kochi Muziris Biennale, said that she was inspired by a sculpture of the late Malayali artist KP Krishnakumar (1958-89). “It is about a young boy who is listening -- to the stones, flowers and earth,” says Anita, at a ‘Meet The Curator’ function held in Kochi on Friday. “I chose this work because it is a boy who has not yet acquired a masculinity that all men aspire to be. He is in a nebulous state. I am working against that type of toxic masculinity that has been the norm in our social life.”

So, not surprisingly, more than half of the 89 artists who will be taking part in the Biennale, (December 12, 2018 - March 29, 2019), are women. “They do not get as many opportunities as the men,” says the first woman curator of the Biennale. “So I wanted to correct that.”

The theme, incidentally, is titled ‘Possibilities of a non-alienated life’. And Anita came to it through prolonged thinking and reflection. “The first question I asked myself was who is my primary audience?” she says. “Is it the one percent that goes to Venice, Sharjah and the Kochi Biennales? Or is it the six lakh spectators who came to the last edition with no stake
in culture except for a thirst for aesthetic knowledge?”

And she realised that she needed to showcase accessible artworks for the majority. Also, she wanted the visitors to be participants. So, apart from the exhibition area, Anita is setting up a pavilion where anybody could come and speak, show a film clip, or talk about a lecture. “You could even sing a Malayalam song,” she says. “I am hoping conversations could develop, and arguments could be had.”

Interestingly, Anita, in her travels to over 30 countries to select artists, decided to focus on those from Latin America, and Africa apart from many countries in South-East Asia, like Malaysia, Indonesia and Thailand. “I want to give a chance to those who are on the margins of international art,” she says.

Earlier, Bose Krishnamachari, one of the founders of the Biennale stated that after the floods devastated Kerala a few months ago, he called up Anish Kapoor, one of the world’s leading artists. He told him that they had set up an ‘Art Rises For Kerala’ initiative and were planning an auction of works. Anish replied, “Anytime for Kerala and the Kochi Biennale Foundation.”

And Anish has already contributed a work. The other notables who will contribute include Dayanita Singh and Subodh Gupta. “About 40 national and international artists will take part in the auction that will take place in Kochi on January 18, 2019,” says Bose. “The proceeds, which I hope will reach Rs 5 crore, will be given to the Chief Minister’s Fund.”

Another notable plan is to re-use the materials which will be used to set up the pavilion at the Cabral Yard to build houses for the downtrodden. “We will Recycle, Reuse and Rebuild,” says Bose.