The Crusader Of Languages 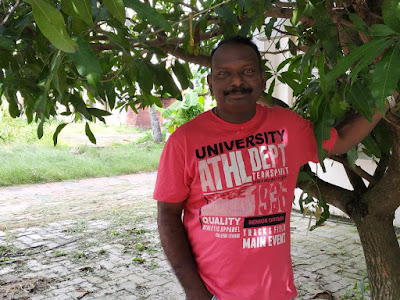 In his 25th year as a translator, the Kochi-based Santosh Alex talks about his career

It had been a long and tiring day for Santosh Alex. Nevertheless, by 7 p.m., at his home at Thevara, Kochi, this Assistant Chief Technical Officer at the Central Institute of Fisheries Technology is at his desk. Next to him are his two older children, Jason, 13, and Jessica, 11, who are doing their homework.

And so is Santosh, in a way. He is translating Benyamin’s short story, ‘Shatru’ into Hindi. The story is an insightful look into mob psychology.

In between his assignment, Santosh has dinner, and later, the children, his wife Jai and their one-month-old baby Jerome go to sleep. But Santosh carries on working, past midnight before he calls it a day.

Santosh is now in his 25th year as a translator. “I have translated directly from English and Malayalam to Hindi, and Hindi to Malayalam,” says Santosh. “For Tamil and Telugu, I do live translations. That means I sit with the author and we work together.”

Asked about the behaviour of writers, Santosh says, “There are authors who do not open up to strangers and are very guarded. There are a few who live cut off from people, while others are generous and kind and like to have conversations.”

One such person was Jayanta Mahapatra, the legendary Indo-Anglian poet. Santosh met him at his home in Cuttack a few years ago. He had travelled from Vishakapatnam, where he was staying at that time, to give a book of poems written by Jayanata that Santosh had translated into Hindi.

As soon as Santosh entered the house, he saw that Jayanta was having his breakfast.

The poet said, “I am very sorry. I am on pills, which I need to take on time, and have my breakfast soon after. So, without your permission, I am having my breakfast.”

Santosh was taken aback. “I felt that there was no need for Jayanta Sir to apologise, because I was just a beginner,” he says. Nevertheless, Jayanta provided breakfast for Santosh and they started chatting about poems and his magazine ‘Chandrabhaga’. He was helped by the poet Rabindra K Swain who was the assistant editor.

After a while, Rabindra came visiting. Soon, Jayanta and Rabindra asked Santosh to recite the poems. As Santosh did so, he noticed that the duo were whispering in Oriya to each other. After a while, Rabindra said, “Your Hindi recitation does not give any indication that the poem had been translated. It seemed as if it is an original poem. Thank you, it is very nicely done.”

Santosh felt elevated. “I will never forget the kindness and hospitality of Jayanta Sir, who is 90 now,” says Santosh, who has also published his own poems and taken part in international literary festivals in Istanbul and other places.

Meanwhile, when asked how he got interested in doing translations, especially in Hindi, a language not many Malayalis are skilful in, Santosh says, “I was born and brought up in Visakhapatnam and studied in the Kendra Vidyalaya, where I learnt Hindi, English and Sanskrit. My Hindi teacher Malathi Devi engendered in me a love for the language. I was a topper in Hindi during my school days.”

So, it was of no surprise that Santosh ended up doing his MA in Hindi. And somewhere along the way, he got interested in doing translations.

As for the rewards of doing translations, Santosh says, “In my own small way, I am contributing to enriching Indian literature. I am building a bridge between different cultures, especially during a time when there is so much of division in society.” In fact, his work had received appreciation earlier. Santosh has won the prestigious ‘Dwivagessh Puraskaar’ National Award for Translation from the Bhartiya Anuvad Parishad in 2008.

But, of course, there are negatives. There is hardly any money that is paid to translators. “80 percent of the publishers say that they do not sell enough copies,” says Santosh. “This is not true, because I know of books that have gone into the second or third reprints. Most publishers exploit the author as well as the translator. And translators get far less respect than the writer.”

He gives an example. When Benyamin became the winner at the JCB Prize for Literature recently for his work, ‘Jasmine Days’, he received a prize money of Rs 25 lakh, while the translator Shahnaz Habib got Rs 5 lakh. “It should be fifty-fifty,” says Santosh. “Because without the high-quality translation, Benyamin would not have won the award. Nevertheless, I am happy that Shahnaz got a good amount.”

But whether there is any amount or not, Santosh himself is committed to serving Indian literature. He is, in fact, a crusader… of languages.

(The New Indian Express, Kochi, Thiruvananthapuram and Kozhikode)
at November 28, 2018