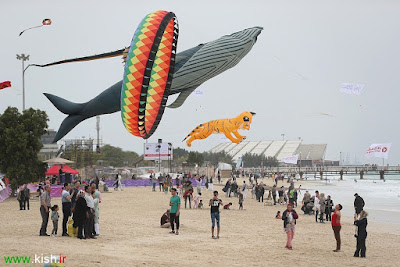 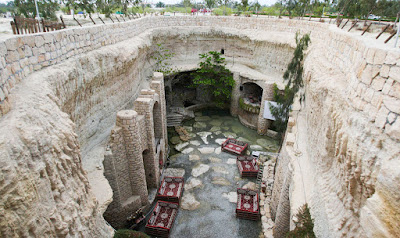 Photos: A kite festival; the underground city of Kariz

When the Aluva-based kiter Rajesh Nair was invited by the Mica Group of Companies in Iran to participate in a kite festival he felt very excited. But when they told him it would be held on Kish Island, he scratched his head. ‘Where is it?’ he thought. He googled it, and came to know that it was near Iran’s Hormuzgan Province in the Persian Gulf. It is a one-and-a-half hour flight from the capital Tehran to reach the island. But to reach Tehran from Kochi takes 11 hours.

Rajesh called his Dubai-based friend Uttam Kumar, who is also an organiser of kite festivals, and the latter quickly gave some reassuring news: it takes only 40 minutes to reach Kish from Dubai. What also made it easier was the fact that India, along with a few other  countries is in the ‘No Visa’ category.

So last month, Rajesh flew to ‘Kish’ (which means creed, belief or religion and is the name of an ancient city in Persia). On the flight, he noticed several Malayalis. He was told later that they they were working in the hospitality industry as well as on the different oil rigs near the island.

The population of the 80-km long island is 30,000 but the number of annual visitors is 15 lakhs. These include tourists from Denmark, USA, Russia, Saudi Arabia, the United Arab Emirates, Qatar, Kuwait, and Afghanistan. The currency is the Iranian rial. For one rial, you get Rs 42. Surprisingly, you cannot get the currency at the Kochi airport. “But the problem with the rial is that you have to spend it all in Kish,” says Rajesh. “So, it is better to take American dollars.” Incidentally, Kish is a Free Trade Zone.

One of its biggest attractions are the pristine beaches, with its white sands. The water is crystal clear, so you can see the fishes swimming. However, you cannot wear bikinis on the beaches. “Iranian men and women face restrictions,” says Rajesh. “They cannot even wear shorts. The ladies have to always wear a hijab (a headscarf). But the people are very friendly.”

Some of the other attractions include jet and water skiing, parasailing, paragliding and snorkelling. Then there is the Dolphin Park, which has 22,000 palm trees, in an area of 170 acres. Apart from dolphins, you can see whales and sea lions, Other attractions include a butterfly garden, an artificial rain forest, cactus and orchid gardens. In the Ocean Water Park, you can enjoy 13 rides and go swimming in four pools.

There is also a thousand-year-old underground city called Kariz which was an ancient underground aqueduct. It’s most arresting feature is the numerous wells, with a diameter of 50 feet and a depth of 300 feet. “All these wells are inter-connected and look very impressive,” says Rajesh. There are numerous shops and restaurants where you can enjoy Iranian food.

The cuisine is tasty. The Iranians use almonds, walnuts and dates in their food, which includes rice, different types of fish, and meat -- ham, lamb, mutton, and chicken.
What is a surprise to know is that Kish is the third-most popular vacation spot in South-West Asia after Dubai and Sharm-el-Sheikh (Egypt).

Meanwhile, the kite festival was the first of its kind on the island. There was a huge kite, 80 feet long and 30 feet wide. Made by one of the foremost kite-makers in the world, Peter Lynn of New Zealand, it was in the form of a Manta Ray fish.

The kite, which is owned by kiter Mehmet from Turkey, was tied to some sand bags. But suddenly, a fierce wind began. The kite, which weighed 750 kilos, broke away. As it rose, it got stuck in a tree. “In the end, a branch had to be cut, to bring down the kite,” says Rajesh.

However, there were drawbacks for the kiters. The beach was long, but not wide enough. “Kiters need wide beaches,” says Rajesh. “But we managed to put up a show and a lot of people came. Many had never seen a kite festival of such a magnitude before. They wanted to hold these large kite and see what it is.”

Rajesh had brought along a theyyam kite as well as box and sport kites. “I also made a special kite which is shaped like a parafoil,” says Rajesh, who as president of the Kite Life Foundation is a technical partner of the festival. Another innovation was bubbles, which form when you blow through a solution. These large bubbles will float for a long distance. “The solution is made with a mix of guar gum, dishwashing solution, glycerine, gel, citric acid and baking soda,” says Rajesh. “Overall, it was a nice experience. I would definitely like to go back to Kish.”