A trove of information 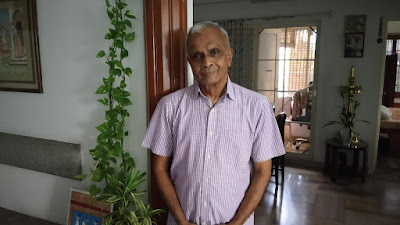 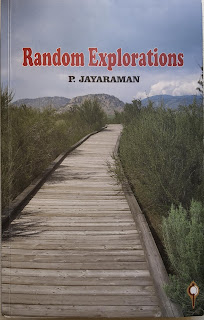 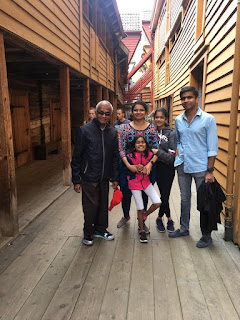 Pics: Author PJayaraman at his home in Kochi; the cover; with his family members in Norway

A few years ago, G. Balagopal, who was a former Deputy Secretary in the Information and Broadcasting Ministry was standing in line at the airport at Jeddah to gain entrance to Saudi Arabia. All the hand-bags were being checked. Behind him stood Parminder Singh (name changed) from the Ministry of External Affairs. Parminder leaned forward and whispered, “I have a scotch whisky bottle in my bag.” When Balagopal heard that, he felt an alarm within himself. In front of him, a man was having his bag taken apart, and even the chocolate pieces had been broken to see whether there was any alcoholic content. So, Balagopal knew a major fracas was about to take place.

Soon, it was his turn. The security officer opened the zip and took out the contents: There was a shaving kit and a few underwears, apart from shirts and trousers. The officer was not glad to see the undergarments. He twitched his nose and asked Balagopal to pack and close the bag and sent him ahead. When he looked at Parminder, he was probably expecting the same. Instead of checking his bag, Parminder was waved on. “It was one of the closest shaves in my life,” says Balagopal. “I heaved a huge sigh of relief.”

This anecdote has been recounted in management consultant P Jayaraman’s ‘Random Explorations’, which has been published by Prism Books. It is an eclectic mix. There are long profiles (7000 words and more) on Dr M V Pylee, the father of management education in Kerala, G. Balagopal, former civil servant and C. Balagopal, the noted entrepreneur. Then there is a study on power and inequality.

Here are some fast facts from the chapter:

India’s richest one percent owned 58 percent of the country’s wealth.

The top 10 percent earned 80.7 percent of the total income in the country.

India accounts for almost half the world’s poor but the total individual wealth is $5600 billion. Not surprisingly. India is the second-most unequal country in the world.

In another chapter titled, ‘Some recent trends in management’, Jayaram’s tips for career success in today’s turbulent world are insightful:

1. The word loyalty has been replaced by ‘business contract’.

2. You remain in a job as long as you are the best person to execute a role. It has, therefore, become essential for you to learn continuously for your sheer survival.

3. Tenure has been replaced by relevance. Every job is for a limited period. Once a CEO, always a CEO is no longer valid.

4. One should focus on short-term plans in today’s rapidly-changing environment. Long-term planning has become impossible and of little value.

In another section, he talks about speed. “In this age of disruption, only fast learners can survive and flourish,” says Jayaraman. “Traditionally, people used to treat information as power and hoard it as a method of control. But today’s organisations can ill afford to be hoarders. They have to absorb new information every hour, every day. Companies should instil curiosity and experimentation to succeed.”

The next section is about travel. Thanks to a son, Anand, who is based in Geneva and a daughter, Deepthi, who is living in Nottingham, Jayaraman has travelled to several countries, including Greece, Poland, Split (Croatia), China, Czechoslovakia, Norway and Australia. For each, he has written a history, some of the best places to visit, the archaeological sites, weather, literature, economics, demography, the characteristics of the people, and food and beverages.

Regarding food in Norway, the most common food is polse (hot dog) with pancake, which is topped by raw onions and various dressings. In Czechoslovakia, the staple food is pork, beef, birds like duck and pheasant, and carp. In Poland, Jayaraman enjoyed the Placki Ziemniaczane, a pancake filled with potato and topped with a meaty sauce.

The last section is about the books he has read. These include ‘Half Lion: How PV Narasimha Rao transformed India by Vinay Sitapati, ‘India Rising: Fresh Hopes, New Fears’ by Ravi Velloor, and ‘An Era Of Darkness: The British Empire in India’ by Shashi Tharoor.

In Tharoor’s book, Jayaraman quotes FJ Shore, a British civil servant in Bengal who testified in the House of Commons that “the fundamental principle of the English has been to make the whole Indian nation subservient in every possible way.” In 1600, when the British East India Company was set up, Britain accounted for just 1.8 per cent of the world GDP, while India was contributing 23 percent. In 1940, Britain accounted for nearly 10 percent of the world GDP while India was reduced to 3 per cent…

All in all, Jayaraman’s sixth book is a remarkable work, well-researched and well-written and sincere to the core. There’s enough food for thought to last a long time.

(Published in The New Indian Express, Kochi, Thiruvananthapuram and Kozhikode)
at September 18, 2019