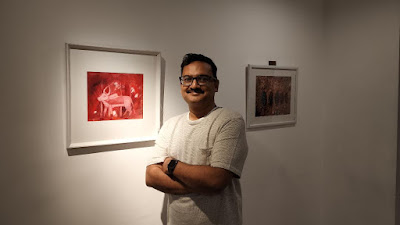 Anish Damodaran, of the Backwaters Collective on Metaphysics and Politics, talks about how we are still colonised by the West regarding how we think and act

When entrepreneur Anish Damodaran stood outside the Malayalam Mandiram building of the Sree Narayana Guru Society of Sri Lanka, at Colombo, he thought it looked like a mosque with a peaked top and vibrant yellow and green colours. But when he stepped inside it looked like a Christian chapel, with the high ceiling and wooden benches. But at one end, there was a statue of Sree Narayana Guru looking back benignly at him. (The Guru [1854-1928], as is well known, was a radical, who generated immense social change in Kerala and wrote extensively on philosophy as well as poems).

Anish had come, along with his father and a few friends for a visit in October, 2010. It was while there he learnt that the organisation had come up through an Act of Parliament. “In the field of education. Narayana Guru had started 42 night schools and libraries in Colombo,” says Anish. “Because of these schools, many people got educated. So the country was grateful to Guru.”

But Anish did not want a seminar which espoused only the ideas and thought processes of the Guru. “The biggest gift the Guru gave the people of Kerala was the idea of original thinking,” says Anish. “Can you think for yourself and thereafter, act for self and society? Thinking by itself was an act for him. We decided to get scholars from outside who could generate original ideas. That’s how we got people like [eminent social scientist] Prof. Ashish Nandy to come across.”

The seminar was a success. More than a thousand people attended. That became a trigger. A group was formed. It was called the Backwaters Collective on Metaphysics and Politics. And for the past several years, it has held an annual conference, at Kochi. The most recent one, which took place between July 12-15, was in association with the Kochi Biennale Foundation.

The Collective has a clear aim: to produce new ways of thinking. “That’s because there is a hegemony of knowledge by the West,” says Anish. “In a way, we are still captivated by their findings. So, we are blindly following then. The whole world is in thrall. We are always quoting Socrates and Plato. We should come up with Eastern or Indic concepts which can be used to resolve contemporary issues that the world faces.”

Then Anish asks a rhetorical question: Why hasn’t Sree Narayana Guru or [social reformer] Chattambi Swamikal been taken seriously by academicians? “There are no studies on them,” he says. “These are individuals who have transformed society. They have come up with ideas that can become universal.”

He says the Global South -- countries in Asia, Africa, Latin America and the Caribbean -- has to be proactive. “Our societies need to find solutions ourselves instead of looking for ideas from the West,” says Anish. “Prof Nandy says that knowledge should come from the slums. That means, it should come from the margins.”

Meanwhile, when he was told that most people are not interested in subjects like metaphysics and philosophy, Anish agreed. “Society is not reflective,” he says. “We live in a world where we accept Whatsapp messages, many of which are fake, without a critical filter.”

This lack of interest has not proved a deterrence. “It takes time to change society,” he says. “We have brought out two books which consists of our radical ideas.”

The first book, which contains a selection of papers from the first few conferences, was published by Oxford University Press under the title of ‘India and the Unthinkable: Backwaters Collective on Metaphysics and Politics 1’. The just-released Volume II is titled ‘India and Civilisational Futures’.

Finally, Anish has a plea. He wants youngsters to study humanities, philosophy, literature along with science and information technology. “Because everything is human,” he says. “Fundamentally, today, technology is dehumanising us. We are losing our human faculties, like our memory. How many phone numbers can we remember today? Twenty years ago, we remembered a lot more. How do we remain sensitive to each other and nature? We are not alive. That’s why young people should study the humanities. But it should not be standardised. The syllabus should consist of hybrid courses.”

Will young people and the universities listen to Anish’s plea is the moot question?

(Published in The New Indian Express, Kochi and Thiruvananthapuram)
at September 16, 2019