Chilling out at Kochi 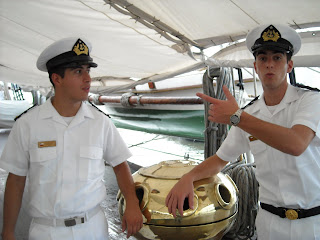 Sailors from the Chilean sail ship, Esmeralda, had an enjoyable experience in the city

Sailors Cristobal Luchinger, 21, and Braulio Garces, 23, from the Chilean navy ship, ‘Esmeralda’, went on a rowing expedition on a river near Kochi. They rowed for an hour and reached an island where there were a group of houses. The people saluted them, as they docked at the jetty.

“When we stepped on shore, we told the people we had been sailing for three days and had not eaten during this time,” says Cristobal. Immediately, a family welcomed them home and served the men a sumptuous lunch. A crowd of people had gathered outside.

“The people were kind and hospitable,” says Braulio. Soon, it was time to go. A grateful Cristobal leaned forward and gave a peck on the cheek to the woman of the house. The crowd let out a collective ‘Aaaah’ and looked shocked.

“I did not know we were not allowed to kiss women in Kerala,” says Cristobal, with a smile. “In Chile, we greet women by giving them a peck on the cheek.”

For most of the crew, their most stunning experience was seeing elephants. “In Chile, we only see elephants in a circus,” says Carlos Goody, 23. He says he went on a ride and felt nervous all the time.

The Esmeralda is a training ship and has a total of 345 sailors. It set sail on May 4 from Chile and arrived at Kochi last week for a couple of days. So far, it has touched ports in Ecuador, Trinidad and Tobago, Morocco, Spain, Croatia, Greece, Turkey, Israel, and Egypt, before it reached Kochi. Future points of call include South Africa and Argentina, before it will dock at Chile on December 7, after covering a distance of 45,000 kms.

“If the weather is pleasant, we use the sails and can get a top speed of 10 knots an hour,” says Cristobal. “This is a very economical way to travel, as we do not need to use fuel.”

However, if the weather is bad, the sails are brought down and the engines are switched on. “But there is not much difference in the speed,” he says. “The ship moves at 11 knots an hour.”

When they are at sea, the sailors, most of whom are in their early twenties, get up at 6 a.m., do exercises, have breakfast and attend classes from 9 to 12 p.m. “It is on basic stuff like how to stop a fire on a ship, and use a compass,” says Carlos. “We learn of methods to protect the environment and what our responsibilities will be when we become officers.”

At 12, there is a lunch break, following which there is a period of rest. Classes continue from 3 p.m. There are practical lessons on how to manouevre the ship and hoist the sails.

From 7 p.m. to midnight, it is leisure time again. “Some of us study,” says Braulio. “Others watch television or read newspapers, play cards or a popular dice game known as cacho.”

But it has not always been smooth sailing. “We had received several wireless messages from our home base warning us that pirates were attacking ships almost every day in the Gulf of Aden,” says Carlos. “We were very scared, since we are not a warship, just a training ship. Thankfully, nothing happened.”

Thereafter, most of the crew members looked forward to the time when the ship halted at ports. For all of them, seeing the Pyramids was the most fascinating experience. “It was unbelievable,” says Braulio.

In Casablanca, they saw the tallest mosque in the world: the Hassan 11 mosque, built at a cost of $800 million. “We also went to Tangiers and experienced temperatures of 50 degrees Centigrade for the first time,” says Carlos. “The Arabian headgear was very useful.”

For Cristobal, it was at Istanbul that he first experienced the concept of ‘bargaining’. “You can bring down the price of a product to a large extent,” he says. “The shopkeepers don’t give up. If we say, ‘No, thank you’, the salesmen would follow us out of the shop, trying to persuade us to change our minds. In Chile, prices are fixed for all items.”

So, what has been the learning experience of the trip so far? “By experiencing so many cultures, it has made me broad-minded,” says Cristobal. For Carlos, he was happy to develop a sense of camaraderie with his fellow sailors, all new to the profession, like him. Says Captain Victor Zanelli: “This training will strengthen their mind and spirit.”

But all the sailors had one singular experience. As Cristobal says, “The long absence from my family has enabled me to appreciate them all the more.”