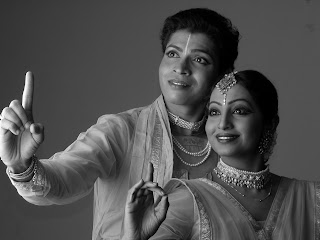 The couple, who are devoted to dance and to each other, gave a performance at Kochi recently

In November, 2004, Hari and Chethana had gone to Kuala Lumpur to do a dance performance. There, they met Swami Shantananda Saraswati, the founder-guru of the Temple of Fine Arts (TFA). Shantananda asked the couple to perform for him, but they were unable to do so, since they had to stick to a schedule fixed by the Indian Council for Cultural Relations.

On July 27, 2005, Shantananda passed away at the TFA centre at Coimbatore. A close associate of the Swamiji asked the duo whether they would perform during the aradhana ceremony and they agreed.

During the performance at Coimbatore, as they stared straight ahead, at the audience, they suddenly saw the physical form of Swamiji.

"He was wearing a khadi kurta and dhoti," says Hari. "We did not get scared. But we could see love streaming out from him. He was saying, 'Don't worry, I am here. Do it.'"

It was the turning point for the couple. "Before that vision, we looked at life in a materialistic way," says Chethana. "We were unable to connect with audiences. From that day onwards, we became enlightened. Now we try to make the divine force flow through us into the dance."

Hari says that, earlier, they would dance from the mind. Now they do it through the soul. "It was also the day when Chethana and I developed a deep connection," he says. "Earlier, we were working partners. Then we became emotionally involved with each other."

On February 8, 2008, the couple tied the knot. So what did Hari like in Chethana? "She is a mature person and has a lot of inner fire. She wanted to be somebody in life," he says.

Chethana says she admires Hari's creativity. "He has unique thoughts and ideas," she says. "And he has the talent to implement these ideas in a beautiful manner. Only a few people can do that. He is an extraordinary artist."

Hari and Chethana met in 1996, in Bangalore, during an advanced course in Bharat Natyam. Both had become dancers from their childhood, thanks to the encouragement given by their families. Later, they shifted to Kathak and, today, they have given over 500 performances in India the United Kingdom, Germany, France, Switzerland, Singapore, Thailand, Malaysia, Sri Lanka and the Middle East.

Asked about the differences between audiences outside and in India, Hari says, "Abroad, there is no art form which links the people directly to God. There, the body speaks, while in India, it is the mind and the soul. So, they are very attracted to our dance forms."

Chethana says that in India, audiences have a deep knowledge of the art forms. "Hence, to stand out, you have to be exceptional," she says.

Hari and Chethana had come to Kochi recently to perform at the ‘Rubber Asia’ seminar held at the Taj Residency, Kochi. They did two short dances, each, a mix of various folk dances. "For a corporate audience, you need to be precise," says Hari. "We tried to show the flavours of India in a short time."

Hari wore a green shirt and yellow trousers, while Chethana was resplendent in a green paavada and blouse, with a yellow scarf. The music had a peppy beat and Hari developed a connection with the audience. He shook his anklets and said, "Dintha dintha tha dintha," and the tutored audience responded with, "Tak, Tak Tak."

It is Kathak with a modern face. Says corporate trainer Lalitha Menon: "There was a lot of synergy. The music and the dance steps merged beautifully, because Hari and Chethana have a natural flow. It was a wonderful experience."

Magazine artist Sunil Pankaj also enjoyed their performance. "They were concentrating on getting a good rhythm," he says. "However, because of the short time allotted, they seem to be doing it very fast."

Chethana agrees and says they had made two capsules of five minutes duration. "Nowadays, when there is no time for anything, we have to give just enough, so that it can be digested easily," she says.

To give back something to dance, which has given them everything, Hari and Chethana established the Noopur Art Centre in Bangalore in 1996. "Our parents suggested that instead of starting something individually, we should do something together," says Chethana. Today, there are about 20 students at the centre.

Both want their students to portray beauty through dance. "Whenever a college student sees a Bharat Natyam dance, he gets bored," says Chethana. "We want to avoid that. We want to provide exciting music and choreography."

And, interestingly, the couple has a creative link with Kerala, too: they have done compositions based on the songs of Swati Tirunal.

"We have also choreographed dances from the Ramayana," says Hari. "Recently, we did a dance based on Urdu poet, Mirza Ghalib's Hazaaron Khwaishein aisi. There were seven dancers who show-cased the various aspects of the Mughal era."

The couple is on a unique creative and emotional journey…