"Writing is a form of prayer" 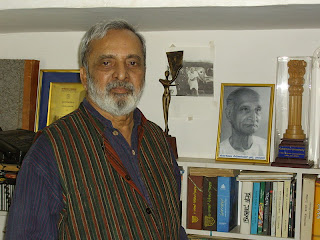 When one of Karnataka’s great writers, U.R. Anantha Murthy was a child, his mother had become seriously ill, following the delivery of a son. “We were living in a village where there were no proper facilities,” he says. “I prayed under a tree for her recovery. And she survived. Looking back, I know that God saved her life.”

As a child, Murthy had a favourite temple. It was a Shiva temple located on the banks of the Tunga river in Shimoga district in Karnataka. Since there was no electricity, a small lamp was lit in the evenings inside the shrine.

“When I looked intently at the flame, I was also able to see inside my soul,” says Murthy, a Jnanpith Award winner, who is on a brief visit to Kerala.

Murthy experiences the presence of God when he hears a bird sing a song on a tree. “Or when a bird looks at me, I feel I have made a connection with nature,” he says. “When you meet an old friend and it brings back the time we spent together years ago, it is a moment of ecstatic joy.”

At this moment, Murthy says, his heart prays to God. “But whenever the rational process dominates, I have problems with my faith,” he says. “Only when I am silenced by ecstasy or grief, then something mysterious opens out. Otherwise, my mind is that of a skeptic.”

Owing to this collision between rationality and belief, Murthy does not pray every day. “I don’t want to do it mechanically,” he says. “But when I begin writing, I empty myself of all opinions, goals, notions and prejudices. Then slowly, I get filled up with a mysterious power. So writing is a form of prayer for me.”

Listening to music is also a form of prayer. “I feel moved by the great bhajans of Kabir sung by Kumar Gandharva,” he says.

Despite this, he has been assailed by doubts. “If I was very sure that God exists, I will not rely on a bank balance,” he says. “Mahatma Gandhi once said, ‘Earlier, I believed that God is truth. Now I believe that Truth is God.’ What a sublime jump from one great idea to another.”

Nevertheless, the writer who uses his imagination so much has many visuals of God when he closes his eyes to meditate. “Since I am a Hindu, at any moment, my God may be a tree, a bird, a human being or Lord Hanuman. I also see the images of Lord Krishna, Shiva, and Lord Rama.”

When Murthy was young, he picturised Lord Rama on a famous film actor of that time. “Even now I am not free of that image,” he says. “Sometimes, I wonder whether I will ever be able to see the true image of God.”

When asked whether God is male or female, Murthy says, “Like Shiva, God is a hermaphrodite: half male and half female.”