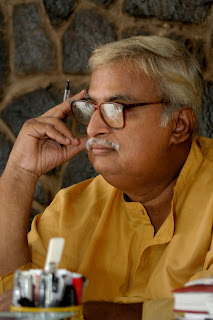 Scriptwriter John Paul’s book on the late actor Bharat Gopi analyses the impact of his work, and the complex nature of the brilliant artiste

It was six months after Bharat Gopi died -- on January 29, 2008 -- that scriptwriter John Paul felt the urge to write about his friend. “It seemed to me as if the soul of Gopi wanted me to do it,” he says. But when he began to work John Paul felt that he needed to do some research.

“Writing about a person who is alive is very different from chronicling a person’s life after he has died,” says John Paul. “I realised that I was writing for posterity. That meant I had to do a lot of research.”

John Paul had discussions with many people who knew Gopi well, including actors Madhu and Nedumudi Venu. Thereafter he started writing. At his Palarivattom flat, he would get up at 3 a.m. every day and work for four hours.

“What helped was that the book was being serialised in a Malayalam magazine, and hence I had to work hard to meet the deadlines,” he says. Four months later, the book was complete.

Called ‘Adayala Nakshatramayi Gopi’, and published by Green Books recently, the book is a voyage into the mind and soul of an actor. “It is my observations about Gopi, as well as insights from others, like director Adoor Gopalakrishnan,” says John Paul. “It is an inner and outer look of the actor. I try to explain his creativity.”

John Paul says that Gopi immersed himself so deeply into the character that he became that person. In ‘Sandhya Mayangum Neram’, a film by Bharatan, Gopi was playing an eccentric judge.

During the shoot, Bharathan, Gopi and John Paul were staying at the Prem Nazir cottage in Udaya Studio, at Alleppey. Instead of a staircase, there was a ramp.

“While we used the ramp, Gopi climbed over the railing and jumped down,” says John Paul. “Whenever we entered or left the cottage he always did this. Gopi lived his character 24 hours a day.”

As a result, Gopi did some remarkable roles and is regarded as one of India’s greatest actors. He won the National Award for Best Actor for his role of Sankarankutty in ‘Kodiyettam’. He also played memorable roles in ‘Yavanika’, ‘Palangal’, ‘Kattathe Kilikoodu’, ‘Panchavadi Palam’, ‘Ormakkayi’, ‘Adaminte Variyellu’ and ‘Chidambaram’.

However, this intensity took a physical toll. Once on the sets of a film of G. Aravindan, Gopi fainted. He was taken to a doctor who examined him and told him that he was suffering from low blood pressure.

The doctor said, “I have seen your films, and you take too much of the pain of the character inside you and that can have a physical toll. The character does not have a body, but you have.” The doctor suggested that Gopi should act without strain, the way Prem Nazir did. Gopi replied, “That is his style. My method is to be intense.”

John Paul says, “This is good for the art as well as the audience, but not for the actor. But Gopi could not do it in any other way.” In fact, this intense physical strain must have contributed to his paralytic stroke which he suffered in 1986, at the peak of his powers.

Gopi was immobilised for a long time. John Paul was a regular visitor. “He was angry that he could no longer play the roles he wanted,” he says. “He was also bitter that so few people from the film industry visited him.”

One reason was that Gopi was a prickly person. He had swift changes of mood, and could be rude and insulting. “So people stayed away,” says John Paul.

When John Paul would tell him about the films he was working on or a book he was reading, Gopi would shed tears. “His passion for acting had remained undimmed,” says John Paul. “He wanted to do more. He acted in a couple of films, but he told me he could not do his best.”

Gopi’s body had let him down. He had involuntary facial movements. And so, he was afraid to watch himself on screen. Despite this, Gopi’s colleagues were in admiration. Mohanlal told John Paul that when they acted together in Sathyan Anthikad’s blockbuster, ‘Rasathanthram’ (2006), the superstar was taken aback by the power in Gopi’s eyes.

“I miss him,” says John Paul. They had met on the sets of the film, ‘Palangal’, at Shoranur, where John Paul was the scriptwriter, and had clicked immediately.

“One evening we went to the bank of the Bharatapuzha and spoke non-stop on numerous subjects till dawn,” says John Paul. “Gopi’s deepest desire was to start an acting school and impart his knowledge to the next generation. But, unfortunately, God willed otherwise.”