Steering calmly through a turbulent sea 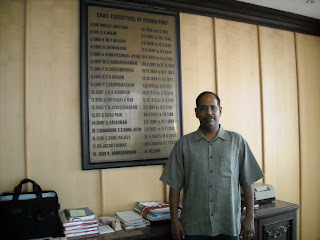 At 9 a.m., N. Ramachandran, the chairman of the Cochin Port Trust, arrives at his sixth floor office at Willingdon Island and begins a series of meetings. His visitors include shippers and businessmen.

Owing to the many difficult decisions he has taken on roads, bridges, and land acquisition, because of mega projects like the International Container Transhipment Terminal at Vallarpadom, and the LNG Gas Terminal, it has affected many people in the island towns of Mulavukad, Puthu Vypeen, and Vypeen.

So, MLAs and MPs, gram panchayat delegations, as well as local politicians will come to meet him. All of them have various grievances to resolve. Sometimes, tempers get frayed, but Ramachandran remains calm. “I try to solve the problems in an amicable manner,” he says.

Recently, owing to security reasons, fishermen were no longer allowed to ply in the waters, within 300m of the transshipment terminal, and were shooed away by the members of the Central Industrial Security Force. “Understandably, they are upset about it,” says Ramachandran.

Apart from pacifying public ire, there are review meetings of the various projects that are going on, while staff members meet him to complain about job-related problems. “I am accessible to all the employees, from the lowest to the highest,” says Ramachandran.

He works till 8 p.m., then goes home, to a bungalow nearby, and continues working for another hour. Ramachandran stays with his wife, Girija, a mathematics teacher at the Kendriya Vidyalaya, while their children, son, Unni, 29, and daughter, Lakshmi, 26, work as lawyers in Delhi and Chennai respectively. Following dinner, Ramachandran watches TV or reads a book. His latest is Amartya Sen’s ‘The Idea of Justice’.

“Reading is a form of relaxation for me,” he says. “When you are focused, your mind does not stray and become prone to stress. Reading also refreshes the mind and body.”

Ramachandran is less than seven months away from the end of an eventful five-year term. And he is happy that one of his biggest achievements has been the removal of organized extortion rackets at the port.

“When I was appointed as chairman, I saw trucks being stopped regularly by a union leader, accompanied by musclemen,” he says. “They were collecting ‘kettukoolli’.” In earlier times, trucks used to be covered with tarpaulin by workers. They were paid Rs 100 per truck and this was known as ‘kettukoolli’.

With the advent of containers that job became redundant. So, as compensation, a few union workers decided to charge Rs 100 from every truck. In a year they would collect Rs 3 crore.

Then the workers levied a charge of Rs 1500 on every truck that came to Willingdon Island. “Annually, about 8 lakh trucks come to the island,” says Ramachandran. “So, we are talking about Rs 120 crore. Then for every cargo, there was a charge per ton. It was a huge extortion racket that was taking place.”

With the support of the police, the district administration, the state government, and co-operative employees, the menace was ended in two years. “There was powerful opposition,” admits Ramachandran. “I received threats by phone and letter, but I ignored them.”

To modernize the operations of the port, Ramachandran, with the help of the Tata Consultancy Services, and his officers and staff, set up the Rs 13 crore Enterprise Resource Planning (ERP) programme.

“All operations, including the handling of the marine and cargo traffic, finance, procurements and sanctions are done through the ERP system,” he says. “For any action, there is a fixed method.”

For example if a ship has to come to the port, unless e-payment is made, the programme will not give permission for the vessel to pass through.

“Corruption and discretionary powers can be eliminated by having a transparent system,” says Ramachandran. “The ERP improves efficiency and accountability.”

The chairman has also installed the Vessel Traffic Management System. “The VTMS does an electronic scanning for a distance of 50 nautical miles,” he says. He points to a computer screen beside his desk and says, “Whenever a ship moves, I can see it here.”

He zooms closer with his mouse and reads out the name of a ship from Dubai. “This is for the safety of navigation, but there is also a security aspect,” he says.

At his office, Ramachandran is a beehive of activity. In between answering questions, he holds a board meeting, meets visitors, answers calls on his mobile and land line, and has a short interaction with his personal assistant. It is clear that he is enjoying the responsibility of meeting tough deadlines for mega projects.

Ramachandran says his biggest achievement will be when the Rs 2118 crore project at Vallarpadam starts functioning in June. “I will leave with a deep sense of satisfaction,” he says.

(This column traces the daily life of leading personalities)