The dark side of society 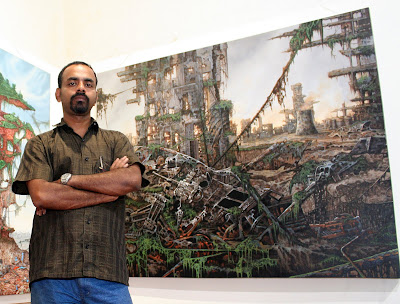 At the Domain-0 art exhibition, senior artistes portray the after-effects of war, as well as the impact of development on nature

When artist C.B. Bahuleyan switches on the TV and watches international channels like the BBC, he sees several images of conflicts around the world. It triggered off many memories for him. In 1990, he was in Kuwait when Iraq overran the country. And he saw the effects of that war at close quarters. All these insights has been poured into his acrylic on canvas, ‘Camouflage’.

It is painted in a forbidding grey. At the front, there are the remnants of a crashed Apache helicopter. If you peer closely, you can also see a rusted tank. Bombed-out buildings are there in the background, but, at one side, there is an unusual image: the dome of a nuclear reactor. “Yes, this is the Fukushima nuclear reactor in Japan,” he says. Meanwhile, weeds and grass can be seen growing through the wreckage and making a so-called camouflage.

“There is so much of destruction in our lives,” he says. “And the painting is timely, what with the possible danger to the Mullaperiyar Dam.”

K. Narayanankutty is also looking at life in a bleak manner. His painting of a mangrove forest shows it being devastated, with the roots exposed, and there is a middle area that looks like a desert, with the mud cracked in several places. At the distance are the multi-storeyed buildings that one sees in all the cities of the world.

The most unusual aspect is a longish white object in the middle. One is not clear what it is, till Narayanankutty gives a tip: look at the image from the side of the painting. And suddenly it becomes clear: it is a human skull. Narayanankutty is candid enough to say that he had borrowed the idea from German artist Holbein. The painting is titled, ‘Notes from the Underground’. “It is a stance against rampant development,” he says. “If you look at our history, man is always exploiting and destroying nature.”

Santhoshlal P. M. has done an unusual oil painting. It shows a blue enclosure, with high walls placed on top of what seems to be a paddy field. From the blue sky above, which has numerous clouds, there are white strings that link it to the enclosure. So, what is it symbolic of? It is very difficult to figure out, till Santoshlal says, “It is the number zero -- India ’s contribution to the world and it rests on a field of Roman numerals,” he says. “This is my imaginative look at this great achievement by Indian mathematicians.”

Meanwhile, T.P. Premjee's series is called 'Animal Farm', in a direct allusion to George Orwell's classic book. In one oil painting, there are numerous brown pigs, done in a realistic style, which fill up the canvas. “The pigs resemble people,” he says. “There are too many of us, which causes tension, and fights.” Another work has what seems to be enlarged beans. “It could be fruits or a bomb, or even a large penis.” Finally, there are paintings by K. Sudheesh.

For the visitors, Bahuleyan's 'Camouflage' is the one which catches the eye. “I like the mood in it,” says Winston David, a photographer. Art lover Geeta Mathew says, “Bahuleyan explores many ideas, although destruction seems to be the dominant theme.”