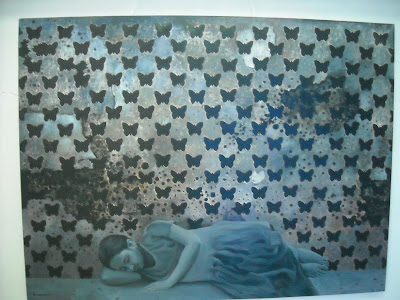 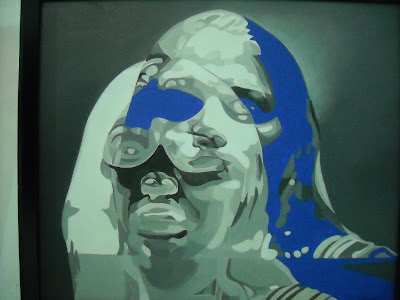 Photos: 'The sound of firing' by N. Balamurali Krishnan and O. Sundar's 'Two Faces of Women'

When N. Balamurali Krishna would go to film festivals, he enjoyed seeing the movies of Palestinian and Iranian directors. “Frequently, I would be touched by the plight of children in these societies,” he says. “They are the victims of random violence, wars, and terrorism.”

And it is these images that have inspired him to do an acrylic on canvas, called 'Sound of firing', which catches the eye at the annual exhibition at the Bindhi Art Gallery, Kochi. It shows a young girl, wearing what seems to be a paavada and blouse, lying on a ledge, with her head resting on her right arm and in restful sleep.

Just behind her is a cement grille, which has numerous butterflies, designed in such a way that you can look through them to the outside. At certain sections, there are yellowish splotches, the result of gunfire. So while she is sleeping, there is darkness outside and conflicts are going on. “This is part of a series called 'Portrait of grilled eyes',” he says. To the viewer, there is an arresting aspect, because of the clear, simple strokes, and the sense of darkness that it conveys.

O. Sundar’s acrylic on canvas, ‘Two Faces of Women’, will have a resonance with men. ‘Only two faces,’ some men might think. ‘A woman has so many facets: straight-faced liars, great actresses, so vain about their looks, vicious, spiteful, jealous, perfectly capable of cool sexual betrayals, and endlessly secretive. And not to forget their sublime qualities: of kindness, love, great motherly instincts, sensitive, beautiful, funny, and a rock in times of crisis. No wonder women drive men to distraction, and even to madness.’

Done in a monochrome black and white, with a dab of blue, it gives a three dimensional effect. “I wanted to show the positive and negative sides of women,” says Sundar. “They are more complicated than men and have a lot of hidden aspects.”

Bindhi Rajagopal, in whose gallery the show is being held, has done an image of a nest, but it hangs by a single thread on an iron rod on the terrace of the building. It clearly indicates the fragility of the nest. At the distance, the congested city can be seen.

Right at the side, near the bottom of the nest, there is a tiny sparrow, its legs entwined around another cement rod, with a piece of straw in its mouth, still in the process of giving the finishing touches. It is a telling image of the state of Kochi, where rampant construction is destroying all traces of Nature. “Even birds are adjusting to the changes and building nests in unusual places,” says Bindhi.

Meanwhile, the Chennai-based Razia Tony’s portrait, 'Varsha', shows a woman with a bare back, looking towards the viewer. At the background, there are forests, while at the bottom of the painting are fresh, white flowers. An acrylic on canvas, it is an evocation of the rainy season. “Varsha represents nature,” says Razia. “I want to show the changing seasons.” Despite being painted in a smudged style, in blues and greens, the eyes of the woman hold you in an unblinking gaze.

Other paintings include those by veterans like C.N. Karunakaran, Rajan M. Krishnan, and Kaladharan, established artistes like Hochimin, Rathidevi, R. Venu, and Satyapal, and youngsters like Nimmy Melvin.