A mix of the sublime and the furious 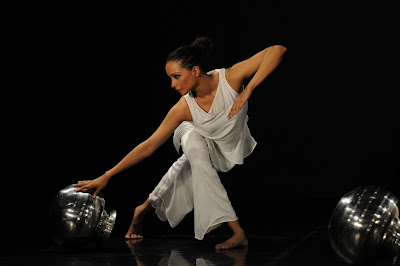 Artistic Director Jayachandran Palazhy of the Bangalore-based Attakallari Centre for Movement Arts steps on the stage at the Fine Arts Hall in Kochi on a Saturday evening. It is the start of ‘MeiDhwani (Echoes of the Body), a contemporary dance production.

Jayachandran is wearing a white tunic and loose white cotton trousers. He sits on the top of a gleaming steel pot, head resting on his hands, looking worried. He stands up and twirls around. Then he stretches out on the ground, his hands reaching out for something, a look of suffering on his face.

Soon, three female dancers – Diya Naidu, Hemabharathy Palani, and Keya Ann D'Souza – wearing white skirts, slit to the waist, with their hair tied up in a top knot join Jayachandran. They also swirl around, pirouetting, like in a ballet, and making powerful leaps and turns. They pick up the steel pots and dance around with it. Then they lie down and balance it between their legs. They get up and sit on top and do leg movements.

"The pots represent feminine energy,” says Jayachandran. And later when male dancers light lamps and place them on top of cylindrical metal stands, Jayachandran says, “Fire acts as a metaphor for male energy, and the destructive power within oneself.”

Indeed, when the male dancers – Ajeesh K B, Denny Paul, Lalit Khatana, Parth Bharadwaj, and Sumesh V M – appear on the scene, they swivel around with great speed, they jump up and dive to the floor. They go around the girls and in between them. They run from one side of the stage to the other, and, sometimes, they hop on their toes. All this is accompanied by the strange, hypnotic, electro-acoustic music of Israeli musicians, Patrick Sebag and Yotam Agam. “It has a Middle East flavour, but also has Indian melodies embedded in it,” says Jayachandran.

The most enthralling section is when Jayachandran does a duet with Hemabharathi, when they flirt and smile and hug each other. At one moment, he lifts her up and she returns the compliment, with the sexual chemistry clearly evident. It is a soothing segment in a programme that looks at the bleak side of life.

“I was concerned about the recent worldwide economic turbulence, as well as the unrest in the Middle East, Africa, and elsewhere,” says Jayachandran. “In India we are going through a rapid, unplanned development and urbanisation. In cities like Bangalore or Mumbai or Delhi, in the time you blink your eyes, a new shopping mall comes up. If you map these changes, through dance, you can get the pulse of contemporary society.”

And, undoubtedly, the dance is mesmerizing and gripping, the sheer skill on display, a feast for the eyes and a balm for troubled souls. The movements are so sharp and energetic that, within minutes, beads of perspiration can be seen on the foreheads of the dancers, while hurried breathing emanates through clenched teeth.

But there are times when the tempo is so languid that there is time to observe a tattoo -- a star, as well as a creeper -- on the left ankle of Diya. In short, it was a mix of the sublime and the furious

And it is clear that a lot of hard work has gone into the production. “It takes about six months to get a dance ready,” says Jayachandran. “There is a lot of creative exchange and training between the dancers and myself. Then I have to work with the music composers, costume and light designers, to add to the visual impact.”

Yes, the one-hour programme had a powerful visual and emotional impact. To know more, check out www.attakkalari.org. Segments can also be seen on You Tube.