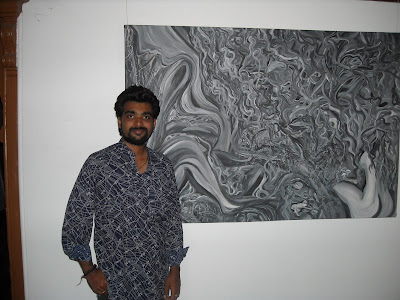 Artist Vipin K. Nair focuses on thoughts that exists in one’s mind and the miracle of nature

Photo: Vipin K. Nair standing next to 'Freedom from roots'

One day, when Vipin K. Nair was eight years old, the class finished early. Whenever that happened his mother told him he should wait under the huge tree by the side of the road near the Shree Dharma Paripalana Yogam school at Palluruthy where he studied.

But while he was waiting, he suddenly felt sleepy. So, he went and lay down on the thick grass near the tree. Unfortunately, he could not be seen from the road. Soon, his parents and neighbours began to search frantically for him. At 6 p.m., Vipin got up and came to the road. It was getting dark; he began crying. But a neighbour who had gone to the school to do a check saw him and finally brought him home.

It was this memory that was a trigger for Vipin’s acrylic on canvas, ‘Freedom from roots’. Done in grey and black, it shows a huge overhanging tree with thick roots and foliage. At the bottom lies a boy, who is in a deep sleep, his right leg stretched out. In the undergrowth, a few mushrooms can be seen. There are roots that look like snakes.

If you step back, you can detect a face: cold eyes, a long nose, and a baleful grin. On the left is a woman, sitting with an upraised right leg and her long hair is flowing out onto the foliage. On the opposite side is another woman, her bare buttocks facing the viewer, with a side view of a protruding breast.

“The reason why I have shown the women is because they are motherly and offer protection and shade to those around them, including their husbands and children,” says Vipin. “That is the same function of the huge tree, which offers a home to so many small insects, apart from man.”

Nature has been the theme of many paintings. In one acrylic on canvas there are red-winged beetles moving around on green leaves and plants. Vipin has also drawn a volcano, before it has erupted, and has put in several embedded images. So there is a mountaintop that looks like two eyes staring back at you. The vent of the volcano gives the impression of it being a large eye or the entrance to a cave.

“Yes, I like to put several clues in a drawing,” says Vipin. “It is not just a volcano. There are people in it, and different moods have been expressed.”

So, in that sense, his paintings, a total of 16, even though they are abstract, can still be decoded with ease. He has also done a few paintings, which is a physical expression of thoughts. So there are lines which go left and right, up and down, some blood-red in colour, indicating the chaotic mind of modern man.

“I did this series on nature and the mind, because both are remarkable,” he says. “I would call them miracles of life. Nature keeps changing all the time, while the human mind, if its power is properly harnessed, can achieve anything.”

This is Vipin’s fourth solo exhibition. A graphic designer by day, he works late into the night on his paintings. “I am self-taught, but painting has been my passion for many years,” he says.