Nothing ‘Ordinary’ about this debut 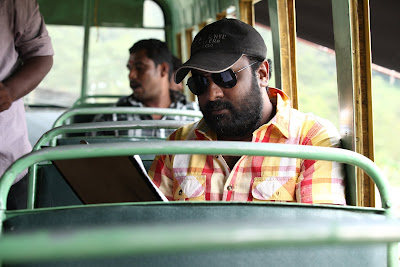 On the morning of the release of my debut film, ‘Ordinary’, I felt an unbearable tension within me. My mind had gone blank. What was going to be the fate of my film at the box office? But I told my wife, “I don’t think I have made a bad movie.”

At 10.20 a.m., I received a call from the film’s writer, Nishad K. Koya, during the interval of the morning show at the Cinemax theatre at Kochi. He said, “There has been a superb reaction among the audience. The film is going to do well.” Thereafter, there were congratulatory calls and messages on my mobile from friends, acquaintances, and industry colleagues. Very soon, the first review appeared on the Internet: ‘Good movie’.

At noon, I stepped into the Saritha theatre. My legs were trembling. The film began and what was most amazing was how much I enjoyed watching my own work. There were laughs and claps and whistles. I felt an enormous happiness within me.

During the interval, I stepped out to have a cigarette. A group of youngsters approached me and said, “Are you the director?” I was surprised that they had recognized me, and looked puzzled. One of them said, “We could guess by seeing the tension on your face. Don’t worry, it is a good movie.”

The film, ‘Ordinary’ is about an ordinary KSRTC [Kerala State Road Transport Corporation] bus which travels from Pathanamthitta to the remote mountainous village of Gavi once every day.

The story detailed the relationship that the bus driver, played by Biju Menon, and conductor (Kunchacko Boban) have with the passengers, as well as the people in the village. The first half has several humourous episodes, but it turns serious after the interval, with a murder taking place.

To me, the most amazing character was the bus. It was a 20-year-old vehicle, and heading for the scrap heap. We painted it in KSRTC colours. I was always tense about whether the bus would break down or not. But it performed perfectly, even when it got stuck once, between two trees. But the moment I announced, ‘Pack up’, at the end of the 63-day shoot, the bus died on us. It did not start again. It seemed to me that it did this last job with all its heart and soul.

'Ordinary' is a superhit, and a dream debut for me. I have realised that for a film to do well, you need a solid script. It took me four and a half years to get it ready. There is a stronger chance for success when the story is clear in your mind, before the shooting begins.

I have to thank my mentor [senior director] Kamal Sir for the 11 years I spent under him. He taught me sincerity, passion, dedication, and a positive attitude which is needed to surmount obstacles, as well as deal with artistes. There is no use of shouting and screaming, if you want to get the best work out of them. An actor might give a bad shot, but it is important not to criticize him immediately. Instead, you could ask if it is okay to do a re-take. As for my future plans, I am about to start work on a new script. I will be flying off to Dubai, where I have an apartment, to work in peace.