“Rimi is a spontaneous person” 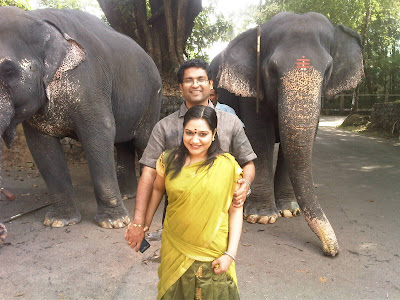 When businessman Royce Kizhakoodan met singer Rimy Tomy, at her home in Palai, he got a shock. She was less plump than when he had seen her on TV during the ‘Silver Storm Safari’ programme where Rimi was an anchor. “She was also fairer and prettier,” says Royce. It was an arranged marriage and they tied the knot on April 27, 2008.

Nearly four years later, at his ‘Good Earth’ apartment in Kochi, Royce is all alone. Rimi has gone off for a singing programme in Dubai. “Earlier, I would travel with her, but I stopped because it was affecting my business,” says Royce, who deals in glass and construction materials. He is also a car rallyist and came third in the 1600cc category at the national championships in 2008.

Asked to name her positive qualities, Royce says, “Rimi is a very good cook. She reads recipes and makes all types of wonderful dishes. She is also child-like and has a lot of positive energy. And perhaps her greatest quality is her spontaneity.”

Royce remembered the conversation with Rimi in Dubai in January just before the Ujjala Asianet Film Awards 2012 function. “Rimi told me she wanted to have an interaction with her idol [superstar] Shah Rukh Khan, on stage, but it was not there in the programme,” he says. Royce suggested that she talk to the organisers, but Rimi replied that it was too late to suggest changes.

In the event, when she was about to take the mike from Shah Rukh Khan to start the next segment, she suddenly says, in passable Hindi, “I love you Shah Rukh. I want to sing two lines for you. I have seen ‘Kuch Kuch Hota Hai’ more than 10 times.”

Shah Rukh Khan listened attentively. “You must be wondering how such a fat person is working in the film industry,” says Rimi. “But I am not an actress. I am just a small singer.” Then she sang the first lines of ‘Tum Paas Aaye’ from ‘Kuck Kuch Hota Hai’.

Shah Rukh moved with her in a waltz-type dance, and then in a smooth movement, he picked her up and held Rimi in his arms, as she continued to sing. In the audience, actors Mammootty, Mohanlal, Dileep, Asin, and Vidya Balan, among others, were grinning. As for Kavya Madhavan she has opened her mouth in surprise and wonder.

Shah Rukh put Rimi back to the floor, kissed the back of her hand, and says, “You are the lightest and the most beautiful person to sing the song.” An excited Rimi turned to the audience and shouted in Malayalam, “Royce, I am leaving!”

Says a smiling Royce: “That’s Rimi for you: spontaneous and determined at the same time. If she decides to do anything, she will do it.”

Meanwhile, regarding her drawbacks, Royce says that Rimi has to learn to be diplomatic. “That is one reason why on her programmes she has numerous fans, but there are also some people who don’t like her,” he says. Not surprisingly, Rimi is sensitive to criticism. “She gets upset if people talk ill of her,” says Royce. “But I tell Rimi that there are plus and minus points about being well known. And you have to accept both.”

Royce is also coming to terms with being married to a person in the public spotlight. “Earlier, I could go to a wayside shop and have a glass of lime juice,” he says. “Now if I do that, people will point at me and whisper to each other, ‘Isn’t that Rimi Tomy’s husband?’”

A month ago, Royce was travelling on a sleeper berth from Thiruvananthapuram to Kochi. When he got up from a nap, he saw a nun, along with a family sitting opposite him. They were staring at him. “I realized that they had recognized me,” he says. Finally, the nun plucked up the courage to ask whether he is Rimi Tomy’s husband. When Royce nodded, the nun said, “All of us could never imagine that you would be travelling in a sleeper coach. You should be in an air-conditioned coach.”

Royce now says, “To travel in a sleeper or an air-conditioned coach is my choice. Where does it say that if you become well known, you cannot travel by ordinary bus or train?”

Despite all the travails, the couple does have a good time. “Since Rimi is crazy about films, we watch a lot of movies at the Gold Souk or the Oberon Mall,” says Royce. “We also spent a wonderful week at the Botswana National Park. It is a memory that will remain with me forever.”