Lord Ganesha in all his magnificence! 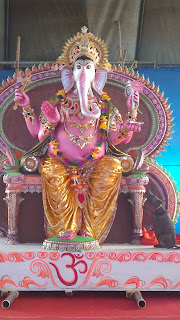 At 5 p.m. on a recent Thursday evening, brothers Tapan and Jyotirmoy Jana are busy spraying paint on a pot-bellied idol with a long trunk and wide flapping ears, and small tusks. The idol of Lord Ganesha is resting on a platform in the garden of businessman Bharat Rasiklal Shah’s house in Mattancherry. This is the first time that an idol, of a height of 10 ft., has been made. And the men responsible – Tapan and Jyotirmoy – have come all the way from Midnapore in West Bengal to make it.

Since they could not get the particular alluvium mud that is needed to make the idol, they brought 50 kgs in large sacks by train. But before they place the mud, first a bamboo structure is made. This is then wrapped in grass and tied firmly with ropes. Thereafter, the local mud is applied, before there is a final coat of Bengal mud.

Tapan has been making idols for the past 25 years. So far, he has made more than 10,000. He learnt the skill from his own father in the village. But a commission to make Ganesha idols is rare, simply because Bengalis do not worship Ganesha, like the Marathis. “Most of the time I make Durga, Kali, Lakshmi and Saraswati idols,” he says. “But when I am called to Orissa, it is usually to make Ganesha statues.”

Not surprisingly, there is a lot of hard work and effort involved. “Even though I love making statues, there are bad moments,” he says.

Many a time, despite adequate protection, there will be a sudden gust of wind which will fling the tarpaulin away and the idol gets damaged in the rain. “The people who have commissioned the work get very angry,” says Tapan. “Sometimes, it is very close to the festival inauguration. We are forced to make a new one, by working day and night, but we are not compensated for the damage to the old one. So we lose a lot of money.”

But in Mattacherry there are no such fears. Even though it is the rainy season, the statue is safely ensconced in a makeshift pandal, and nearing completion. The members of the Cochin Ganesh Mandal stand in the garden, talking to each other, as they eagerly watch Jyotirmoy give the finishing touches. Meanwhile, Tapan shows the headgear, arm bands, rings and necklaces which the idol will wear. “These have been made by my daughter, Shitilekha,” says Tapan. His daughter and wife have also come along to help Tapan in his assignment in Kochi.

It is not the only idol he is making. Tapan has received a commission from the Bengali community in Kochi to make three Durga idols and one of Vishwakarma. Thereafter, he will go to Thrivananthapuram to make two statues there. “I will be leaving only at the end of October,” says Tapan. Incidentally, he is on his fourth visit to Kerala. He first came in 2004.

But despite this familiarity, Tapan and his family are trying to get used to life in Kochi. “In West Bengal, we use mustard oil with our food, while in Kerala it is coconut or palmolein oil,” says Tapan. “So, we cook our own food, instead of eating from hotels.” But in Mattancherry, they befriended Dilip, an Oriya, who works as a security guard at a nearby office. “He makes the food in the way we like,” says Tapan.

Of course, the biggest problem is the language. “Many times, we ask for something and get something different,” says Tapan, with a smile.

Despite the constraints Tapan and Jyotirmoy finished the idol on time. One week later, it has been placed at the Haathi Talav Grounds on Gujarati street. “There are hundreds of smaller Ganeshas which have been brought from places like Mumbai and Ahmedabad,” says Bharat. All this is for the Ganeshotsav 2012 organised by the 3000-strong Gujarati community. It will be inaugurated today (September 19) by Swami Purnamritananda Puri, general secretary of the Mata Amrithanandamayi Math. On September 29, when the festival concludes, Tapan’s Lord Ganesha, along with the other idols, will be immersed in the sea at the beach of Fort Kochi. At that moment, all the Gujaratis will chant, “Ganapati Bappa Moriya Pudhchya Varshi Laukar ya (Oh Ganapati My Lord return next year)”.

(The New Indian Express, Kochi and Thiruvananthapuram)
at September 20, 2012