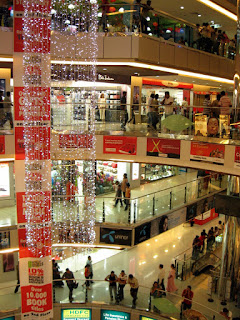 During a crowded weekend, an employee of Graffiti Clothing at the Oberon Mall, Kochi, just about managed to see a 35-year-old woman slip in a folded silk garment into her own saree. He confronted her. She denied it. A group of salesgirls discreetly took her to the store room. On a closer inspection, it was discovered that she was wearing a pyjama under her saree. There were other items from neighbouring shops.

As they were deciding on whether to call the police, there was a call on the landline. “The associates of the thief said that a woman had come into the shop and has gone missing, so they would have to call the police,” says Aftab Kareem, the owner of Graffiti. “It was a smart move. They could easily charge us for sexual harassment. So we let the woman go.”

These are professional thieves, who go from shop to shop, in the malls, especially on weekends and festive seasons to steal goods. Most of the time they get away, and even if they are caught, the danger of the woman accusing the male staff of sexual harassment is ever present. “But now I have made it mandatory that only female employees should deal with woman thieves,” says Aftab.

The thieves are smart. “Whenever we replay the tape of the surveillance cameras, their faces cannot be seen,” says Aftab. “They know their precise location. So they stand looking away.”

Apart from these skillful robbers, there are amateur thieves, in the 18-30 year age group. “They do it because they think, ‘Why pay for it when I can get it for free?’” says Aftab. “Boys will take a couple of shirts and go inside the trial room. They will put the new shirt on and over it, they will wear their original shirt. And then they will walk out.”

But some have unlucky experiences. One young man put a new shirt, and forgot that his own shirt was a see-through. The store manager was at the billing counter. The salesman whispered to him about the hidden shirt.

The manager gestured to him, and when the youth arrived at the counter, he said, “Are you through?”

“I am making out a bill for you,” said the manager.

“For what you are wearing under your shirt,” said the manager.

The youth quietly paid the money and went away.

“Our aim was not to humiliate him in public,” says Aftab. “He was not a career thief. He was someone who was taking a chance.”

Meanwhile, what has amazed Aparna Menon, the owner of a shoe and apparel shop, was how young the thieves can be. “Rajesh was only 11 years old,” she says. “He used to come to the store regularly and pick up stuff with his parents.”

Since he lived near the mall, he would come alone sometimes. “He was very friendly with the staff,” says Aparna. “But the moment other customers came and the staff would get busy, he would put caps and balls in a bag and quietly walk away. When we tracked the movements on the close-circuit TV we understood what he was doing.”

The video was shown to the affluent parents, who were, understandably, shocked. “Rajesh's father literally cried in front of the sales staff,” says Aparna. “I think it was a thrill for Rajesh. He does not need all these things. He already has enough.”

Aparna says that most of the thefts in her shop has been done by youngsters. “We don't complain to the police, as we do not want to spoil their lives,” she says. “We will warn the boy and ask him to buy the product. Even if he does not want it, he has to take it. That is the punishment.”

Young women try a bit of thieving, also. “They tend to steal cosmetics or ladies accessories,” says MT Raghu, a store manager in a shop at a mall, near Vytilla. “They will put the products in their handbags. When the anti-theft tag gives a beep, while they are passing through the exit, we will just ask them to pay for it. Then we make them write a confession letter stating that they had taken this. All this will be done quietly.”

But the most astonishing theft in Raghu's store was when a 25-year-old youth coolly placed a 14” LCD, costing Rs 15,000, under his large jacket and walked away. “Nobody noticed anything,” says Raghu. “The theft was discovered days later when we replayed the surveillance tape.”

In most shops, there are about three to five thefts or attempted ones every month. And they can be divided into three types: internal, external and break-ins. “The last one is rare,” says Raghu. “About 80 per cent of the thefts are done by customers. But what we fear the most are internal thefts.”

That is when an employee colludes with an outsider. “He will ask the friends to come and do shopping,” says Raghu. “At the counter, he can remove the magnetic anti-theft tag, and pass the clothes without doing the billing. Or he will put a Rs 200 tag for a Rs 1500 jeans.” To avoid this, the store does a background check on the tellers, and places surveillance cameras at the cash counters.

What has made things difficult for the retailers is that thieves have found their way around the anti-theft tags. “They will use a blade to take it off,” says Aftab. “Since it is a magnetic tag, there is something called a magnetic detacher, which costs Rs 2000. The professional thieves use this.”

Most retailers in the malls accept that such thefts take place all the time. Says Aparna, “The annual industry loss is 5 per cent of the stock. It becomes worrying when it goes above that.”