Straight From The Heart 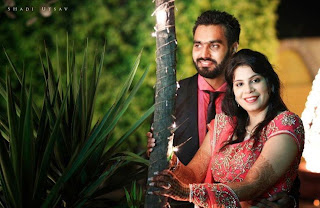 Ravinder Singh is one of the biggest mass-market selling authors in India now. His sincere and deeply-felt childhood memoir, 'Like It Happened Yesterday', has just been released

Photo: Ravinder Singh with his wife Khushboo on their wedding day

At 4 a.m., on February 9, 2007, Khushi was in a happy mood. She had just completed her last day of work at the IT company that she worked for, in Noida, and was returning home in a cab. On Valentine’s Day, February 14, she would be getting engaged to IT professional Ravinder Singh. They had met through the matrimonial website, shaadi.com., and had been going steady for a few months.

While she was sunk in these pleasant thoughts, a truck came and hit the cab at full speed. The car was damaged beyond repair. A greviously wounded Khushi was rushed to the Intensive Care Unit of Escorts hospital, Faridabad, and later, to Apollo, Delhi, where she remained for a fortnight.

“During that time, I was telling God that this is the time I needed Him badly,” says Ravinder. Unfortunately, God did not hear his pleas and Khushi died of her injuries. Not surprisingly, Ravinder lost his faith and walked away from God.
Three months passed. Ravinder was unable to come to terms with what had happened. “I could feel this pressure growing inside me,” he says. “I wanted to do something. At times, I would cry at night.”

During this period, he was living with a friend, in Bhubaneshwar, who happened to be reading a book. Ravinder flipped a few pages, and decided that he would try some writing himself.

"The idea was to share my grief,” he says.

Ravinder started writing... and never stopped. The end result was a book called ‘I Too Had a Love Story’, which took the youngsters in the country by storm, and sold lakhs of copies.
Ravinder is perceptive about the success of his first book. “Most probably it was because of the honesty with which it was written,” he says. “Readers tell me that they felt an emotional connect with the hero. They also felt his pain. My fans told me they don't read my books because of my literary skills or high standard of English. They like my writing because it is from the heart.”

His next two books – ‘Can Love Happen Twice?’ and ‘Love Stories that Touched my Heart (an anthology) did equally well.

His readership, which was initially young, has now moved to all age groups. “Lots of kids, who read my books, have made their parents read it,” says Ravinder. “I have received e-mails from grandmothers who told me that in this present world, a guy showing a commitment to somebody who is no longer alive touches them a lot. That pushed them to read the book.”

Amazingly, it has healed marital rifts. A woman, Snehalata Rajeev (name changed), said her husband, Surya, had gifted her, ‘I Too Had A Love Story’, but she never read it. She was having tensions with him, and was contemplating divorce. That was when a friend told her to read Ravinder’s book. Snehalata told her friend, “What is the connection between reading this book and saving my marriage?”

But eventually she read the book. “After I finished it, I imagined what if my better half was no more in this world,” says Snehalata. “You can never ever get in touch with him ever. By thinking about divorce, was I taking the right decision?” In the end, Snehalatha remained with Surya. And a gratified Ravinder says, “This is the best compliment that I have received. It is beyond the price of the book.”

Like Snehalatha, the fan base keeps growing. When Ravinder set up an e-mail id, itoohadalovestory@gmail.com, he received more than one lakh mails. He also has 6 lakh fans and readers on Facebook.

One woman who read his first book was the Delhi-based Khushboo Chauhan. “She was probably crying after she read it,” says Ravinder. Thereafter, she went to the Bangla Sahib gurudwara and prayed to God. “This guy deserves a nice girl,” she said. “So please, God, find him a nice girl.” And Khushboo probably could not have imagined that it would be she who would be the 'nice girl', who got married to Ravinder, on September, 23, 2012.

Ravinder was in Kochi recently to promote his latest book, ‘Like It Happened
Yesterday’. These are touching stories from his childhood, again written with intense feeling and sincerity. Asked why the move from romance to sentimental memories, Ravinder says, “I wanted to relive those childhood days one more time. Practically I can't, so theoretically I did.”

Observing the excited reaction, among the audience, comprising many youngsters, there is a strong likelihood that ‘Like It Happened Yesterday’ is also going to be a mega best-seller.

The son of a Sikh priest, Ravinder was born at Kolkata, brought up in a small town, Burla, in Orissa, did his engineering studies from Bidar, Karnataka and MBA from Hyderabad, and began his career in the IT industry from Pune.
From IT industry to best-selling writer is a leap that Ravinder would never have dreamt he would be doing one day.