Of Body and Sole 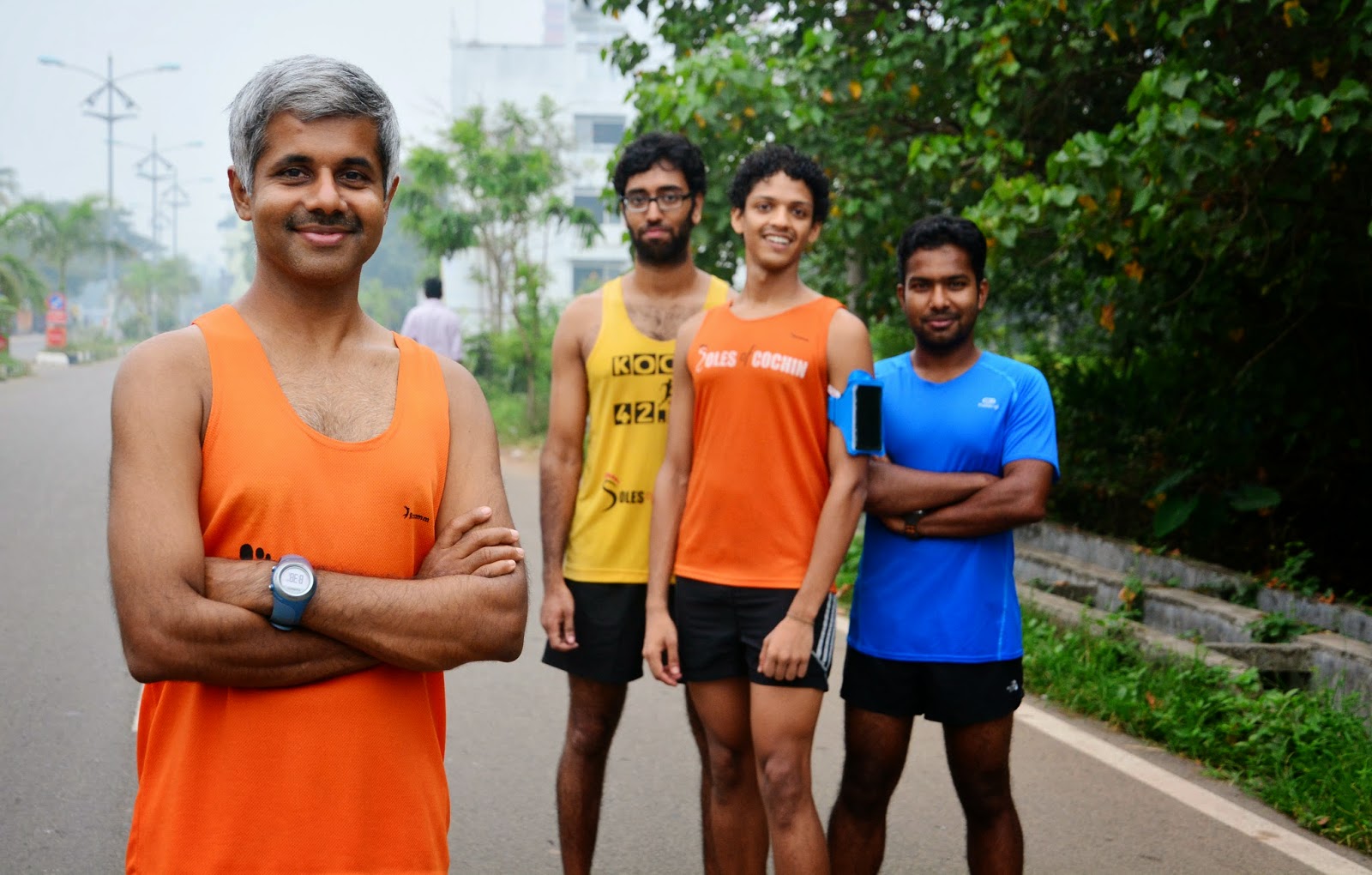 Last year, IT Professional Ramesh Kanjilimadhom started the Soles running club, along with a few friends. Within months they had 1200 members and the group successfully conducted the Spice Coast Marathon recently

Photo: Ramesh Kanjilimadhom and members of the Soles running club.

At 5.30 a.m. on August 10, 2012, IT professional Ramesh Kanjilimadhom set out on a run from his apartment at Kochi. It was raining heavily and there was darkness all around, except for the street lights.

Ramesh was wearing a white singlet and blue shorts and running barefoot. Suddenly, from a bylane, a car appeared. Before Ramesh could realise what was happening he had been hit on his left side and fell down. The panicky driver sped away.

When Ramesh sat up he saw that his leg was broken. “I held my leg and tried to stand up, but could not do so,” he says. A desperate Ramesh tried to wave down a few people in their cars, but nobody stopped. But, as always, there is a Good Samaritan. In this case, it was Rockey Roger, who had just finished his night shift at an IT firm and was on his way home. Rockey rushed Ramesh to a nearby hospital.

When Ramesh recounted this incident to his friends – Renjith Mohan Kumar, Thomas Paulose, Mathew Mapram, Paul Mathew, Manoj Kuriakose, and Prasanna Kumar – they urged him to start a running club. “When we run in a group, safety is a given for the individual,” says Prasanna.

Following discussions, it was Manoj Kuriakose who came up with the club's name: ‘Soles’. “What do runners run with?” says Manoj. “With our soles. It is about our souls, too.”

Ramesh’s wife, Seema, who is also a runner, says, “We felt it is important to spread the habit of running in Kerala, where so many people suffer from diabetes and other health problems.”

Soles was set up by Ramesh and his friends on June 30, 2013. And thanks to their Facebook presence, within months, they had 1200 members which included doctors, IT professionals, businessmen, journalists, homemakers, students and lawyers. There is also a labourer, Mahesh, who works on construction sites. “He always comes for the Sunday run,” says Ramesh.

This takes place at 5.30 a.m. It begins from the Kadavanthra area in Kochi, and ends up at the Jawaharlal Nehru International Stadium, a distance of 8 kms.

This is the day when beginners are initiated. “There are many who walk the distance,” says Ramesh. “I tell the newcomers they should run for five minutes, and walk for two minutes. Then run again. As a result, they will not hit a mental or physical wall, and will be able to complete the run.”

Of course, sarcastic comments by bystanders are part of the baggage. “When they see me running, in shorts, sometimes they will shout, ‘Hey man, did you lose your trousers along the way?’” says Ramesh, with a smile.

Meanwhile, one day, in February, this year, Mathew Mapram came up with the idea to hold a marathon race. Mathew, who is of Kerala origin, is a veteran marathon runner in the USA. “He belongs to a large network of people who are passionate about running,” says Ramesh. “Mathew wanted to give them an experience of running in India.”

Ramesh and his co-founders felt jittery about conducting a marathon, because they had never organised one. But, thanks to Mathew's goading and encouragement, Soles held the Spice Coast Marathon on November 16. Around thousand runners took part, including several from the USA.

One of them was the silver-haired Steve Boone, 65, who has run 591 marathons all over the world. “Unlike other races, conducted by event managers, there was a lot of heart in this race, because it had been organised by the runners themselves,” says Steve. “The people were friendly and nice. I enjoyed every moment.” For Ramesh, the most thrilling moment occurred, when, runners at the finishing tape, shook his hand, and said, “Great race.”

Indeed, the unique nature of this particular marathon (42 kms) was the 42 heritage sites which the runners had to pass by. These included the Cochin Port Trust, Mattancherry bridge, Jewish Synagogue, Jew Town, Dutch Palace, Spice Market and the Parade ground. “We will be holding the marathon again the next year,” says an upbeat Ramesh. “Soles is here to stay.”

(Published in the Sunday Magazine, The New Indian Express, South India and Delhi)
at December 15, 2014