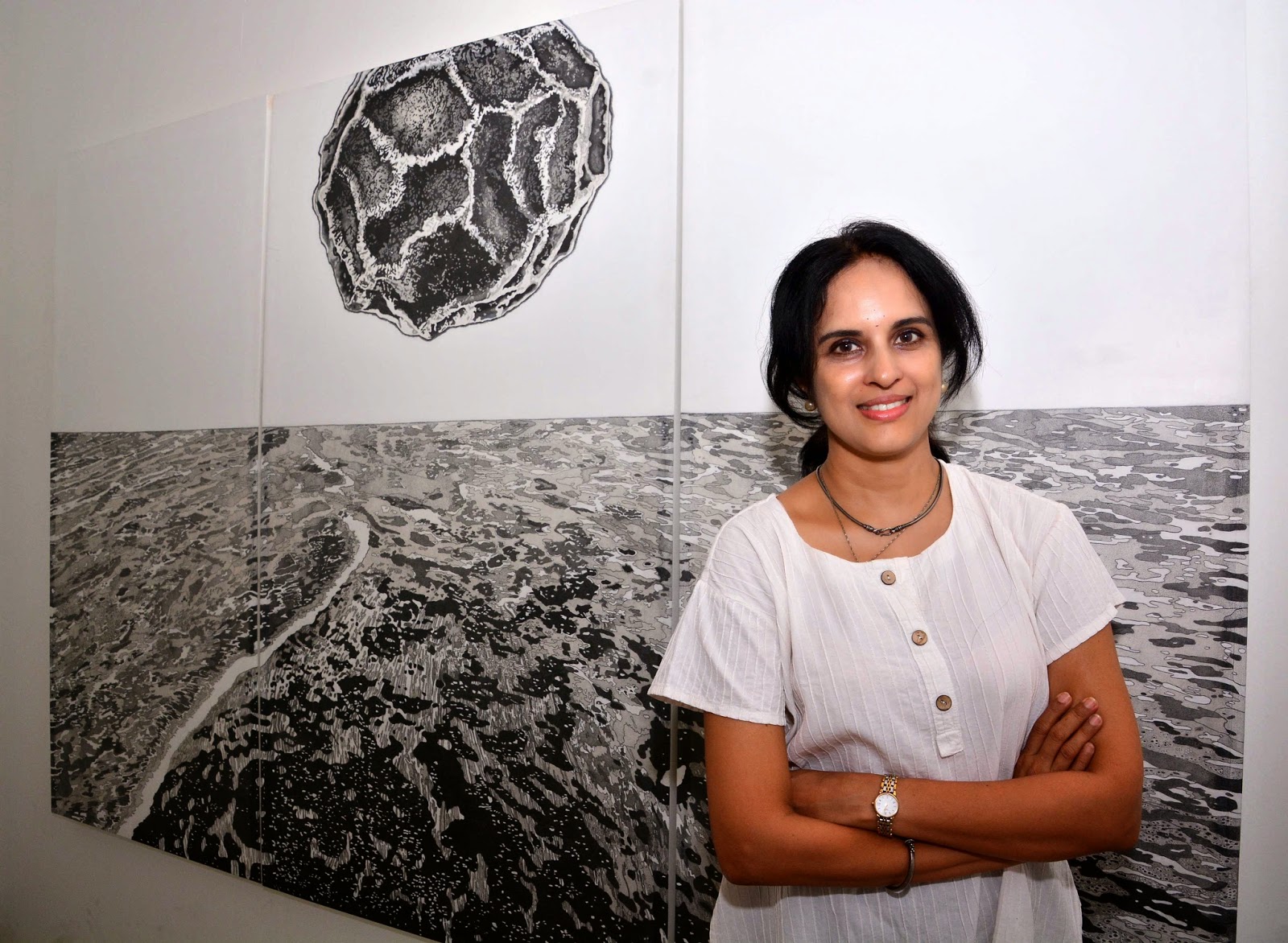 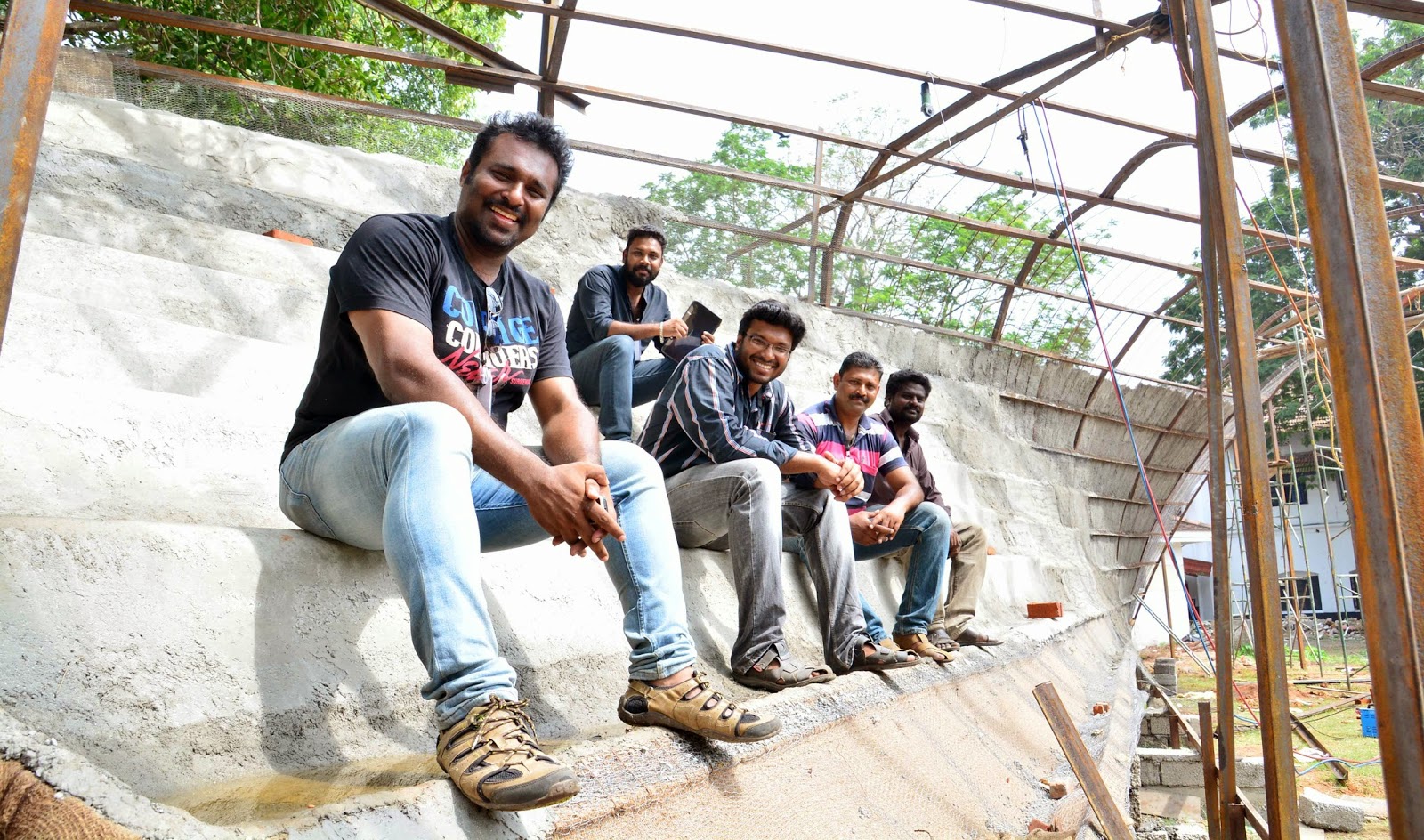 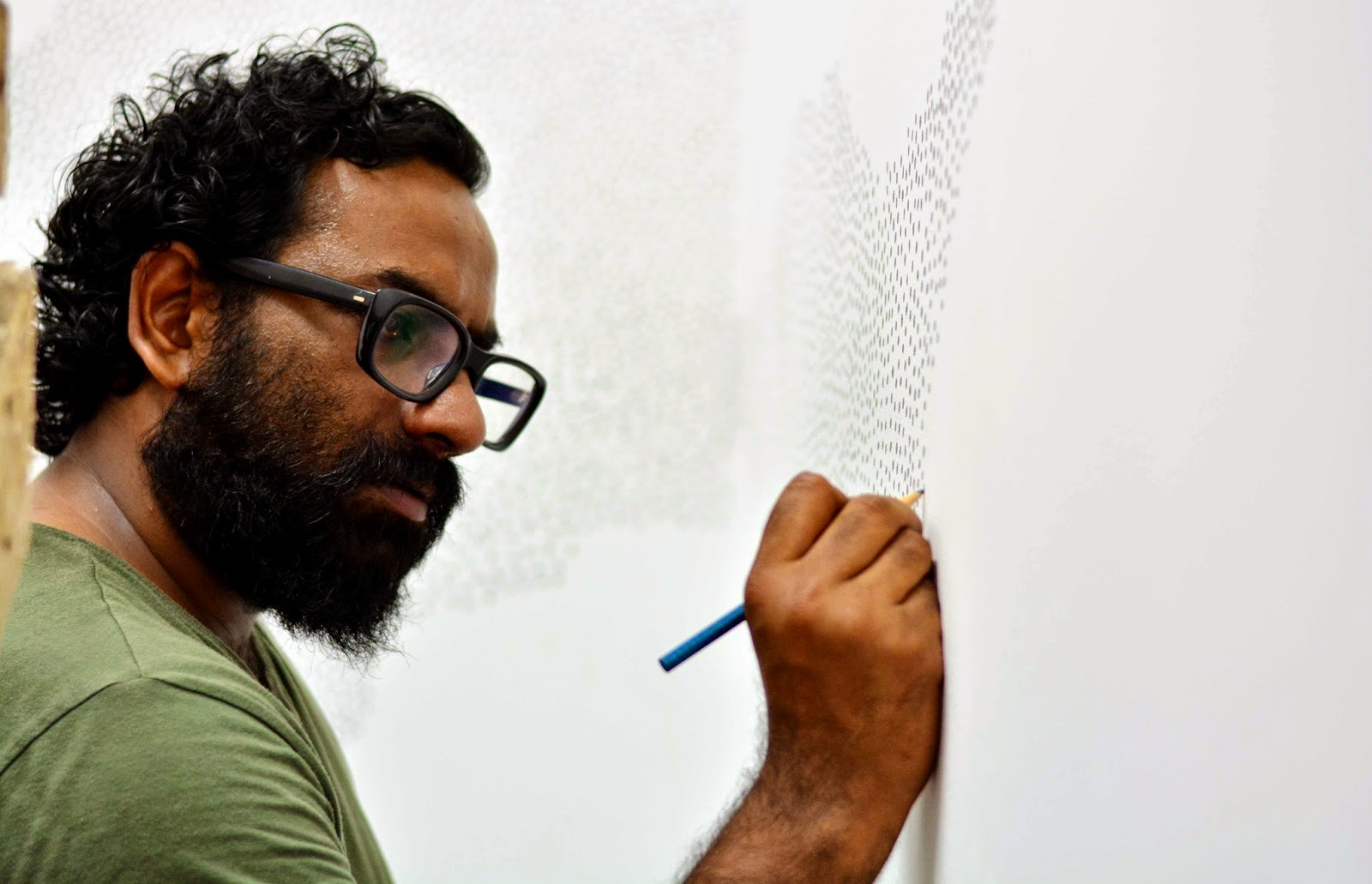 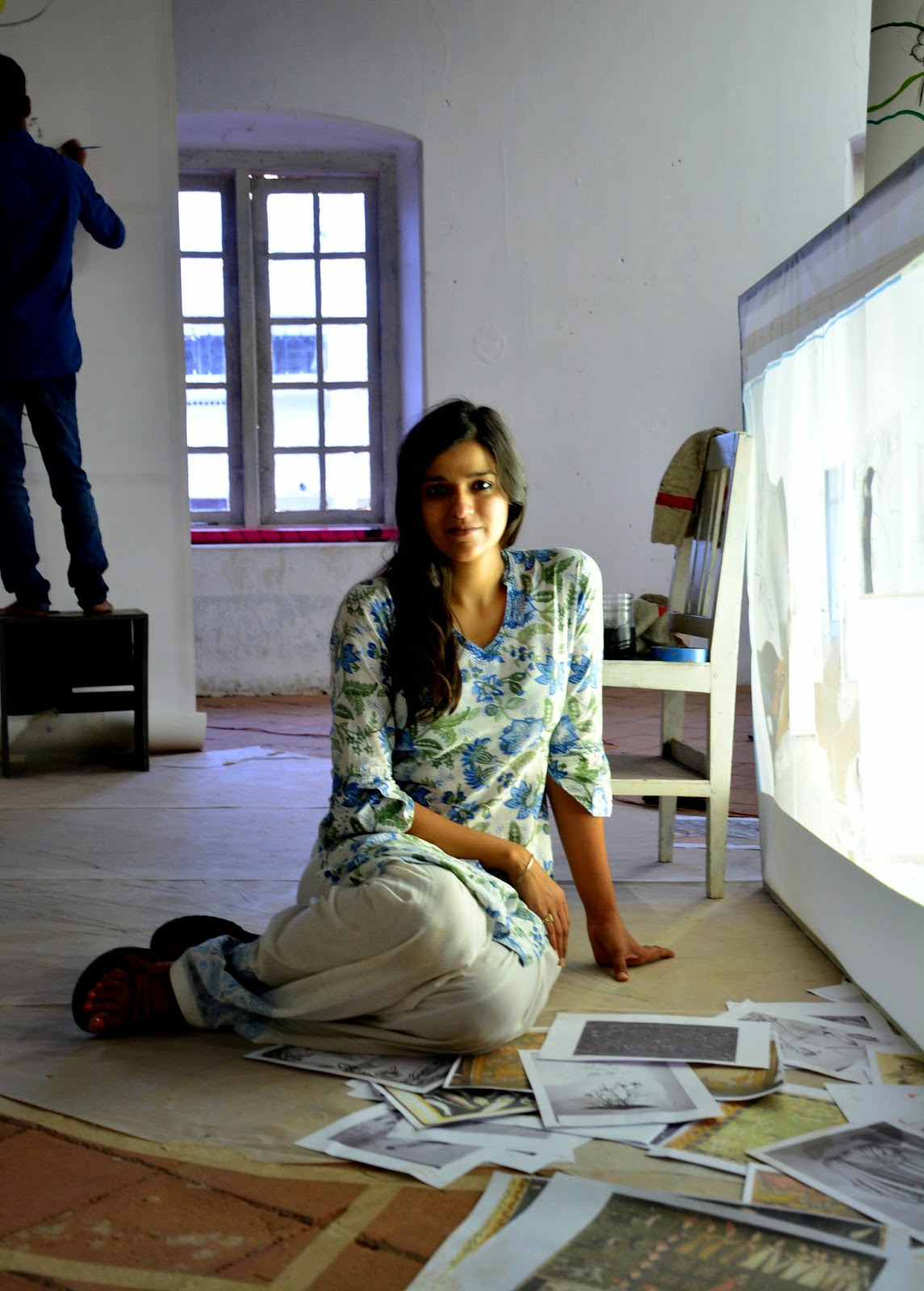 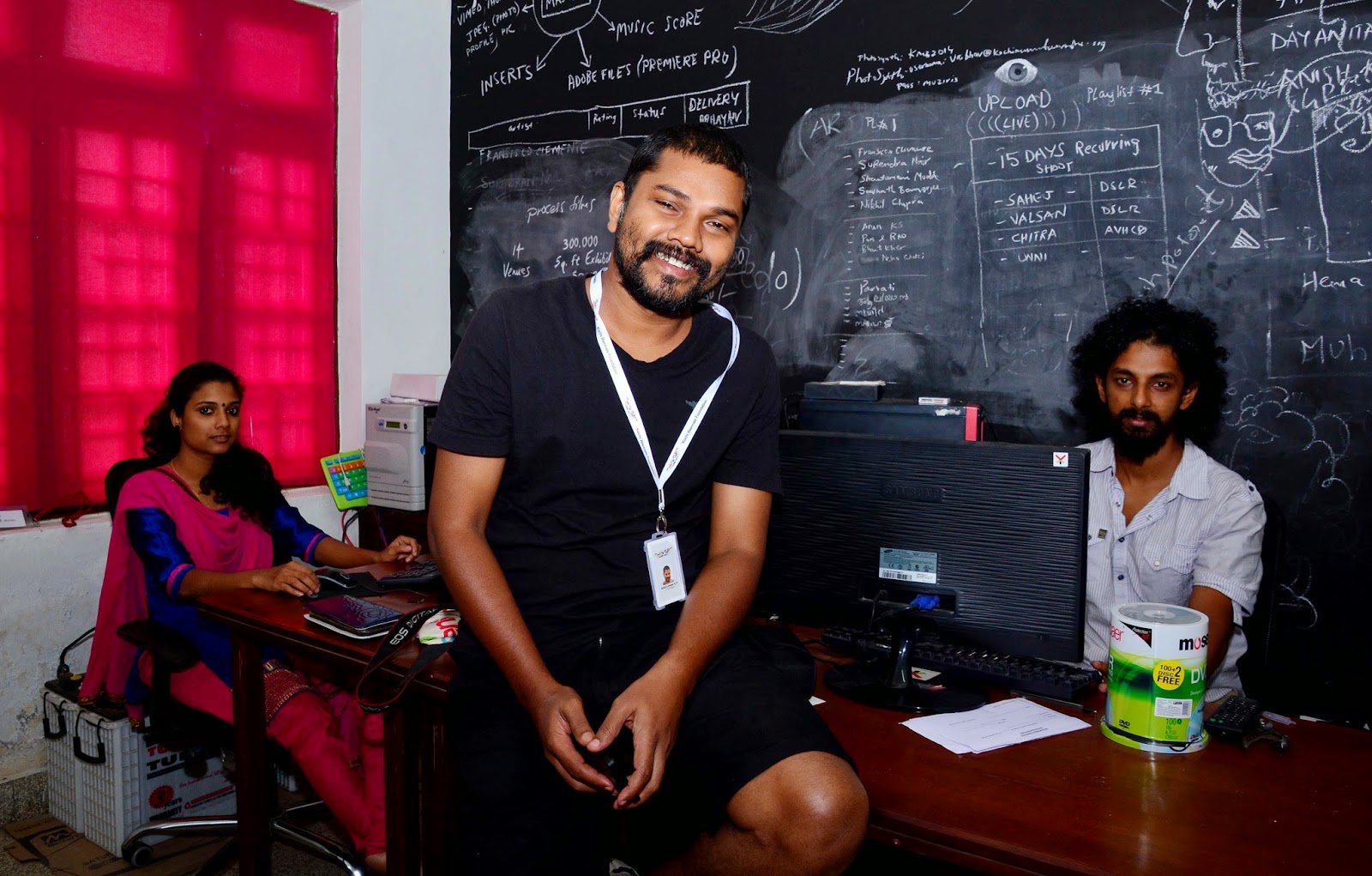 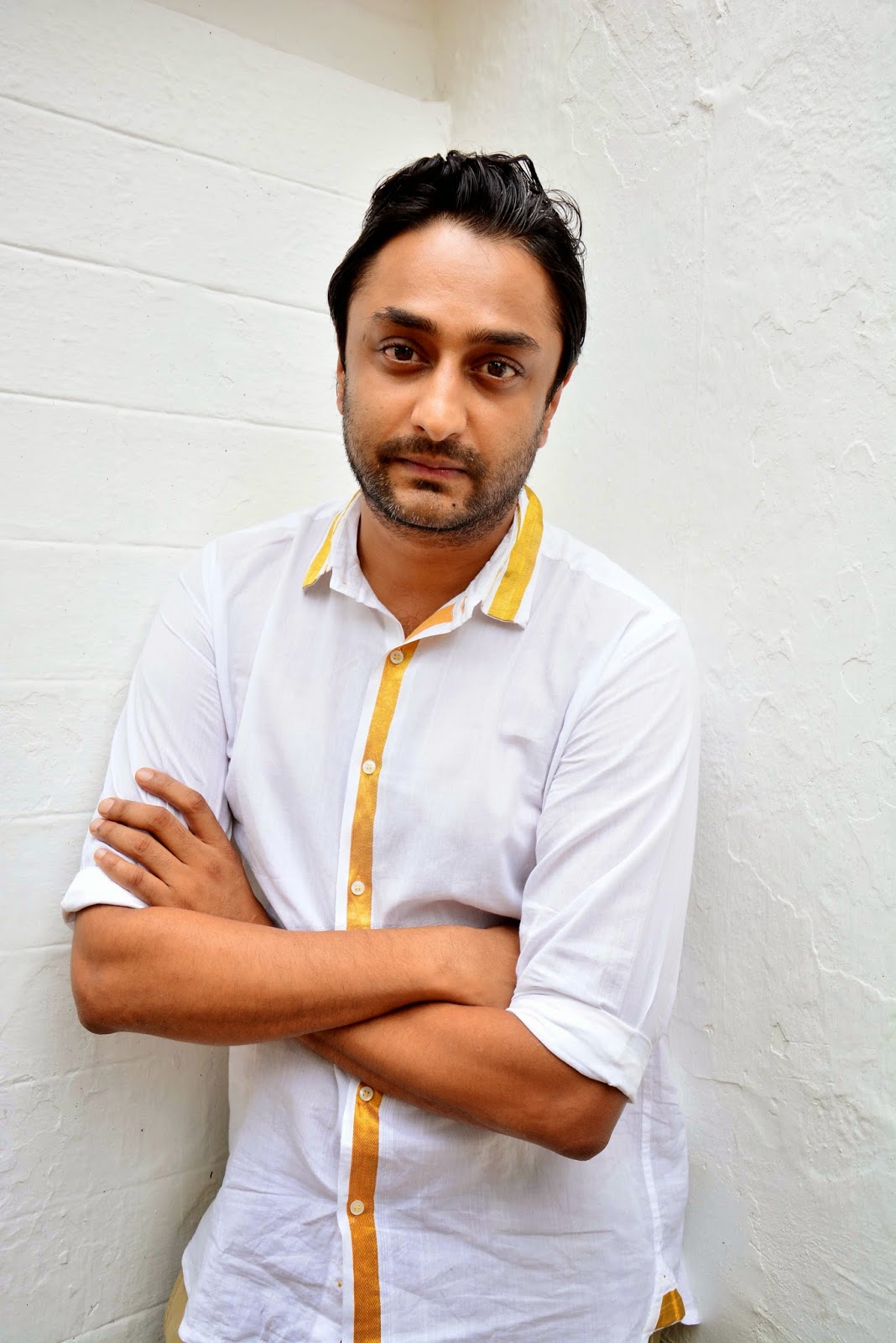 Captions: Parvathi Nayar; Architect Vinu Daniel and his team; artists D. Sunoj and Sumakshi Singh; members of the media team of the Kochi Biennale Foundation and Shwetal Patel, Co-Ordinator (Exhibitions) of the KBF

It is a sunny morning in Fort Kochi. A breeze is blowing from the Arabian Sea. Inside the Aspinwall House, the premier venue of the 2014 Kochi Muziris Biennale, a man is banging a nail into a piece of wood. At another side another worker is using a metal cutter, which is creating a shrieking noise.

One can see empty paint cans, wooden planks, and a large crate, encased in plastic, which contains the works of artist Arun KS, which has come all the way from Sante Fe, California, USA. A sticker at one side says, 'Protect from the elements' and has a drawing of raindrops falling on an umbrella.

Along a pathway, Divya Jain has placed her camera on a tripod and is looking through the lens. Standing next to her is Raj Shekhar Kundu, in a red T-shirt and blue jeans. They are students of the Srishti School of Art Design and Technology in Bangalore. “We are doing a video installation of how the art works links to the Biennale sites,” says Divya.

Standing near them is architect Vinu Daniel, wearing sunglasses. His company is making an umbrella pavilion, where the talks and seminars will take place. “The walls and the sloping roof will be a mix of a mesh, concrete, and jute sacks,” he says. The design looks unique. At one side, there is a gallery where people can sit and the other end curves upwards and becomes part of the roof.

In a ground floor hall, Indian artist Parvathi Menon is overseeing workmen as they install fluorescent lights. A few printouts of her poems have been pasted on the walls. One of her works, a remarkable pencil drawing, part of her installation called 'Fluidity of Horizons', is already up on one of the walls.

The artist, who looks casually elegant in a white T-shirt and jeans, suddenly smiles and says, “I am all excited to be taking part in this Biennale, because my roots are in Kerala.”

On the first floor, in another building, Malayali artist Sunoj D is putting up his installation, 'Zero To The Right'. Sunoj is converting $2000 into Dirhams and Indian rupees. “The dollars are being marked in lines as bunches of five, dirhams as single lines, whereas the Indian rupees 1,25,427 (in exchange rate) are being marked as dots,” he says. “An audio recording will call out these numbers in Arabic, Malayalam and English. I am trying to show the relative value of money.”

He is being helped by volunteer Irma Christ, a German artist and teacher. “I am travelling all over Asia,” she says. “I never knew a Biennale is about to take place in Kochi. But now I am helping out Sunoj. I don't know how long I will stay, but I am loving it here.”

She breaks out into a wide smile, when a Biennale volunteer introduces himself as Clins. “It is a short form for Klinsmann (the great German footballer),” says Clins. “My uncle is a fan.” Irma says, “Klinsi is going to love it that somebody has been named after him in a land so far away.”

On the first floor of the Pepper House, Delhi-based artist Sumakshi Singh has hung long sheets of paper, in which plants are drawn. They have been taken from the 'Hortus Malabaricus' (1693), a book written by Dutchman Hendrik van Rheede, the then Governor of Malabar, about the flora in Kerala. “I have exhibited all over the world, but the Pepper House is such an unique setting,” she says. “Look at the wooden beams, and the tiled roofs. This place has personality!”

Indded, not only Pepper House, but Fort Kochi has personality. Edgar Pinto, the propreitor of the Old Harbour hotel says, “We will expect a lot of art lovers from all over the world during the Biennale,” he says. “Big and small hotels and homestays will benefit collectively. In the end, there will be a positive impact on the local economy. We are excited about it.”

Members of the foreign media are also getting excited about the event, which will be inaugurated on December 12.

Zehra Jumabhoy, contributor to Artforum International Magazine, New York, says, “I loved the first iteration of the Kochi Biennale, and am excited about the second one. Yes, Kochi is an established Biennale in the art world, but two swallows don't make a summer. I hope there will be more Biennales after this one.”

Dr. Sabine B. Vogel, a freelance art critic for the daily newspaper ‘Die Presse’ in Vienna, says, “I expect site-specific artworks which deal with the local context. Kochi got onto the map of the global art community with the first fantastic biennale and I am excited to see the second edition. The sites, along the waterfront, give such a special atmosphere. And Kochi is such an extraordinary place!”

The Kochi Biennalle Foundation (KBF) office is also an extraordinary hive of activity. In the courtyard of the rented bungalow, Shwetal Patel, Co-ordinator- Exhibitions, is walking around conversing animatedly on the mobile phone to a BMW company representative. “It's super-hectic now,” he says, as his 40 plus colleagues sit in large rooms, looking at laptops and taking calls. “But it will be ready on time. Biennales are fragile things, but this one is artist-driven and I am sure it will produce unique results.”

Shwetal spoke of the groundswell of support and goodwill shown by the local people. “That is heartening,” he says. But Chief Operating Officer PM Sirajuddin admits that funds are tight. He also admitted that the loans given by artists like KBF Directors Bose Krishnamachari and Riyas Komu for the previous Biennale have yet to be repaid. “But I am expecting a good support from the state government,” he says. “We will tide over the tough times. The Biennale will be a success.”

(A shorter version was published in the Sunday Magazine, The New Indian Express, South India and Delhi)
at December 08, 2014