Snapshots from the Hotspots 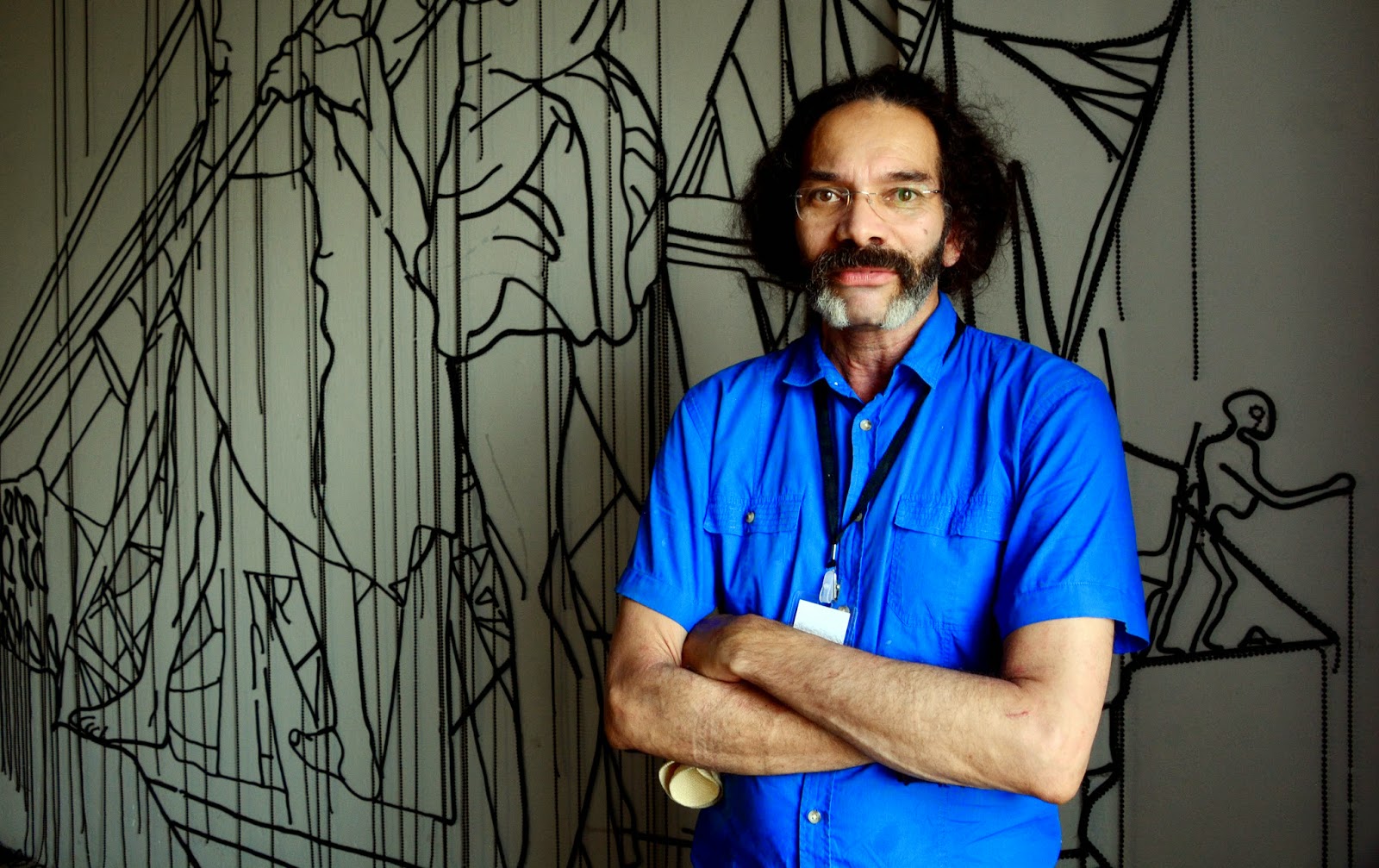 Vignettes from the different sites of the Kochi Muziris Biennale, which begins on December 12

In a ground floor room, at the Aspinwall House, British artist Hew Locke walks around, in a hat, blue shirt, Bermuda shorts and sandals. He has made striking images using black beads and cord. One shows trumpeters in the 15th century announcing the arrival of the King of Cochin. “I feel a bit weird,” says Hew. “Most of the scenes I am seeing now, from this window, are those that I have already seen online. So there is a collision between virtual and actual reality.”

As he talks, he seems to have an Indian accent. He smiles and says, “There are two reasons for that. Firstly, I have an Indian wife [Indra Khanna]. Secondly, I grew up in Guyana, where there are so many Indians.”

In fact, says the London-based artist, Guyana is very similar to Kerala. A couple of days ago, when he drove out to the suburbs, he looked at the scenery. “For a moment, I thought I was back in Guyana,” he says.

On a first floor balcony, a young girl, in a white top and black tights, is looking through a camera placed on a tripod. Her name is Elena Brunete, and she is a student from from the School of Architecture in Madrid, Spain. She is part of a team of four students and three professors. “We are putting up a prototype of a bamboo pavilion,” she says. “It's hot, but I am enjoying myself.”

A red-faced Marcus Schaub is also finding the heat a little difficult to handle. “Yes, it is hot,” he says, with a smile, as he sits on a cement ledge and smokes a cigarette. The Zurich-based Swiss is helping his friend, Christian Waldvogel set up his installation, 'The Earth Turns Without Me'.

“This is a small biennale, but it looks so comfortable,” he says. “It is like a tropical garden. And unlike biennales in the West, there is a nice mix of Western and Eastern art.”

Standing near Marcus is architect Vinu Daniel, wearing sunglasses. His company is making an umbrella pavilion, where the talks and seminars will take place. “The walls and the sloping roof will be a mix of a mesh, concrete, and jute sacks,” he says. The design looks unique. At one side, there is a gallery where people can sit and the other end curves upwards and becomes part of the roof.

Young Abu Backer Sidique is busy talking on a mobile. He is a product designer for artists Soren Pors and Aparna Rao. “I am helping them set up their electro-mechanical art works,” says Abu, an engineer.

Another youngster, in T-shirt and Bermuda shorts, Adam Jamir, has come all the way from Mokokchung in Nagaland. “I am assisting [Chinese artist] Yang Zhengzhong,” he says. “It's been fun so far.”

At one side, there is a growl of a concrete mixer. Inside a room, facing the sea, a hole in the ground is being made. One of the workers says that it has a depth of nine feet and a diameter of 11 feet. This is where the installation of famed London-based artist Anish Kapoor will be put up.

The Mumbai-based artist Prajaktha Potnis is looking relaxed. Her installation - a mix of sculptural and video installations, drawings, and a transcript pasted on the wall - is nearly up and running. But for a young person, she went back into recent political history to get inspired: the kitchen debates between US President John F Kennedy and Russian leader Nikita Khrushchev in 1959. “It's a discussion of capitalism vs. communism in a kitchen setting,” she says. “In fact, in life, so many conversations take place in a kitchen. Many government policies enter the kitchen, like the price of onions.”

She breaks out into a smile as the Delhi-based Malayali artist Gigi Scaria has made an appearance. His installation material, made of stainless steel, has just arrived, all the way from Coimbatore.

“I am making a bell, which is 13 feet high, with a diameter of 10 feet,” he says. “Through 64 holes, in the bell, water will come out, giving a look of a fountain.” Gigi has done a salute to the great writer Gabriel Garcia Marquez. He has called his work, 'Chronicle of the Shores Foretold'.

On the first floor of Pepper House, the Delhi-based artist Sumakshi Singh walks across to see the work of Navin Thomas, who lives in Bangalore. “This looks so magnificent,” she says, as she stares at the two huge archery targets, with their evenly spaced concentric rings, facing each other at a gap of 20 feet. “My theme is electroacoustic ecology,” says Navin. “These targets will communicate with each other, through sound waves.”

Noted artist Bharti Kher looks at her installation, which are triangles of wood, inside each of which swings a pendulum, and says, “I have not stepped out of this room for days.”

She is optimistic about the Kochi Biennale, despite the funds crunch. “Take it from me, in ten years, this Biennale will become an important art hub for India and the world.”

She says that the state should be supportive. “We have such a large country and yet, there are so few art events,” she says. “And that's a bit sad.”

Nevertheless, there is excitement among the volunteers, artists and visitors as they walk around, with a smile on their faces and a song in their hearts.

On December 12 an explosion will take place.

(Published in The New Indian Express, Kochi and Thiruvananthapuram)
at December 11, 2014