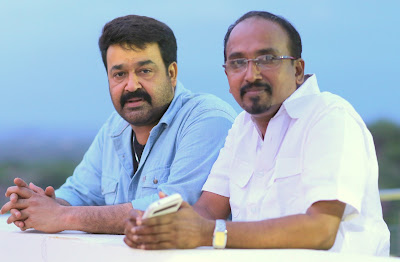 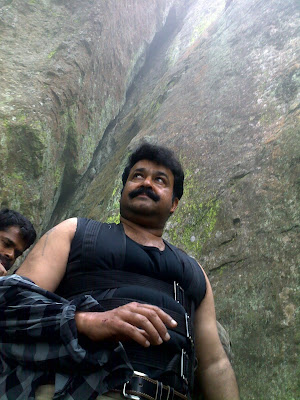 Scriptwriter S. Suresh Babu talks about his experiences in the films, ‘Shikkar’ and ‘Kanal’

Photos: Mohanlal with S. Suresh Babu (right); Mohanlal on the sets of 'Shikkar'

When the casting was being done for the film, ‘Shikkar’ (2010), a lot of names were suggested regarding the actor who would play the friend of Mohanlal.

“It was then that I suggested Sreenath, a brilliant actor, who was acting in television serials at that time,” says ‘Shikkar’ scriptwriter S. Suresh Babu. In ‘Kireedom’ (1999), he had played a friend of Mohanlal, so the latter also accepted the recommendation.

But when shooting began, at a bamboo forest in Kothamangalam, it was clear that Sreenath was not at his best. “Later, we heard that some ruffians had gone to the hotel in Kothamangalam, where he was staying, and threatened him,” says Suresh. “Apparently, he owed money to a lot of people.”

When the first part of the shoot was over, Sreenath was told that he could go home and would be called later.

On the morning of April, 23, 2010, a taxi driver arrived at the hotel in Kothamanagalam to collect him. But there was no response when calls were made to the room. Ultimately, the door was opened, by hotel employees, using the reserve key.

Sreenath lay unmoving on the bed. Police later said that he had committed suicide. “It came as a big shock to all of us on the set,” says Suresh. “We felt sad, because Sreenath was only in his fifties.” Shooting was suspended for two days, as the police had to conduct an enquiry. In the end, Lalu Alex played the role.

Near the end of the two-month long shoot, the climax was shot at Devil's Kitchen in Kodaikanal. This is a forest at a height, between a valley and three gigantic rocks. “It is a scene where Mohanlal's daughter, in the film, played by Ananya, is hidden there by some villains and he comes to rescue her,” says Suresh.

But it was a dangerous place. There are certain spots where there are holes in the ground through which one can slip through and fall all the way to the bottom. “You cannot survive such a fall,” says Suresh. “Guides had to use sticks and hit the ground ahead of them as they walked.”

Director M. Padmakumar decided to use four cameras. Out of the four, one of the cameras was to be placed at a lower level pointed upwards. As the crew members were going down, suddenly they came across a body lying on the branch of a tree.

It was a horrific sight: decaying flesh and pieces of bone could be seen, apart from a putrid smell. “Maybe, the man fell by accident or committed suicide,” says Suresh. “But the guides and forest officers told us that this was a regular sight, as many people went there to kill themselves.”

Despite these bad omens, when ‘Shikkar’ was released, it became a big hit. “So although I felt sorrowful about Sreenath's death, I was glad that, after all the difficulties, the film did well,” says Suresh.

On another occasion, Suresh went to Dubai to do research on a story on the global recession of 2008. While there, he met Kurup (name changed), a Malayali, who used to own four hotels. But the recession destroyed his business. “Kurup was staying in the storeroom of one of the hotels, because he had no place to stay,” says Suresh.

Kurup became the inspiration for the character of businessman Kuruvilla Mathew Iype (played by Atul Kulkarni) for the film, ‘Kanaal’ (2015), which was written by Suresh, and starred Mohanlal and Anoop Menon.

However, when the United Arab Emirates government refused permission to shoot the film in Dubai, because the theme was recession, the crew shifted to a labour camp in Doha, Qatar. After a careful search, they discovered a small and shabby room to do a few scenes. In fact, a Malayali, Ravindran (name changed) was using that room.

After the shoot was over, Suresh told Ravindran about the theme of the film. “Ravindran became emotional,” says Suresh. “He told me that he had been doing very well as a businessman in Dubai, but lost everything in the recession. So, he came to Qatar and was now working as a labourer. I thought to myself, ‘From Kurup to Ravindran, what a coincidence’. ”

(Published in The New Indian Express, Kochi, Thiruvananthapuram and Kozhikode)
at March 16, 2016