A Love For All Things Indian 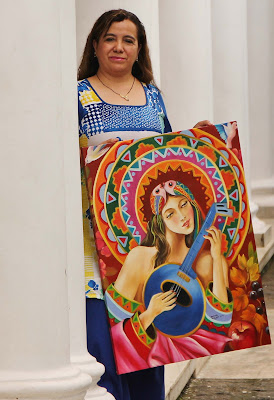 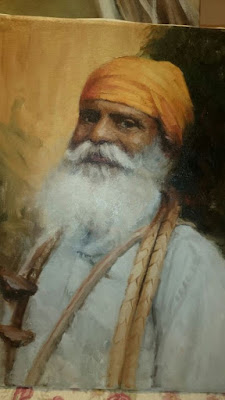 Backgrounder: The Brazilian artist Meri Amanda Calero could barely string two words of English together. So I would type a sentence in English on Google Translate and read out the Spanish version, since she is originally from Ecuador. Then she would reply in broken English and say a Spanish word, with emphasis. Which I would again put on Translate and get the English version. It was fun, but exhausting, for me, as well as local artist Manu, who sat in on the interview.

At a recent exhibition, at Kochi, the Brazilian artist Meri Amanda Calero showcased a couple of her works

A group of visitors crowded around the Brazilian artist Meri Amanda Calero, as she pointed at her painting of an Indian holy man at the Durbar Hall Gallery, Kochi.

The oil on canvas showed a man, with an overflowing white beard, as well as a thick moustache. The eyes and the lips seemed to hint at a smile. A colourful orange turban adorned the head.

“I met this man in Jaipur last year,” she says. “He was a wise man, and deeply spiritual. But I don't know his name. We exchanged smiles and held hands. And I felt inspired enough to do a painting.”

But her second work is completely different. It is of her 15-year-old niece, Sabrina who lives in Ecuador.

In Sao Paulo, where Meri lives as a naturalised Brazilian, she earns her living as a cardiologist. But every now and then she returns to her home country of Ecuador to meet up with her family. And Sabrina served as an inspiration.

The image is of a young girl, with rouge on her cheeks, sensual red lips, but with a distant look in her eyes, playing the mandolin. “She is singing the pasillo, the national music of Ecuador,” says Meri. “The songs are about heartbreaks and nostalgia for the past.”

Meri got the opportunity to take part in the Kochi exhibition when he met a Malayali artist, Manu, at an art event in Delhi last year. “I invited Meri to take part in our 'Worldwide Art Movement' group exhibition,” says Manu. “And Meri readily agreed.”

And, on her first visit, she has a very high impression of Malayalis. “They are happy, relaxed, and have a helping attitude,” she says. “In Kerala and India, a lot of importance is given to art and culture, unlike in Brazil.”

So, Meri says, it is difficult to be a full-time artiste in Brazil. She works on her art in the late evenings or the early mornings, after her regular job. “And as and when I get the chance I come to India,” she says.

Her fascination with the country began when, as a teenager, in Quito, she saw an exhibition of Indian artists. “The colours were so bright and attractive,” says the 40-year-old. “I wanted to immediately come to India.”

But she could only do so in 2013. “I feel very happy when I am in India,” she says. “This is my fifth visit. As an artiste, it is a place that provides me with enormous inspiration.”

However, Brazilian artistes are looking westwards for guidance. “In fact, the biggest influence on them is the American artist Morgan Weistling,” says Meri. “I tell them they should come to India, to become better artistes. But nobody has followed my advice, as yet.”